The first African American Roman cardinal in the United States is not expected to be a quiet one. It’s not his style.

Wilton Gregory was one of 13 Roman Catholic cardinals elevated 28 by Pope Francis, who according to National Public Radio, has appointed 73 of the 128 cardinals qualified to elect the next pope. 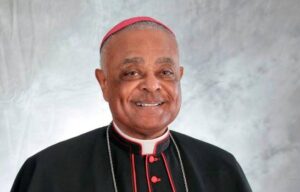 After President Donald J. Trump and First Lady Melania Trump visited the Saint John Paul II National Shrine in Washington, D.C., NPR quoted Gregory as saying he, “certainly would not condone the use of tear gas and other deterrents to silence, scatter or intimidate them for a photo opportunity in front of a place of worship and peace.”

According to the Archdiocese of Chicago where Gregory previously served, “In his years as president of the United States Conference of Bishops and beyond, he has been at the forefront of moving the Church to repair the damage of child sexual abuse and confronting racism in all its forms.”

In a video posted by Catholic News Service on Nov. 24, Wilton said he hoped to work with Joe Biden, the second Catholic president in U.S. history.

“100 Questions and Answers About African Americans” is available from Amazon or the Front Edge Publishing bookstore. A Bias Busters guide about U.S. Catholics is scheduled for work in 2021.

This entry was posted in African Americans, Roman Catholics. Bookmark the permalink.