Hop on over to the Smithsonian Institution’s Celebrate! Where Asia Meets America.

You’ll find art, artifacts and audio recordings, all pulled together into one site from various Smithsonian Collections.

May was designated Asian Pacific American Heritage Month in 1992. The month contains two significant dates. The immigration of the first Japanese to the United States came on May 7, 1843. And, May 10 is the anniversary of the completion of the transcontinental railroad in 1869. 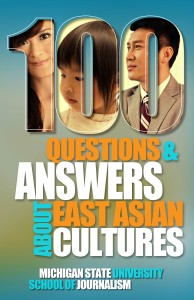 We began creating this series with the very idea of having people larn about each other. In fact, we startd this series of cultural competence guides by working on the Asian-American connection.

We kicked it off with 100 Questions and Answers About Indian Americans because a large number of engineers and designers from India had been hired to work for Consumers Energy, not far from East Lansing, where Michigan State is located. When the university saw the first guide, it asked us to publish 100 Questions and Answers About Americans to help the large number of students who were coming from China to study.

Quite naturally, that suggested the complementary guide, 100 Questions and Answers About East Asian Cultures, which we designed to help Americans, especially students, get to know people from China, Taiwan, Korea and Japan.

This Asian Pacific American Heritage Month, open up or connect your world by enjoying some of the resources on the Smithsonian site or by reading a Bias Buster.