Two stories about Indigenous people came crossed each other recently. One informs the other.

One story, out of Canada, told of the discovery of hundreds of unmarked graves of children who died years ago at the Kamloops Indian Residential School. Across Canada, such schools stripped First Nation children of their language and heritage. In the worst cases, children were abused and died. But in other cases, they grew up with damage that they carried with them. And that leads us to the second story.

In the United States, Native News Online reported that the National Congress of American Indians issued a statement saying it “has repeatedly called for transparency and accountability for the historical and generational trauma caused by Native American boarding schools in the United States.” 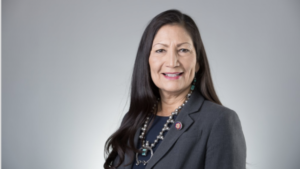 And that takes us close to the related story and Deb Haaland, the first Native American Cabinet secretary. Still in her first month as secretary of the U.S. Department of the Interior, Haaland targeted the high number of missing or murdered Indigenous women.

Mother Jones cited the Coalition to Stop Violence Against Native Women, writing, “Native women are 10 times more likely to be murdered and more than half experience sexual violence in some form. The National Crime Information Center notes that of the 5,712 reports in 2016, only 116 cases were logged in the US Department of Justice’s federal missing persons database.”

The problem is not just one of the disconnect between tribal and U.S. criminal justice systems.

The National Indigenous Women’s Resource Center 10 years ago linked the problem to long-running problems and wrote, “Prostitution is a sexually exploitive, often violent economic option most often entered into by those with a lengthy history of sexual, racial and economic victimization. Prostitution is only now beginning to be understood as violence against women and children. It has rarely been included in discussions of sexual violence against Native women. It is crucial to understand the sexual exploitation of Native women in prostitution today in its historical context of colonial violence against nations.”

Learn more in “100 Questions, 500 Nations: A Guide to Native America.” It is available from Amazon or the Front Edge Publishing bookstore.

This entry was posted in American Indians, Native Americans. Bookmark the permalink.