Since comparing mask mandates to the Holocaust, U.S. Rep. Marjorie Taylor-Greene (R-Georgia) has been receiving a barrage of criticism. 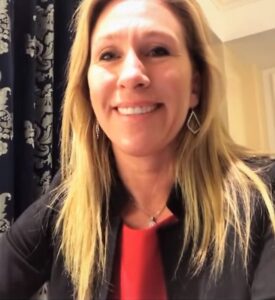 The Associated Press reported that Taylor-Greene “excoriated safety protocols adopted by House Democrats, including a requirement that masks be worn on the House floor. She also called House Speaker Nancy Pelosi ‘mentally ill’ and suggested that the rules were comparable to the treatment of Jews during the Holocaust.”

Taylor-Greene went further, the AP wrote, saying, “You know, we can look back in a time and history where people were told to wear a gold star. And they were definitely treated like second-class citizens, so much so that they were put in trains and taken to gas chambers in Nazi Germany.”

Fellow Republicans have objected. House leader Kevin McCarthy, (R-California) was quoted as saying “Marjorie is wrong, and her intentional decision to compare the horrors of the Holocaust with wearing masks is appalling. … The fact that this needs to be stated today is deeply troubling.”

When an actual punishment was not forthcoming, CNN’s Stephen Collinson wrote, “Greene’s apparent escape from serious consequences for her rhetoric cheapens one of history’s worst crimes.”

People have largely learned that the Holocaust was an event without equal. Invoking the Holocaust to elevate criticism of other events such as mask-wearing is seen as such an over-reach that it trivializes the Holocaust. That is where such strong reactions come from.

From the Bias Busters guide “100 Questions About American Jews:” “The Holocaust took place between 1933 and 1945, although the worst part began in 1939. According to the Encyclopedia of the Holocaust, based on research at Yad Vashem, Nazis killed Jews from more than 20 countries in the Holocaust. Most were killed in Europe, particularly Poland, Germany, Ukraine, Lithuania, Hungary, Austria and France. In some countries 90 percent of the Jewish population was killed. All six death camps were in Poland.

… It is estimated that 6 million or more Jews were killed during the Holocaust. An exact number is difficult to know. Reasons for that include the length of the Holocaust and inconsistency and gaps in records. Research is still going on.