Bodhi day will enlighten you

It is not your imagination. The end of the Gregorian calendar that predominates in the United States really is crowded with religious holidays.
There is one December holiday, Bodhi Day, which consistently falls on Dec. 8 and might have escaped your attention. 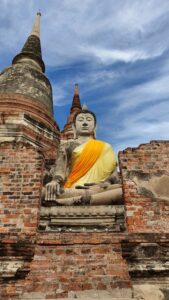 Photo by Kristen Barrett on Unsplash

Bodhi means enlightenment, and Buddhists celebrate this as the day Siddhartha Gautama, the founder of Buddhism, achieved enlightenment through meditation.

For 2,500 years, the Buddha’s awakening has been the central theme and example of Buddhism.

The Bias Busters team has largely completed “100 Questions and Answers About American Buddhists,” and hopes to make it available this year, along with some others.

This entry was posted in Buddhism. Bookmark the permalink.