Chaldeans set back by court’s no-call

A little-noted decision by the U.S. Supreme Court to not hear an appeal has dimmed Chaldean hopes about deportation.

Chaldeans are Catholic Iraqis. Hundreds of Chaldeans and other Iraqis have been detained by Immigration and Customs Enforcement under a 2017 Trump administration order. Most face deportation for having criminal offenses, some going back decades. Deportation became a possibility in 2017 when Iraq agreed to repatriate former citizens.

Chaldeans and other Christian Iraqis fear persecution and even death under Muslim rule in Iraq. 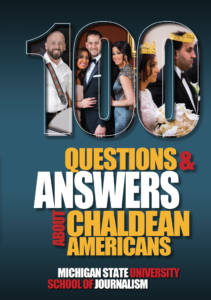 Trump appealed for the Chaldean vote in 2016, especially in the swing state of Michigan, the community responded, and now some Chaldeans say they feel Trump has betrayed them.

On a visit to the Detroit area in January 2020, Trump said, “You have a wonderful Iraqi Christian community in Michigan. And the congressmen were telling me on the plane (Air Force One), how rough it’s been for them. It’s been a very tough time for a lot of Christians all over the world. … We’re going to give those who need it an extension to stay in our country. And so we’re going to be extending them. A lot of people in Michigan have been asking for that. We’re going to … do everything we can to keep people who have been good to this country out of harm’s way.”

Martin Manna, president of the Chaldean Community Foundation and Chaldean American Chamber of Commerce, told the Free Press the community was seeking temporary protective status that could prevent Iraqis from being deported back to Iraq. Nothing has changed since then.

This month, reports The Arab American News, the U.S. Supreme Court let stand a ruling that courts are barred from stopping deportations so people can make their cases before immigration judges. In the previous month, the Supreme Court elevated the federal government’s ability to deport people with limited review in court.

This issue and a lack of knowledge about Chaldeans led the Michigan State University Bias Busters team to create “100 Questions and Answers About Chaldean Americans.” To learn more about Chaldeans and this issue, the guide is available from Amazon or the Front Edge Publishing bookstore.

This entry was posted in Chaldeans, Immigrants. Bookmark the permalink.