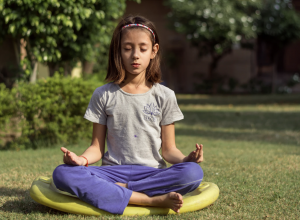 Photo by Jyotirmoy Gupta via Unsplash

Alabama in 1993 barred public schools yoga in public schools along with other practices such as “meditation” and “guided imagery,” under a general prohibition of the use of “hypnosis and dissociative mental states.”

The 27-year-old ban is being challenged by Democrats and Republicans on the Alabama House’s Education Policy Committee. The bill would require that “all instruction in yoga shall be limited exclusively to poses, exercises and stretching techniques” and that all techniques “shall have exclusively English descriptive names” and that “chanting, mantras, mudras, use of mandalas and 11 namaste greetings shall be expressly prohibited.”

The ban is being defended by a Christian advocacy group whose executive director on the basis of religious freedom. He calls yoga “the Hindu religion.” NBC News quotes Joe Godfrey, executive director of Alabama Citizens Action Program, as saying “It’s an issue of separation of church and state. You’ll hear people invoke that when it comes to Christianity, because they don’t want prayer in school. Yet they want to teach yoga?”

The nature and use of yoga are far from simple. Some Hindus maintain that Hinduism is not a religion at all, but a philosophy or way of life. Others argue that removing yoga from its religious and cultural context and treating it simply as a form of exercise is cultural misappropriation.

The Bias Busters team is working to bring out a guide about Hinduism and “100 Questions and Answers About Indian Americans” is already available from Amazon or the Front Edge Publishing bookstore.

This entry was posted in Indian Americans, Religion. Bookmark the permalink.