Can this veteran’s book save a life? Did it save the author?

This is Invest in Veterans Week, a good time to invest a little time in Tom Voss’ autobiographical “Where War Ends: Recovering from PTSD and Moral Injury through Meditation.” It is the story of a combat veteran’s decision to walk 2,700 miles with a fellow veteran in search of healing solace. 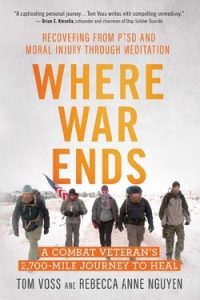 Voss, who served in a scout-sniper platoon in Mosul, wrote the book with his sister, Rebecca Anne Nguyen. The story is also told in a documentary, “Almost Sunrise,” which is being streamed for free on Amazon Prime.

As described by ReadTheSpirit online magazine editor David Crumm, Voss put his investment into facing the cost of combat that challenges one’s innate belief about the good in all of us. Crumm co-founded Front Edge Publishing, which sustains the Bias Busters series.

In his article, Crumm quotes some of Voss’ writing: “Some people call them heroes, but most veterans don’t feel like heroes, so there’s a disconnect between the actual experience of war and the perceived experience of it.”

The Bias Busters guide “100 Questions and Answers About Veterans” explains for civilians why many veterans cringe at being thanked for their surface and the myths–positive and negative–about men and women who have served. The guide is available from Amazon or the Front Edge Publishing bookstore.

This entry was posted in Veterans. Bookmark the permalink.