The rhetoric over sanctuary cities is heating up again. 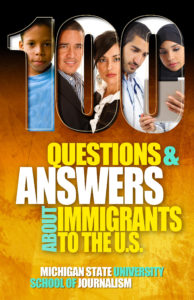 On Feb. 14, The New York Times reported that Trump ordered 100 SWAT-style U.S. Customs and Border Patrol tactical units, known as BORTAC units, away from the U.S.-Mexico border to sanctuary cities including New York, Chicago and Detroit.

BORTAC units are trained for criminal offenses and back up traditional ICE agents, but the redeployed units will be cracking down on mostly civil offenses.

The redeployment is part of Trump’s ongoing efforts to crack down on undocumented immigration, as was an attempt to withhold federal aid from sanctuary cities.

For more take a look at “100 Questions and Answers About Immigrants to the U.S.” is available from Amazon or the Front Edge Publishing bookstore.