Turbans, hijabs, beards to be allowed by U.S. Air Force 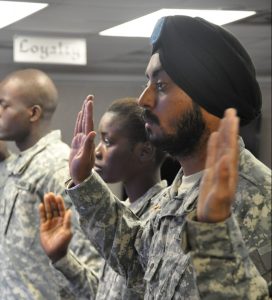 U.S. Army Spec. Simranpreet Lamba in a naturalization ceremony in 2010. He had an exemption to keep articles of faith including unshorn hair covered by a turban and his beard. Credit: Susanne Kappler

The U.S. Air Force is preparing to implement an approval process for Sikhs and Muslims to wear their articles of faith.

CNN reports that new guidelines will in most cases allow turbans, hijabs, beards, and unshorn hair that is “neat and conservative.” The U.S. Army adopted similar guidelines in 2017.

The Sikh Coalition maintains, “with the exception of the U.S. Army, the military still bans Sikhs from serving with turbans, unshorn hair, and unshorn beards. These discriminatory policies ignore the fact that Sikhs are able to meet safety and operational requirements in the U.S. Army and militaries throughout the world while maintaining their articles of faith.”

For more about Muslims and hijabs, get “100 Questions and Answers About Muslim Americans” is available from Amazon or the Front Edge Publishing bookstore.

This entry was posted in Defense, Indian Americans, Muslims. Bookmark the permalink.