Secretary of Veterans Affairs Robert Wilkie is to announce initiatives to help veterans at 10 a.m. Feb. 5, the morning after President Donald Trump’s State of the Union address. 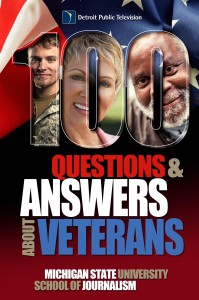 Cover of the Bias Busters guide, “100 Questions and Answers About Veterans: A Guide for Civilians”

The initiatives will be announced against the backdrop of protests from the Veterans of Foreign Wars and others.

On Jan. 24, VFW National commander William “Doc” Schmitz issued a statement that “The VFW expects an apology from the President to our service men and women for his misguided remarks.” The statement was about traumatic brain injuries suffered by troops from ballistic missiles Iran fired into a base in Iraq on Jan. 8.

The morning after that attack Trump said, “no Americans were harmed in last night’s attack by the Iranian regime. We suffered no casualties, all of our soldiers are safe, and only minimal damage was sustained at our military bases.” He said, “I heard they had headaches and a couple of other things. But I would say, and I can report, it’s not very serious.”

Six days after the VFW announcement, Defense Secretary Mark Esper said Trump “is very concerned about the health and welfare of all of our service members, particularly those who were involved in the operations in Iraq and he understands the nature of these injuries.”

Today, the Pentagon raised the number of U.S. troops diagnosed with traumatic brain injury, symptoms of concussions, to 64.

“100 Questions and Answers About Veterans” is available from Amazon or the Front Edge Publishing bookstore.

This entry was posted in Veterans. Bookmark the permalink.