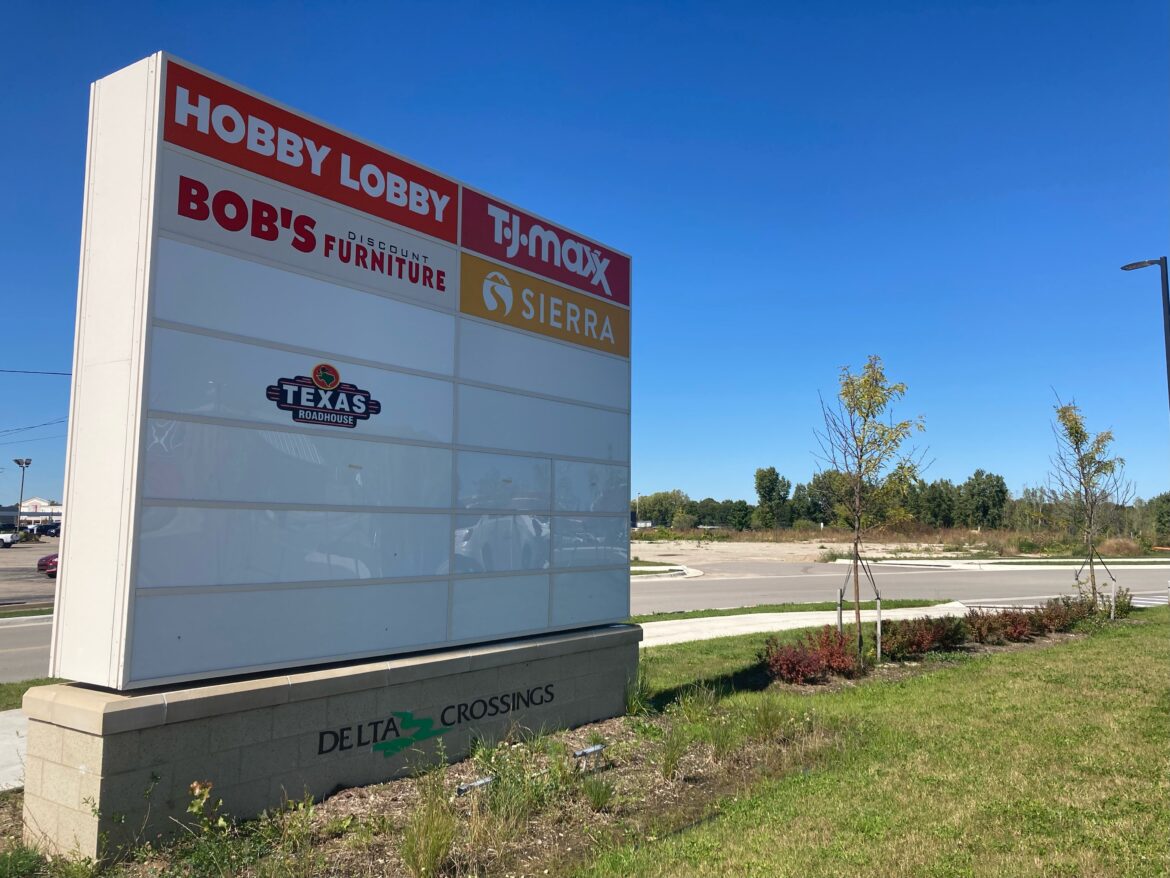 Delta Crossings sign depicting the few stores that have opened their doors to the public since construction began.

Progress is yet to be seen on phase three of Delta Crossings shopping center located off West Saginaw Highway.

Originally expected to be finished within five years, a lawsuit among multiple construction partners has halted most of the development on the project, leaving an official deadline up in the air.

Nestled between Interstate 96 and Broadbent Road in an empty, square plot of land sits Delta Crossings, a small strip mall with big intentions for the northwestern chunk of Delta Township. Approved by the board in 2019, the $200 million project was intended to draw traffic from Lansing and East Lansing toward Delta.

“It’s long been in the plans to develop that property near the freeway. So it’s brought some excitement and some new stores which were not here,” said Delta Township Manager Brian Reed.

“The corridor is definitely busier which is good for all businesses. We have seen an uptick of property values along the Saginaw corridor. [They] have been increasing in most cases so it has had a positive effect on the corridor,” Reed said.

Developer K2 Retail Construction Services filed a lawsuit in May 2022 against West Lansing Retail Development LLC, Spirit Realty and A&R Development LLC, among others, for violating their contract and failing to repay more than $4 million for labor, equipment and construction expenses.

K2 Retail has requested that some of the partners resign from the project before resuming development.

Phase two is set to be completed in December of this year with the opening of Olive Garden, At Home and Consumer’s Credit Union. Phase three consists of multiple-family housing units in an effort to bring more families into the area.

Though planning for the housing was already in the works, construction of phase three will not begin until the lawsuit has reached a resolution. Krstovski addressed the postponement in a letter to the township.

“I fully intend to make good on my promise to the Delta Township Board, Eaton County Commissioners and the community,” Krstovski wrote.

Despite setbacks, local residents are largely finding that having the shopping center in its current stages has been beneficial.

When asked about the new shopping center, local Delta resident Max Miller said, “I like it a lot. […] It could be easier to access. It’s kinda still convoluted until they get the rest of the roads in here and stuff. But once you plug it into Google Maps, it’ll get you here.”

Katie Billings, another Delta resident who was visiting Delta Crossings for the first time made a different suggestion.

As of now, the area is largely left undeveloped and empty in anticipation of continued construction.

Sydney MacNaughton is a junior pursuing her bachelor's degree in political science and broadcast journalism. She was born in West Lafayette, Indiana. She loves being involved in politics and learning about other communities. In the future she hopes to make documentary films to inspire people to learn more about each other and the world around them.