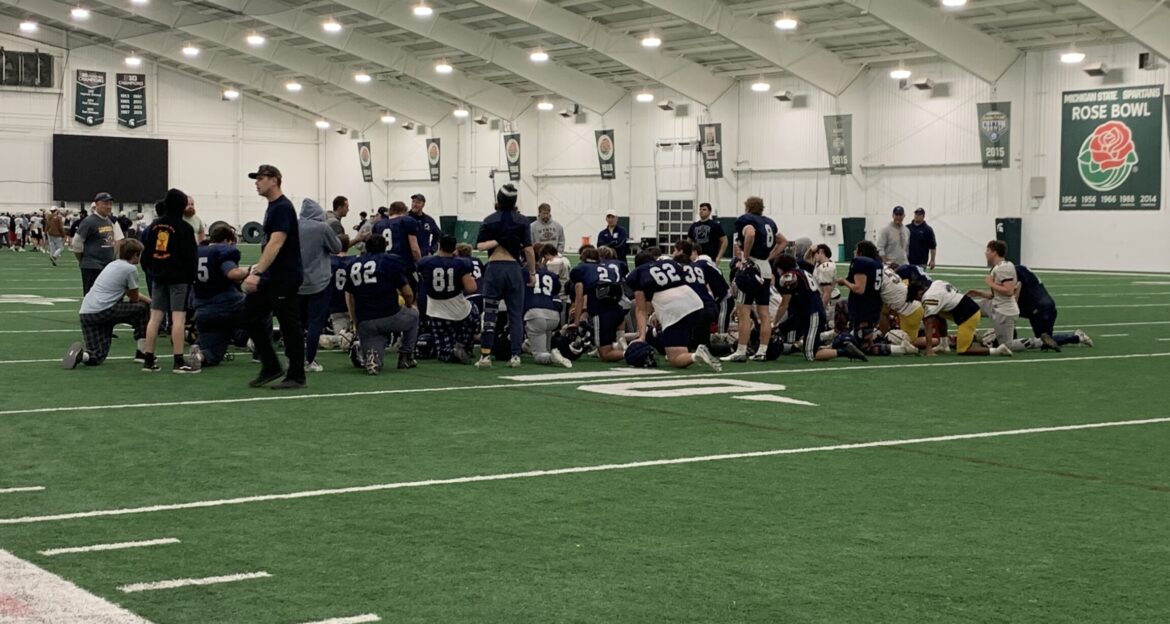 DeWitt varsity football team members huddle post-practice to talk about the schedule for the rest of the week leading up to their state championship game. The Panthers dealt with a less-restrictive 2021 season, which included fans in attendance for their championship game against Detroit King.

This year, every school is back playing full seasons in their sports with most COVID-19 restrictions left to the discretion of local districts. The Michigan High School Athletic Association gave schools the option of when and whether they wanted to have high school sports in the previous school year.

“If you had never seen what it was before the pandemic, you’d think that this was normal,” said Tim Simpson, who coaches boys and girls cross country and track and field at Lansing Catholic High School. “And it was pretty normal, the meets looked about the same as they looked two years ago.”

Simpson said a lot of his runners came to summer practices this year wanting a small sense of normalcy after spending the previous school year in a COVID society.

“The kids appreciate that it’s normal,” Simpson said. “Because it’s still not really normal anywhere now, in school they are supposed to wear masks … going to practice is the same as it had always been for them.”

Simpson said his sports — in which students compete and train outside — faced fewer challenges than others. Meanwhile, varsity cheerleading coach Kim Lindberg said she only had four girls to perform with a year ago. MHSAA rules say that eight is the minimum number of participants allowed in a competition without taking a penalty.

“So we go into these competitions taking a 10-point hit every single time and it’s not our fault,” Lindberg said. “We literally did not have more than four girls.”

Madison Kepros, who graduated this past year and has since enrolled at Michigan State University, said just having cheerleading in 2020 helped in many ways.

“The fact that I was a senior and that other seniors didn’t get some of their sports — their spring season — it really worried me,” Kepros said. “Cheer is one of my favorite sports ever and that’s just what really helped me grow in high school is that sport, so I would have been really disappointed if I couldn’t have a senior year of that.”

Kepros said having a team to lean on in tough times was important as well.

Lindberg said multiple girls received awards for their performances last year, as they battled through restrictions related to a worldwide pandemic.

Kepros won the Capital Area Activities Conference Senior Scholar Athlete Award and the school’s Spirit of Sport Award as well as was an All-League nominee and All-District honorable mention.

“It was just a really great finish to the year, the acknowledgement of all the accomplishments throughout COVID,” Kepros said. “I think it just showed that COVID couldn’t really affect us. … We didn’t let that stop us at all. We worked through all the barriers, we got our season and we were successful in it.”

Lindberg has been preparing her team for the start of the 2021 competitive cheerleading season, but that work is starting a little bit later than usual due to an extended sideline cheer season.

The Lansing Catholic Cougars wrapped up their 2021 football season Nov. 26, winning the Division 6 state championship. With football and sideline cheer in the rearview mirror, Lindberg and her team will look toward a normal competition season. But this year, Lindberg has eight girls to perform, meaning the team will not have to take a penalty every time members take the mat this season.

This year, the Panthers made a state run again, qualifying for the Division 3 state championship game at Ford Field, where they lost 25-21 to Detroit Martin Luther King.

“I think the biggest change from last year to this year is the pause,” said DeWitt athletic director Michael Brya, who is in his fourth season running the school’s sports programs. “Last season we went from practicing and playing to 59 days without a game.

“But I really give credit to the coaches and especially the players for maintaining focus through all of the craziness and win the state title last season.”

DeWitt varsity football head coach Rob Zimmerman is in his 23rd season at the helm for the Panthers. Despite winning the state title in 2020, he said he’s glad things are back to some sort of normalcy.

“I think the biggest thing for the players is that we’re back to normal,” Zimmerman said. “We’ve been able to approach things like how we’re used to approaching them — not only from an off-season standpoint, but for our practice schedule as well.”

Last season, the Panthers didn’t have fans behind them at Ford Field for the state championship game due to COVID-19 safety protocols. This season they did.

“We have great community support both at home and on the road,” Zimmerman said. “Last year, we didn’t get to have the community behind us. Thankfully, we’ve been able to make another state championship run to give the fans the experience they missed last season.”

Michael Markoch is from Bridgman, Michigan and transferred into Michigan State in 2020. His journalistic interests range throughout the sports world but mainly are focused on-air roles such as broadcasting or hosting his own live show. In addition to Spartan Newsroom, his reporting has also appeared on the Impact89FM website as a sports reporter.