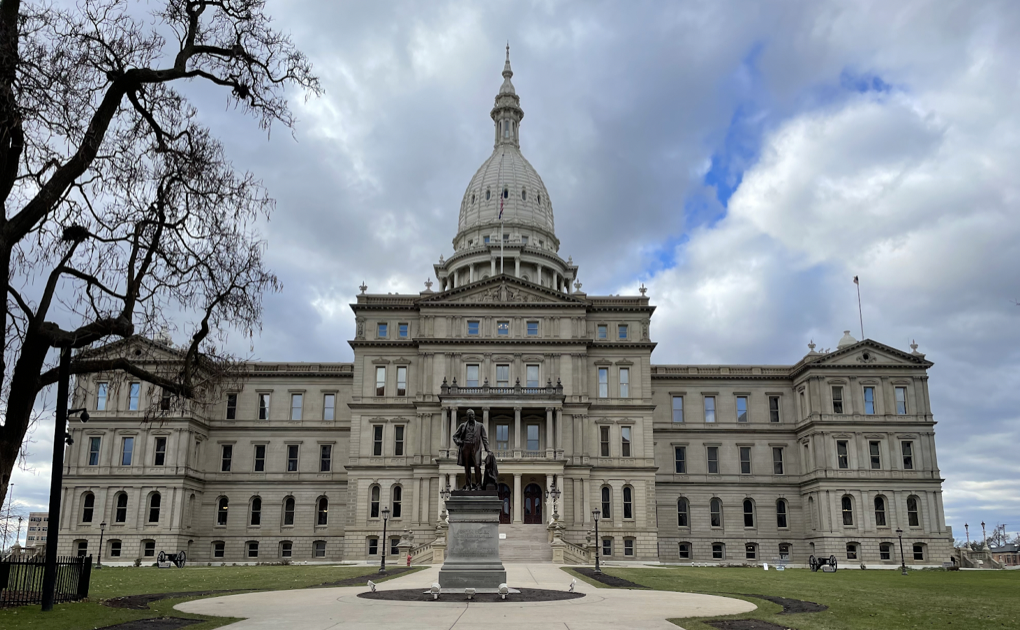 The Michigan State Capitol houses the legislative branch of Michigan as well as the offices of governor and lieutenant governor. The building is located in Lansing, Mich.

Incumbent Gov. Gretchen Whitmer will run for reelection in 2022, but the global pandemic may change the way voters in Williamston select a candidate, said residents of the city in each political party.

Democratic candidate Whitmer received a majority of the vote with 1,146 votes in her favor, beating the Republican candidate Bill Schuette by 342 votes.

However, during the pandemic, MSU junior and Williamston native Isaiah Daik, said he knows residents upset with Whitmer’s mandates to ensure safety such as shutting down schools and the stay-at-home order.

“Personally, in the total population of Williamston, I’m sure I’m in the minority when I say I was not upset with the various quarantine rules that were put in place at the beginning of the pandemic,” Daik said.

Whitmer’s actions proved to be divisive in Michigan with some crediting her to saving lives of thousands, and others protesting with guns outside of her home, blaming her for the failing economy.

From Feb. 2020, before the lockdown, to May 2020, after the lockdown, Whitmer’s approval rating dropped by eight percentage points, according to a poll done by the Detroit Regional Chamber.

“I know that, especially in Williamston, a lot of anti-Democrat and especially anti-Governor Whitmer sentiment was stirred up because of COVID,” Daik said. “There were tons of signs in various peoples yards with stuff mocking the ‘Pure Michigan’ slogan our state has with stuff like ‘Pure Moron’ and ‘My governor is an idiot.’”

Additionally, long-time Williamston resident Raj Wienet said the mask mandate should never have been lifted and the state legislature is to blame for the termination of the mandate.

“I fully support our current Governor,” Wienet said.  “She has managed crisis after crisis very well.”

Republican District 8 Chair Norm Shinkle said individual freedom is one of the many issues that will be important to voters in the upcoming election, and Republican voters are more likely to vote against candidates who are in favor of COVID-19 restrictions.

“I think all Republicans want to protect individual freedoms and don’t want lockdowns,” Shinkle said. “I haven’t seen any Republican advocate for a lockdown. I mean, I think we’re all united in that regard.”

Shinkle said a true Republican voter is looking for a candidate who wants people to follow the Constitution and not mandate what they can do every hour of every day.

“Whichever candidate expresses the most individual freedom for people,” Shinkle said. “The government got out of control, as a lot of Republicans believe.”

On the other side of the aisle, the Democratic Party is focusing on helping Michigan small businesses and workers through the end of the pandemic while still focusing on the health of citizens, said Democratic District 8 Chair Thomas Morgan.

“Democrats, by and large, are going to support the governor, and hardcore Republicans will oppose everything she does,” Morgan said. “As we look to the next election year, I think she, Governor Whitmer, has made some very tough choices, and she’s done what she could to help protect Michigan, and Michiganders bounce back.”

”It’s a balancing act for sure. I think she’s able to do it very well,” Morgan said. “No one’s perfect, but I think, given the circumstances, she’s done a pretty good job.”

Since the election is just under a year away, Morgan said it is too early to say what issues will for sure be important to voters. However, he thinks abortion rights, gun laws and the economy will be important, in addition to concerns surrounding the pandemic.

Michiganders look ahead to the 2022 election

Multiple Republican candidates have declared their intention to run against Whitmer, and many others are speculated.

However, with the difference of opinion on Whitmer’s handling of the pandemic and the changes in American life, it is still too early to tell how the 2022 election will go, said Daik.

“I’m looking for a candidate who will continue to share those same values (as Whitmer) and do their best to govern in a responsible way that will continue to look out for the well-being and best interests of everyone in Michigan,” Daik said.