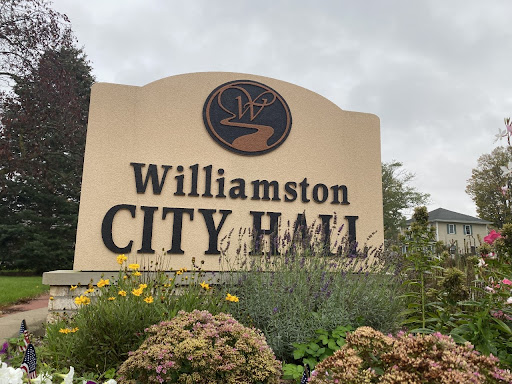 Williamston City Hall, where voters can register with the City Clerk.

At the start of the pandemic when most states around the country mandated lockdowns, Michigan was one of the states to have the most strict and stringent protocols as some appreciated Whitmer’s efforts in keeping the community safe, some such as Williamston business owner Gary Cube, said he did not.

“I think when she first started with all of the rules, like the stringent stuff, she was kind of overstepping her boundaries a little bit here,” said Cube. “When you look at other states and other countries and stuff at how they were managing it I think she was being too restrictive.”

Among the many COVID-19 protocols, Whitmer placed restrictions on the number of people allowed to gather in one place, limited the hours of operation for restaurants and social gathering venues, enacted a statewide mask mandate that must be followed in crowds of more than two people, and more.

“The mask mandate,” said Goble. “Even though it did turn out to not be a legal mandate, I thought it was a very good choice because not enough people were making that smart decision for themselves.”

Gubernatorial campaigns have started and one of the top issues is how and what they will do to handle COVID-19.

Shelby Deimling, resident of Williamston and Cosmetologist/Salon owner in Williamston, said there is a correlation between the virus and politics.

“I also feel like people are realizing and being a little skeptical of believing what’s true and what’s not and being fed false information like ‘we’ll do this, we’ll do that’ and then they don’t do it,” said Deimling. “I’m sure it will be, just because it has been a huge thing with all political things, like the number one issue with everything right now.”

Specifically talking about the possibility of Gov. Whitmer being re-elected, Williamston resident Chris Koon said something will need to be done when it comes to COVID-19.

“If she [Whitmer] were to get re-elected she’s got to do something or come up with something that’s going to show people that ‘hey you know, I’m not the only one that did it like this’ and then come up with better ways to deal with it,” said Koon.

In the past election, Williamston voted for Whitmer, as she won 57% of the vote in the city.

Co-owner of  Barrett’s Books in Williamston, Julia Mckenzie, has high expectations for the next state leader.

“I’m hoping to see more respect for our constitutional rights and a more freedom-minded sort of life and let live attitude from the next step here.”

For some, the idea of changing views on how to handle the COVID-19 pandemic from what has been put in place, to be less restrictive is enticing for voters of the next potential governor.

Michael Mckenzie, who is the Co-Owner of Barrett’s Books, said a different pandemic approach would be well received by the voters of Michigan.

“I think a governor that is more anti-COVID would be very well received by the people, ” said McKenzie. “I think the people of Michigan have spoken.”

Brendan Bruman is currently a junior majoring in Journalism at Michigan State University.

Isabella Gorisek is a junior at Michigan State University, majoring in Journalism, with minors in sports journalism, broadcast journalism, as well as documentary production. Being from Pittsburgh, Pennsylvania, Bella was born into being a sports fan. Growing up in the city of champions, she immediately found her passion for the behind-the-scenes aspect of any sporting event. With a strong creative side, and the ability to communicate well with others, Bella is looking forward to being able to be a voice for those in her community and share her passions with others.

I am from Grand Rapids, Michigan. I have played a variety of sports, including now in college as a part of the MSU rowing team. I am studying journalism and am looking forward to focusing more into Sports Journalism as a career. I love writing, and I am also interested in broadcasting as well as photojournalism.