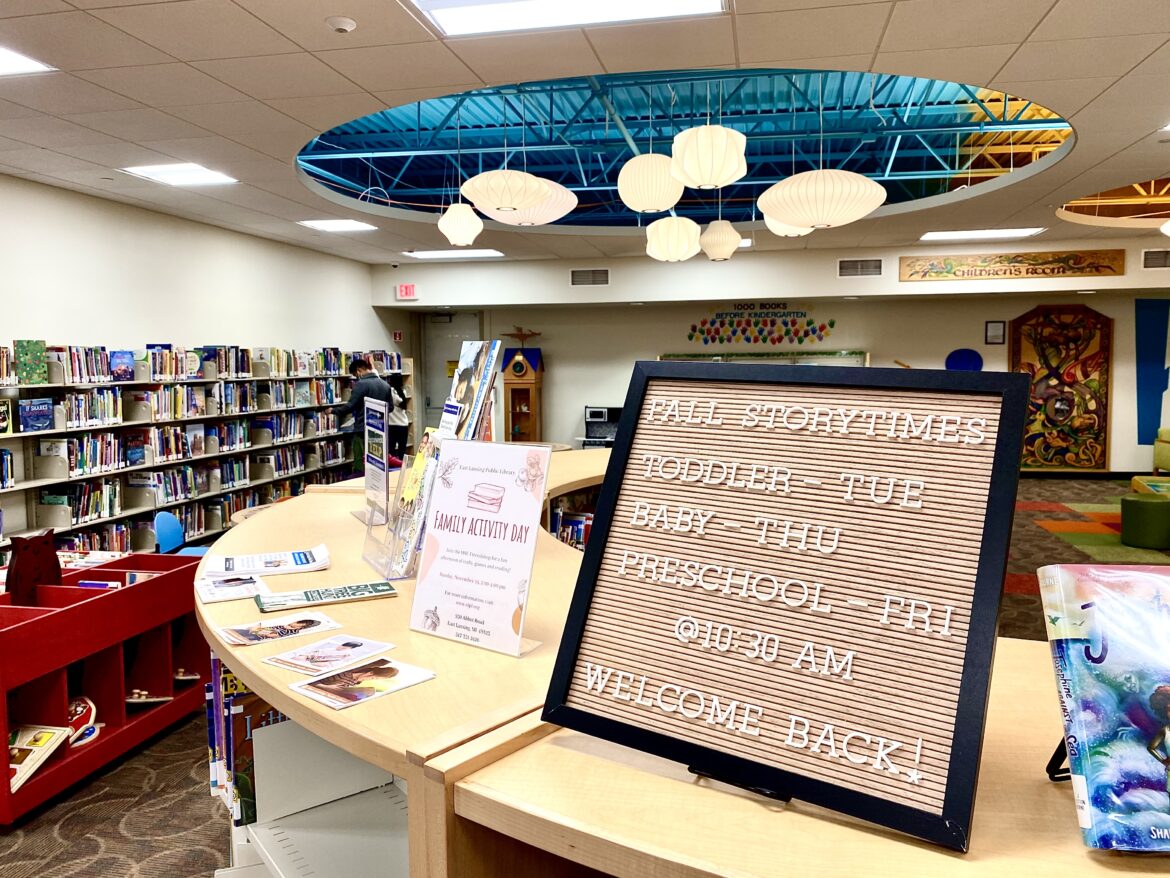 Storytime returned to the library on Tuesdays, Thursdays, and Fridays in the children's section.

October marked the return of Story Time, Monday Movie Matinee, and Teen Time at the East Lansing Public Library after a year of cancellations due to the COVID-19 pandemic. “We’re hopefully going to be increasing our in-person programming as long as the numbers are good,” said Library Director Kristin Shelley.

The month has also been declared Library Appreciation Month in East Lansing after a resolution from the Michigan Library Association was approved at the Oct. 19 City Council meeting. The theme of this year’s Library Appreciation Month is “Keeping Our Communities Connected.” Michigan Library Association Director Deborah Mikula said, “What we want people to know is that libraries are accessible and they’re open and they’re free. They welcome everyone through their doors.”

For the East Lansing Public Library, the month is a celebration of the renewed ability to allow citizens to walk through library doors again, said Shelley. “It’s a really big thing that’s been exciting for all of us, because it’s been well over a year.”

“Keeping Our Communities Connected” alludes to the many ways community members can use the library. To kick off the month, Shelley said the library partnered with Sparty to film a video showing off the variety of resources available. “The video is of Sparty and I holding an extension ladder because we have tools you can check out. We wanted to celebrate that libraries are so much more than books.”

Along with tools, Chromebooks, and even musical instruments, the library goes mobile with a “Library On the Go” van that visits spots around the community, Shelley said. The van frequents the East Lansing farmer’s market, apartment complexes and retirement communities. Over the summer, the mobile library could be found at parks and summer schools across East Lansing.

“Libraries have been great equalizers. We try to be inclusive and equitable in our practices so we have something for everybody,” said Shelley. Any resident, business owner, city worker, or student in East Lansing is eligible to obtain a card free of charge in order to gain access to all the resources at the ELPL. Further, the library got rid of overdue fees as of July 2020. “Libraries across the country – and Michigan is no exception – have gotten rid of late fines so that people have more access to our resources and they’re not stopped because they have overdue items.”

“Libraries are about information sharing. That’s one of the biggest messages residents in Michigan should understand. They’re community centers,” said Mikula.

My name is Kayla Nelsen and I am a second-year student at Michigan State University double majoring in journalism and environmental studies and sustainability. I write for the Great Lakes Echo in the Knight Center for Environmental Journalism (http://greatlakesecho.org/).