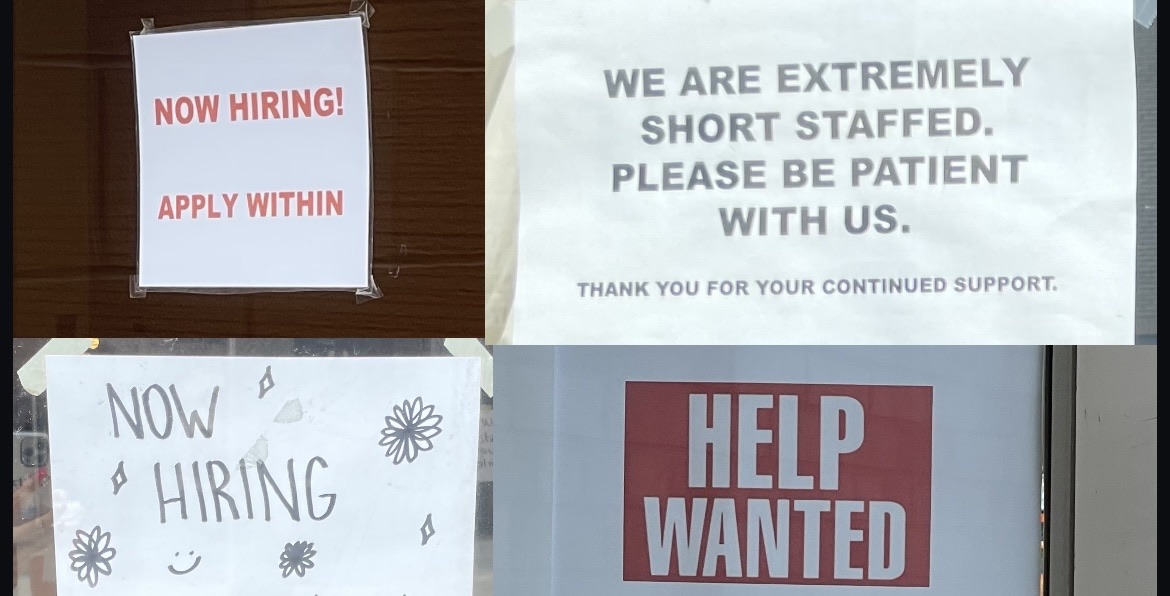 Businesses from all around downtown East Lansing have signed up allowing those passing by to know they are hiring. Even in one case, asking customers to have patience as they are understaffed while attempting to hire new staff.

When walking around downtown East Lansing, you will run into help wanted signs out front of many of the businesses and restaurants. Starting fall 2021, Michigan State University is set to resume in-person classes for the first time since March, 2020. Will students returning to campus coincide with an increase in the labor workforce?

Peter Dewan, who served on the Downtown Development Authority board for 11 years until resigning this July, said that the DDA was particularly concerned in helping downtown businesses navigate the negative effects of lacking students on campus during the pandemic.

“So many businesses rely on the students,” said Dewan. “They are essentially the lifeblood of their operations.”

For the past 18 months, most MSU students have been learning virtually.  With classes set to resume at the end of this August, there has been a feeling of hope that the city may be able to regain its workforce. A workforce that pre-COVID-19 had been very reliant on students to provide as customers and employees.

Ron Bacon, city council member of East Lansing, said that the lack of students has created a dramatic shortage of labor for East Lansing businesses.

“We have a hospitality and service sector in our area,” said Bacon. “That sector has been hit really hard as far as the labor shortage goes. Our community has been getting creative on how to staff up and prepare for students.”

During the COVID-19 pandemic, employers have proven more in need of workers now than ever before. According to the U.S. Bureau of Labor Statistics, on the last business day of June 2021, the job openings level increased to a series high of 10.1 million in the U.S.

According to the Michigan Bureau of Labour Market Information and Strategic Initiatives, Ingham County’s unemployment rate is 5.9%. This places East Lansing in a county with a higher rate of unemployment than the state average.

Jessy Gregg, mayor of East Lansing and owner of Seams Fabric, said that in her conversations with business owners many believe unemployment benefits are to blame.

“It really does seem that citizens are pretty reluctant to go back to high volume customer service jobs,” said Gregg. “I did have an experience myself and an employee that was doing very well on unemployment and opted to stay on unemployment rather than return, so I do know that that’s a factor.”

Gregg also said many customer service jobs, there is a level of concern that the workforce has with exposing themselves to large amounts of people.

“Personally, I think that having an environment where you are working with so many members of the public causes nerves and combined with a low-hourly wage leads to workers being reluctant to return,” said Gregg. “East Lansing always has a labor slump in the summer because our college students go home and they are the ones doing a lot of those mid-wage service jobs.”

According to the U.S. Census Bureau, East Lansing has experienced a -1.7% drop in population from 2010-2020. Due to MSU’s recommendation to return home in March 2020, it is also included that this drop in population was affected by students moving home and being counted at their family residence.

Dewan said that the East Lansing DDA has tried to work with businesses in helping them through the labor shortage.

“A lot of businesses are challenged with hiring employees and finding people that are seeking employment,” said Dewan. “This is not something only East Lansing is experiencing, it is all across the country.”

President Joe Biden spoke on July 21, regarding the labor shortage during a CNN town hall meeting in Cincinnati. When faced with the question from a local restaurant owner regarding what the administration planned to do regarding incentives to get people back out there to work, the president said

Dewan said he believes that the East Lansing labor shortage is due to a number of things all happening at once.

“We have the pandemic,” he said. “We have different types of regulation that are being imposed, the universities’ decisions with their students all have a corresponding impact on the businesses. I think it is a multitude of factors that are all contributing to the challenges that are impacting small businesses in the downtown.”

Nationally, some citizens believe that the labor shortage is largely due to the federal stimulus program. Kentucky Sen. Mitch McConnell is among those that have spoken out against the unemployment benefits.

“What I hear from business people, hospitals, educators, everybody across the state all week is, regretfully, it’s actually more lucrative for many Kentuckians and Americans to not work than work,” said McConnell. “So we have a workforce shortage, and we have rising inflation, both directly related to this recent bill that just passed.”

Haroun Noor, a bartender for Harper’s Restaurant and Brewpub in downtown East Lansing, said that he agrees that the unemployment benefits have created an issue within the community.

“I see the effects of the stimulus checks affecting students around me to this day,” said Noor. “My classmates are too lazy to get back to work because for over a year they were making more doing little to nothing. I do see why the benefits were needed at certain points, but there will always be those that abuse the system.”

He said he believes students returning in the fall will be beneficial to himself and those that choose to work.

“I am excited for students to return,” said Noor. “With the vaccine, I am hopeful that things will stay safe and that I will be able to profit from my choice to work.”

According to the Michigan Restaurant and Lodging Association, nine out of 10 restaurants and nearly every hotel are operating with inadequate staffing. MRLA President & CEO Justin Winslow said

“While Michiganians have proven eager to return to a life that includes ample travel and restaurant dining, it has become clear that the nature and speed of this return have placed enormous pressure on the industry and its supply chain,” said Winslow. “Restaurant and hotel operators are trying to meet consumer demand that exceeds 2019 with 100,000 fewer workers and skyrocketing labor and commodity prices. Workers are exhausted and profit margins are thin for many despite the resurgent demand.

While many East Lansing businesses have reported similar struggles to what was brought to light by the MRLA, Joe Bell, Owner of The Peanut Barrel, said that he is having better luck than most within the industry in regard to keeping a full staff.

“We took to paying our staff more all across the board,” said Bell. “That has helped us keep our staff in place and is attracting new people to our business. We have been very fortunate that the government has fronted our funding in the form of grants and loans which has helped us as well.”

Bell said that while business is good now, the Delta variant of COVID-19 has caused some concern for the fall.

“Over the past year we have been closed, opened anywhere from 50% to 75% capacity,” said Bell. “Now we are totally open but worried about the variant and what is going to happen with that. Consistency is a big deal in this business, so we hope that we can continue to keep things consistent in the fall.”

“I think students coming back this fall will bring a lot more business to downtown East Lansing,” said Fitch. “I think bars, such as FieldHouse, will get busier and make more money. Especially with football being back, I think there will be way more people going out and spending money at bars and restaurants if things are to remain open.”