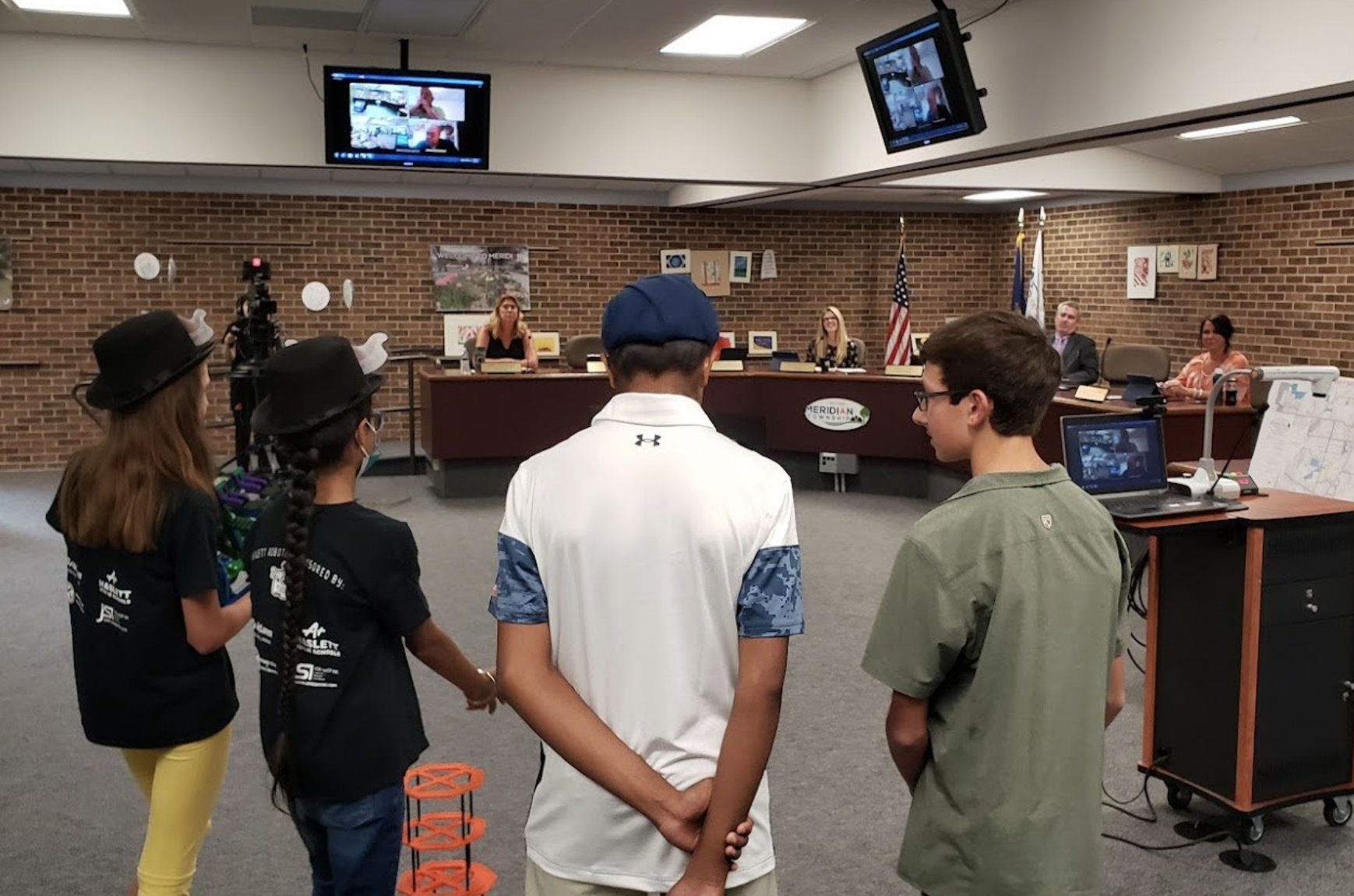 The zesty moustaches pictured presenting to the Meridian Township their robotics that brought them success during state and world championships.

The successes of four Haslett Robotics Club students lead them to a championship that meant more than just a trophy.

“There’s been a lot of hard work that’s gone into this past year,” said Ian, who is a member of the high school team. “It is nice to be recognized for something that we are all so proud of.”

On July 20, Haslett Robotics Club members were presented with the Certificate of Achievement. Phil Deschaine, Treasurer of the Meridian Township Board, awarded the students.

“Congratulations to the Haslett Robotics Club on your success persevering through the Covid pandemic and competing at the state and world tournament level,” said Deschaine.

The teams, both named the Zesty Mustaches, were presented by Meridian Township with the Certificate of Achievement for their participation in world championships. The championships took place May 17-29, 2021, completely online were over 1,400 teams from around the world competed. The students, two in middle school and two in high school said they had gained a lot of experience from this opportunity.

“Robotics teaches me all the skills I need in life,” said Aikem, a member of the middle school team. “I want to go into biomedical engineering, and skills like teamwork and good sportsmanship go along with that.”

Steve Sneed, the president of the Haslett Robotics Club, spoke to the board about the history of the club. He was then followed by four students, who presented the board with the robotics projects they were involved with over the past year. Sneed said the club uses robotics as a way to get kids excited about the STEM field.

“We are a club of kids and coaches who are interested in STEM through the use of robotics,” said Sneed. “We use robotics as a hook to get students excited about not only the STEM field but also life and technical skills.”

Ian said a club is a place where people can collaborate and share their ideas to drive innovation.

“It is such a big community of all these teams from across the world,” said Ian. “We all have the common goal of doing excellent things and challenging ourselves.”

The Haslett Robotics Club was founded in 2008 as a LEGO first league team. Nik Buchholz, a member of the first team in 2008 and through all of the high school recalls his time on this team with positive regard.

“It all started with a flyer they handed out in class,” said Buchholz. “The club set me on the path I am today, graduating last year from MSU with a degree in mechanical engineering and now studying for my master’s degree in robotics engineering.”

Buchholz is just one of many success stories from students who were active in the Haslett Robotics Club. Sartaj, a member of the high school team, said the club is where he found people with common interests.

“I decided to give it a try about three years ago when I heard some of my friends were joining,” said Sartaj. “I am now interested in computer science and the club has taught me a lot about programming.”

Robin Celeski. who is currently working with Sneed to take over the role of president this upcoming season, said that over the years passion from parents and students for the program remained constant.

“The core values have stayed the same through the years,” said Celeski. “Being able to problem solve, work in a team setting, and being proud of their accomplishments is something we want the kids to walk away with for years to come.”

Ilaria, a member of the middle school team, said that she has gained patience through the challenges of the competition.

“Being a part of the club is a community,” said Ilaria. “It is a family that you can rely on.”

Sneed, who has been a part of the program since 2009, said that it is one of the most rewarding things he has been involved in. He said he hopes to continue bringing more women into the community of STEM.

“There still isn’t a good balance between men and women in STEM,” said Sneed. “Most of our coaches are female and we believe having so many women involved encourages young women to feel comfortable and confident in their abilities.”

With the success of this past year at the state and world level, the club is looking to expand. Celeski said she would like others to experience how worthwhile watching the kids succeed is.

“To see the kid’s reactions to their success is deeply rewarding,” said Celeski. “In the future, I hope to continue improving the already fantastic program.” The club has reached capacity and is now looking for funding and volunteers to expand its program. Those interested in joining or volunteering for the Haslett Robotics Club, visit its website at https://haslettrobotics.com/.