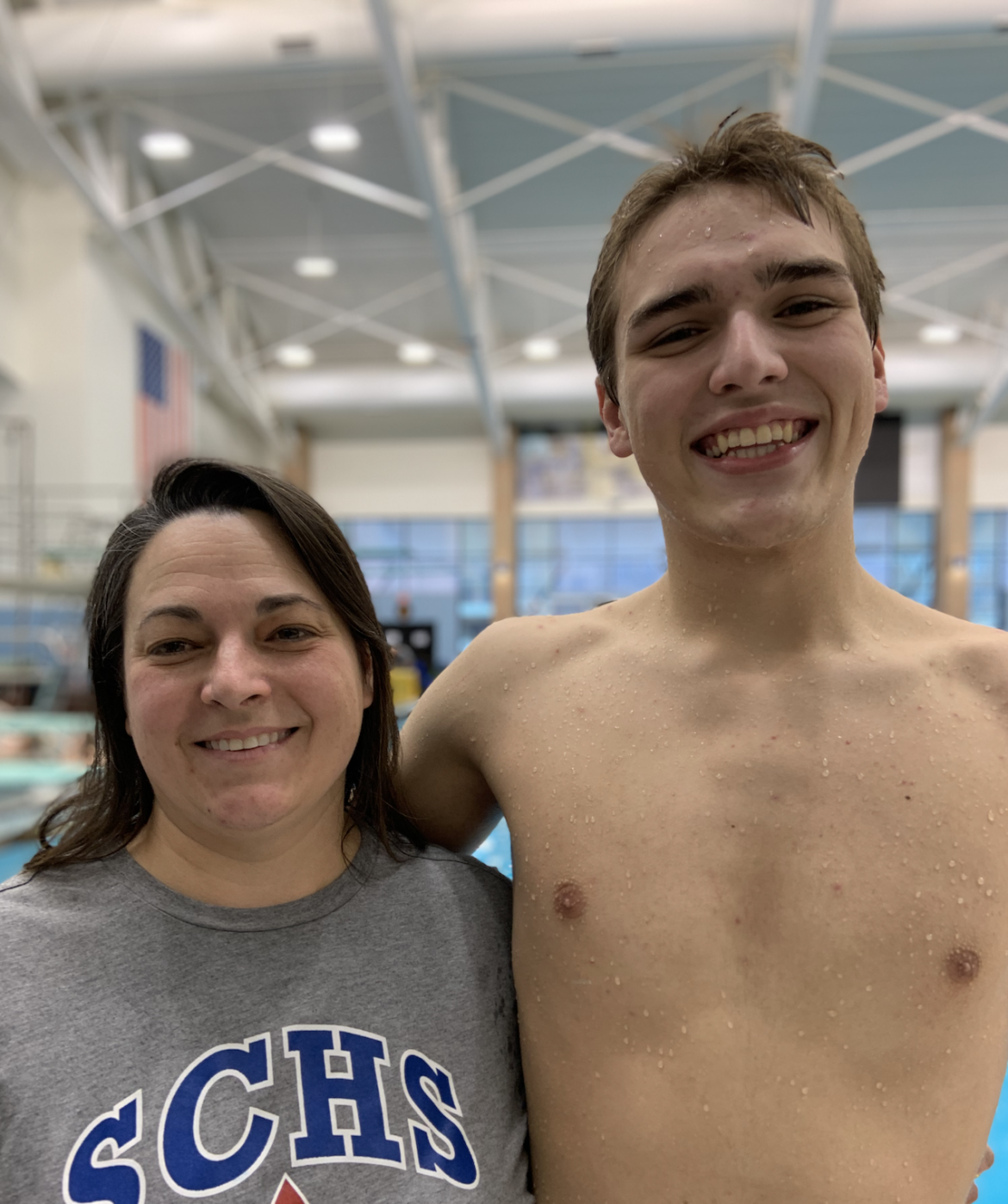 Sue Likins (left) alongside her son, Max Likins (right), who is a member of the boys varsity swim team at St. Clair High School.

ST. CLAIR, Mich. – Spencer Hack’s brain went into autopilot as he swam the 100-meter breaststroke on March 13 in the Blue Division meet. When he surfaced at the edge of the pool, he looked up at his time, 1:03.39. He had beaten the St. Clair High School record and qualified for states for that event.

His teammates started freaking out and jumping around with excitement and Hack joined in on that excitement from the pool, splashing and yelling. He had been working toward this goal for 10 years, and now the high school senior was heading to the state tournament – led by his coach, Sue Likins.

Likins, in her third year coaching at St. Clair High School, coached the girls and boys varsity swim teams this past season and came into the school every day at 4:30 a.m. for practices.  She led the boys team to an undefeated season, and six swimmers from the boys team qualified for states on March 26 and 27, according to the Michigan High School Athletic Association.

“I was very humbled and appreciative,” Likins said. “But, you know, it’s the kids. They’re the ones who were doing all the hard work, and they make me look good.”

The Macomb Area Conference is a sports league made up of 38 high schools from southeastern Michigan. Placed into seven divisions based on prior years’ placement in competitions, the St. Clair Saints faced teams that were in their skill level.

At these competitions, Likins encouraged her swimmers through teamwork and an interesting incentive. Every meet, Likins brings colored bands that will be given to the swimmers for different accomplishments.

“We have a red band for the hardest worker, a blue band for MVP of the meet, and then we give out a white band at the end of the meet for the most time dropped,” Likins said. “I would encourage other coaches to do small things like that, because not everybody wins an award every time.”

The St. Clair boys swim team functions differently from other varsity sports at the high school. Instead of holding tryouts, anyone can join the team. But to receive their varsity letter, Linkins said, members have to swim at a specific time standard.

Last year, the boys swim season was shut down a day before they were able to attend the state competition, Likins said. This year, the team took proper precautions in order to keep everyone safe and still practice.

“It did give us a little bit more rest than we normally would have gotten,” Hack said.

“She’s incredibly organized and has a very high work ethic,” Rutledge said. “She is a great role model for our kids because she’s more than willing to get up in the morning and get them here and do everything it takes for them to be successful.”

The St. Clair High School boys varsity swim team was able to have a great season in uncertain times. From counting in Roman numerals during warm-up stretches to making fun of their quirks while swimming, the boys bonded and had fun, while still working hard to achieve their goals and break records with Likins on the side of the pool cheering them on.

“She makes it clear, that it’s more than just a sport to her, it’s a family,” Hack said.