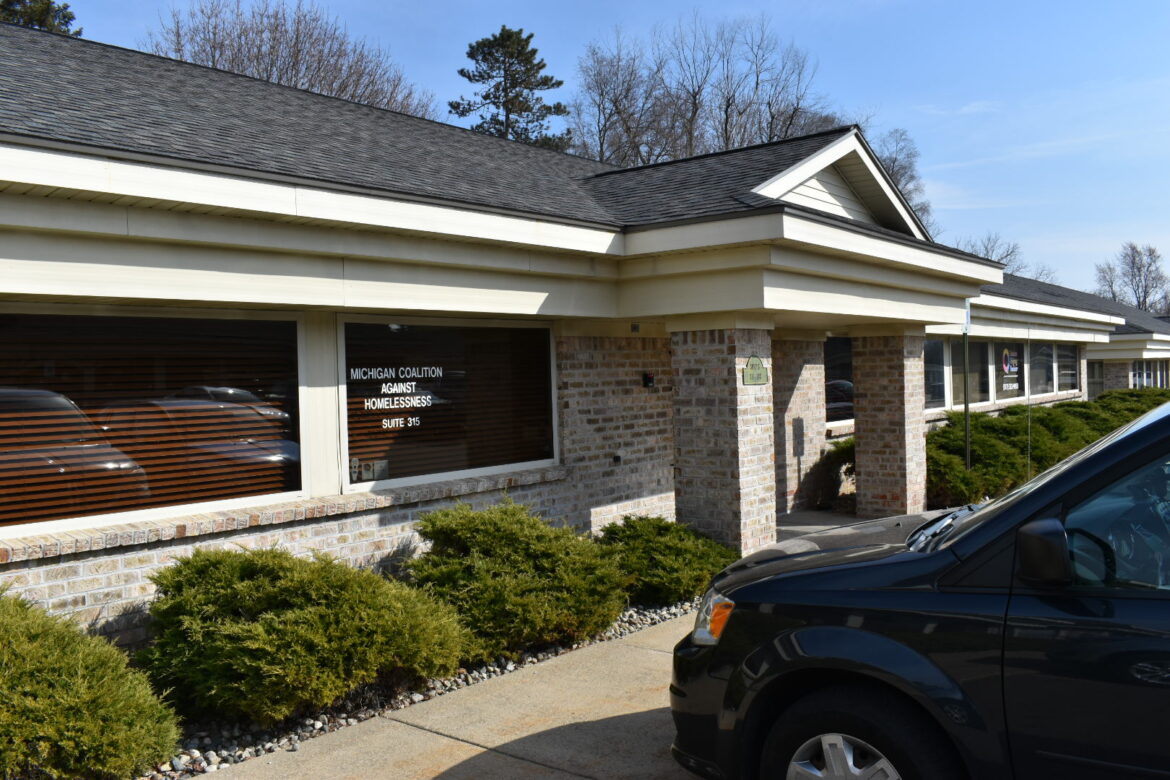 Entrance to the Michigan Coalition Against Homelessness office off Old U.S. 27 in Lansing.

LANSING –  With more vaccinations being administered in Michigan and a tentative end to the COVID-19 pandemic in sight, homeless shelters and advocacy groups are preparing for a different type of outbreak.

Since September 2020, a federal moratorium on evictions has been in place, preventing those who have lost jobs because of the pandemic from being evicted for failure to pay rent.

“In our early looks at numbers for the year of 2020, we see our homeless numbers are down in the state of Michigan,” Michigan Coalition Against Homelessness Project Director Gerald Leslie said. “The alternate side of that is making sure that when those moratoriums are lifted that the resources are in place to address what may be a floodgate.”

The federal moratorium on evictions was set to expire Wednesday, March 31, but, two days before the deadline was set to expire, the CDC extended the moratorium until June 30. The pandemic has left hundreds of thousands financially vulnerable, as the Michigan unemployment rate, while improving, currently sits at 5.2%, about 2 percentage points higher than it was in February of last year, according to the U.S. Bureau of Labor Statistics.

Even if current tenants qualify for eviction protection, when the moratorium ends they will be liable for the entirety of their missed rent, something the recently signed American Rescue Plan addressed as it allocated $20 billion to help tenants and landlords cover missed rent and utility payments.

Currently Michigan has had over 700,000 total COVID-19 cases since March 2020, but increasing vaccination rates are hoped to counter a recent spike in cases likely due to loosening restrictions.

Homeless shelters such as the City Rescue Mission of Lansing served on the front lines of the pandemic, offering coronavirus tests in addition to a place homeless people could stay during the shelter-in-place orders which lasted from March to June.

“We had staff and guests who were tested and came back positive and some of them never even showed any symptoms,” said Laura Grimwood, senior director of communications for the City Rescue Mission of Lansing. “If they hadn’t been in the shelter and been living outside in an encampment, they would not have known that they were carrying the disease and most likely would have been spreading it.”

According to a 2019 report released by the Michigan Coalition Against Homelessness, Michigan has a homeless population of over 61,000, which is roughly the total population of Holt, Okemos and Haslett combined.

Homelessness also disproportionately affects Black people, who represent 52% of the homeless population despite making up only 14% of the total population of Michigan, according to the MCAH report.

Seniors and people with disabilities are also highly represented in Michigan’s homeless population, as 44% of homeless people also suffer from one or more mental or physical disabilities, according to the report.

A keynote throughout the report from the MCAH was the financial challenges faced by the homeless. The average monthly income for a homeless person in 2019 was $662, which would roughly equal a $3.85 per hour wage. The fair market rent cost in Ingham county in 2019 was $730 a month for a one-bedroom apartment, according to that same report.

The current eviction moratorium places the onus on evictees to seek protection from evictions, Capital Area Housing Project Executive Director Rawley Van Fossen said. This requires those vulnerable to evictions to be aware of the moratorium and have access to the resources necessary to submit a halt of eviction declaration.

The moratorium the state needs in order to combat homelessness is a blanket moratorium. Landlords need as much help as tenants during a pandemic that has affected every level of our society, so it’s not enough to just halt evictions, we need to support landlords who aren’t receiving rent as well, Van Fossen said.

“If you are without a vaccine, if you are still facing unemployment challenges, until the job market resumes to where it was pre-covid by no means should we be trying to evict somebody from their home because they had a hardship due to covid,” Van Fossen said. “Whose fault is that? It’s covid’s fault.”

Jake Christie grew up 20 minutes from Michigan State University where he majors in journalism. Jake worked nights to put himself through college, earning a degree in journalism from Lansing Community College before continuing his education at MSU. His interests in journalism revolve around long-form investigative reporting and helping marginalized communities to speak for themselves.