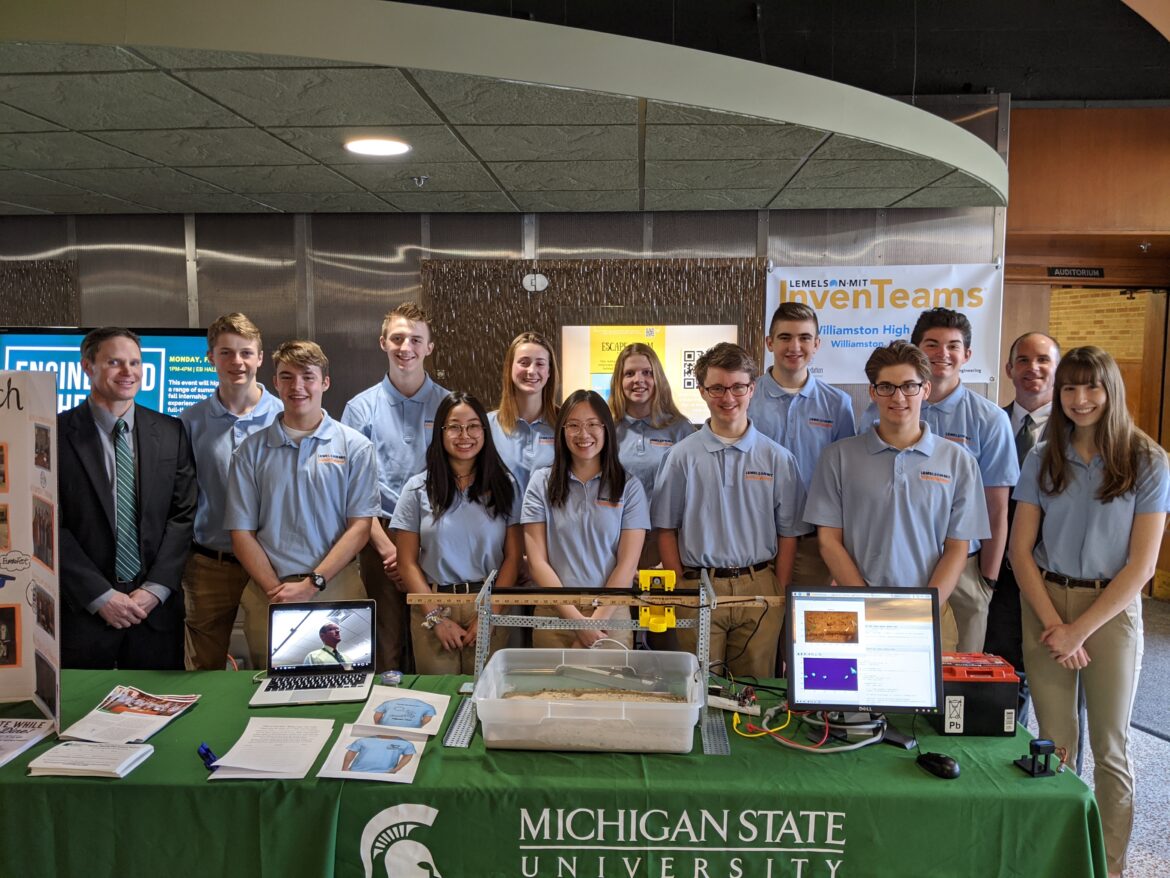 The program provides an opportunity for students from high schools throughout the country to learn from professionals, teachers and graduate students who invent or do research to invent.

Invention Education Officer for the program, Leigh Estabrooks, said it is a two-step process to be accepted to Eurekafest and to receive the $10,000 grant to create an innovation to solve real-world problems. The first step is the teacher’s application, and if they are selected they become only 25 to 35 teams to receive an Excite award. The second step, which occurs a few months after the first step, is the final grant application students must complete.

According to the Williamston High School InvenTeam website, the final application includes several components such as research into the topic, similar ideas already on the market, a timeline of their plan, and how much money they need.

In the 2019-2020 school year, Williamston High School InvenTeam was one of only 14 teams selected for Eurekafest.

Williamston High School is one of four teams in the United States to be selected three times for the program. The first invention from 2012, a buoy that read and analyzed riptides, went to a White House science fair. And the second invention from 2016, a school locker that accommodates special needs students, received a U.S. patent.

The team consisted of 14 members, nine of whom were seniors, the rest juniors. They were then broken up into groups based on interest and tasks that needed to be completed. According to their website, this included groupings such as engineering, social media, public relations, fundraising, and so on. Joe Rasmus and Steve Kersten, two teachers from Williamston High School, advised the team.

InvenTeam advisor for Williamston High School, Rasmus, said the invention was similar to a Roomba vacuum cleaner for the beach.

“It would identify plastic pieces that are on the beach and there’s a vacuum that’s flipped on when it identifies the plastic pieces,” said Rasmus, although he added it is more for surface level cleaning and if the litter is buried, it might not identify it. “It then sucks up the piece. The identification is really just based on bright colors.”

How Lemelson-MIT Eurekafest and InvenTeams continued amid pandemic

In March of 2020, when schools shut down because of COVID-19, the team was forced to change strategies to ensure the project was ready by June. With social distancing guidelines, the team was unable to meet up and was unsure if they were ever going to be able to work all together again. The last day of school the team had to split up tasks and figure out how to get everything done on time and in their own homes.

Rasmus said, “We spent the day after school kind of collecting the materials and having them take things home to work on, but doing it in isolation with just bits and pieces of materials isn’t nearly as productive as having everything in a full group.”

Their team, like many of the other invention teams involved in the program, had to find ways to meet up safely throughout the semester to pass on materials, project parts and information. Not only were the teams affected, but the actual event itself had to alter its plans.

Estabrooks said there were some benefits to a virtual event such as allowing more guests, creating a longer event, and allowing more special guests to attend and speak in front of the students.

Williamston High School InvenTeam members have someone to look up to from the nearby University, Michigan State Assistant Professor of Computer Science and Engineering, Josh Siegel. Siegel was the founder of CarKnow, a company he worked on as a graduate student, that involved the technology that won him the graduate student prize for Lemelson-MIT in 2015.

Siegel said, “CarKnow was an open source, connected car platform. You plug a device into your vehicle and stream data to the cloud.”

The information that is sent to the cloud is very helpful for drivers and includes information such as when to change tires or air filters, and can even unlock doors remotely. This technology was one of the ideas he submitted for the 2015 Lemelson-MIT prize for the “Drive It” category, and which he won that category with.

With a strong passion for teaching and finding ways to better the world, Siegel can influence future innovators and current students in the STEM field.

On what motivates and inspires him, Siegel said “The idea that I can find something cool, maybe at the intersection of something existing, maybe a completely new discipline, create, solve a real problem, and then move on to the next thing.”

For information on the Lemelson-MIT program: https://lemelson.mit.edu