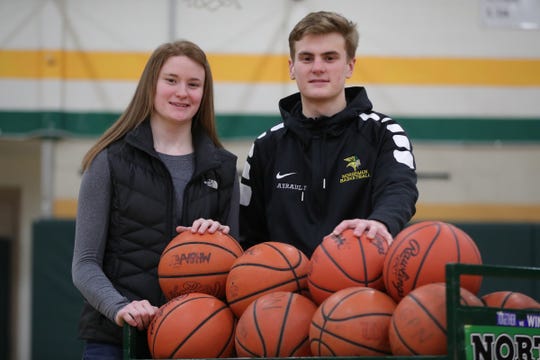 Joey and Julia Ayrault grew up playing basketball together. From recreation leagues at the Neighborhood Club to playing alongside each other at Michigan State, Joey said he’s built stronger relationships with other players and his sister.

“I think a lot of younger people, especially, sort of suffer in silence because they don’t know who to talk to, or how to handle what they’re feeling, and that tends to have a negative impact on their athletic performance too,” Joey said. “If they’re struggling mentally, and can’t give 100 percent physically, then they’re not 100 percent mentally.”

While Joey’s twin sister Julia went off to play women’s basketball at Michigan State, Joey said after being hospitalized for his depression and anxiety, he needed a break from basketball to focus on his health.

Amid the Covid-19 pandemic, there has been an increase in mental health cases among student-athletes at the collegiate level. In a 2019 NCAA study of 37,000 student-athletes, the survey found that the majority of student athletes reported high rates of mental distress, over a third reported sleeping difficulties and 1 in 12 athletes reported extreme depression and anxiety on a daily basis.

In efforts to improve his mental health and surround himself with the sport and team-like atmosphere he grew up with, Joey joined the women’s basketball practice team. From traveling to practicing, Joey said the basketball program has helped with his mental health journey, and now he wants to help other athletes, too.

“When the kids were little, we would go in the backyard, and we would shoot,” Kim said. “I’d say ‘Andy, do you want to do dishes? Or do you want to give baths?’ So we’d shoot baskets to determine who was gonna do what,” Kim said. “It’s always been a part of our relationship, and we tried to instill that in our kids. I mean, there’s nothing better than being part of a team.”

After coping with mental health issues for a year, Kim said Joey used his experience on the practice team to encourage others.

“Joey wanted to speak up and speak about it. He just kept saying, ‘I want to help other kids, I know there’s kids struggling, especially now with COVID,” she said. “He constantly was like, ‘I just want to help people and know that you can get through it.”

Friend and team member Connor Porrell agrees that sports take a huge toll on athletes’ mental health. From schoolwork to competing every week, he said athletes are often desensitized and are expected to toughen up when under pressure.

“(Athletes) are people too, and they struggle with the same things everybody else does, but it’s just not talked about,” Porrell said.