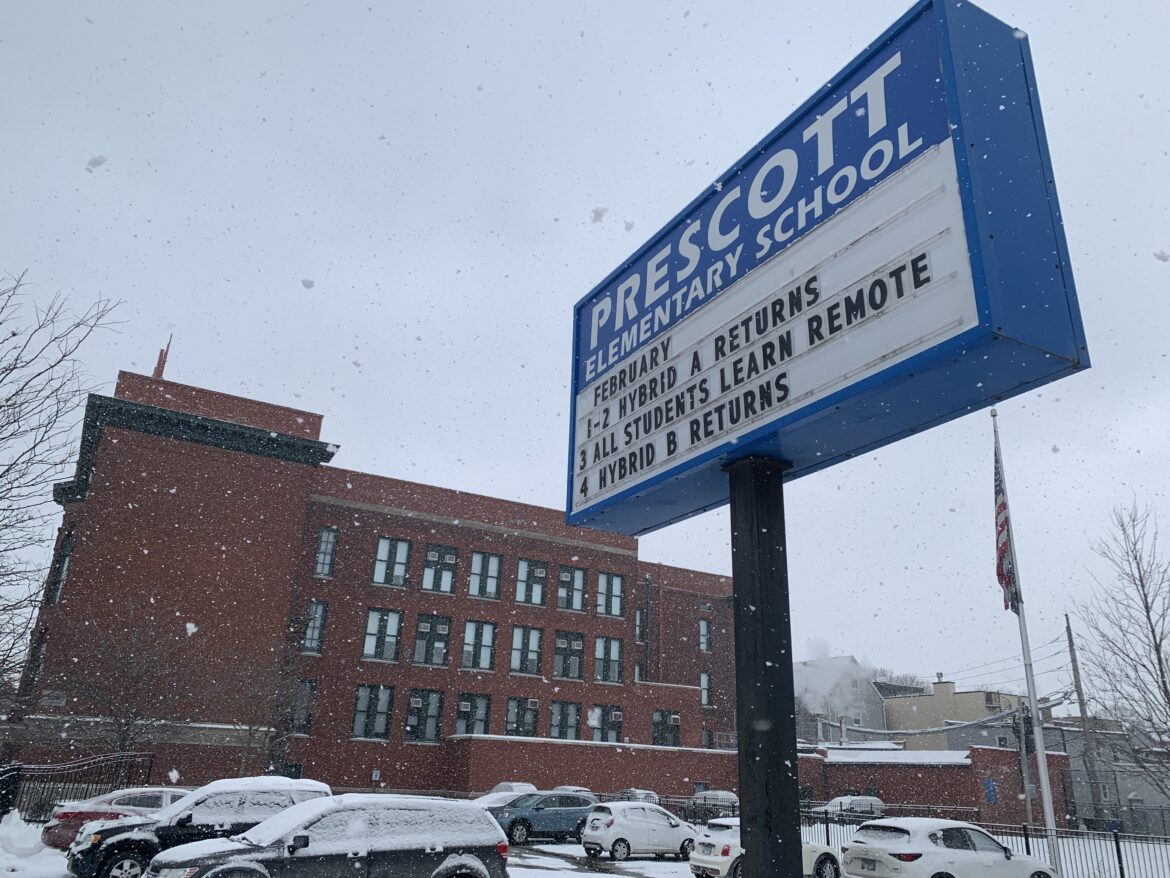 Prescott Elementary School, originally set to open last week, is now planning on a March 1 return for its kindergarten through fifth-grade students.

CHICAGO – Chicago Public Schools is finally heading back to the classroom… sort of.

After months of intense negotiations between Chicago Public Schools and the Chicago Teachers Union, the CTU voted Feb. 11 to accept the district’s re-opening plan to slowly phase students back into schools amid the COVID-19 pandemic. Although the resolution passed with 68% approval, many, including the union’s president, voted to pass it only because they thought it was the best deal they were going to get.

“Let me be clear. This plan is not what any of us deserve. Not us. Not our students. Not their families,” said the president of the CTU Jesse Sharkey in an email to his members on Tuesday. “The fact that CPS could not delay reopening a few short weeks to ramp up vaccinations and preparations in schools is a disgrace. This agreement represents where we should have started months ago, not where this has landed. That is a stain on the record of their administration.” The vast majority of Chicago teachers seemed to agree with Sharkey’s sentiment, as a vote of no confidence in Mayor Lori Lightfoot and the leadership of CPS also passed with 90% approval.

Finding common ground between the two sides has been extremely difficult. Lightfoot and CPS CEO Janice Jackson believe their plan is comprehensive enough to effectively curb the spread of the virus, while the union has struggled to get the district to meet them where they are. Some of the union’s biggest demands include vaccinations for teachers and proper ventilation and social distancing measures. Lightfoot is promising vaccinations in time, but is urging that hybrid learning can begin while they roll out.

In a tweet early Wednesday morning, Lightfoot wrote, “The vast majority of CPS families have been separated from their schools for nearly a year, and the ratification of our agreement ensures families have options to choose in-person learning and make a plan that is best for them.”

In the agreed-upon deal, pre-kindergarten and cluster program students are set to return Feb. 11, while kindergarten through fifth grade will enter hybrid learning on March 1, followed by the sixth, seventh, eighth graders on March 8. All teachers with schools opening are required to return physically one week before their opening date. Hybrid learning is optional for all students, and currently, only 20% of them have opted into the program. Even with the smaller number of students being in-person, social distancing requirements make class sizes tiny and spread teachers thin.

As long as it took to come to an agreement on this deal, a very large chunk of CPS’s population has noticeably been left out: high schoolers. At the very end of the statement, it was noted that secondary education would be handled by a separate task force at a later date.

The logic behind the district prioritizing younger students comes from their belief that teenagers are better equipped to handle virtual learning while younger students need that physical interaction during their primary developmental stages. While this may be true, recent research from youth development organization 4-H found that 7 in 10 teens are struggling with mental health and 64% believe the pandemic will leave a lasting impact on their life. With no light at the end of the tunnel, these next few months of uncertainty could be devastating.

“It’s harder for them [teenagers],” said Tory Waterman, a longtime French teacher at Jones College Prep. “There’s more of everything, and they are tired all the time because they stay up late.”

Private schools across the city have been open since August, including DePaul College Prep, a Catholic high school on the north side of the city. Matthew Baum, a math teacher and the school’s track coach, has been teaching hybrid classes from the school’s campus since it opened six months ago.

“What has continued to give me more and more confidence to go to school every day is that all of the cases of students catching the virus have come from outside of school: bars and restaurants, social gatherings,” Baum said. “t’s not being spread when we’re together in the classroom.”

According to the Illinois Department of Public Health, Chicago reported 2,082 new cases and 58,189 vaccine administrations on Feb. 9, the day the CTU cast their votes. Since Chicago’s peak of over 15,415 new cases in a single day on Nov. 13, it has steadily decreased over time. The positivity rate for the virus in Chicago is now at its lowest point since last October, which has served as one of the major talking points for those advocating a return to the classroom.

Getting students to stop talking during class and pay attention before the pandemic was sometimes an impossible challenge for teachers, but getting their students to follow all the coronavirus protocols is another level of difficulty.

Baum taught within CPS at Goudy Public School for a few months before moving on to DePaul, where he has been for the past four years.

“Teachers have to stand up for their rights and public education is a fantastic thing that is necessary for our world to function, but it [being at CPS] showed me all of the bureaucracy behind it which is why I am now at DePaul Prep,” said Baum.

At Jones College Prep, a selective enrollment high school in the Loop, about 80% of teachers voted yes on the mayor’s plan.

“If they were talking about the high schools having to go back, I don’t think it would have been approved. I would have been kind of disappointed in my colleagues,” said Waterman, who voted against the agreement. She also said that she would not feel safe going back to the classroom given the current protocols in place.

“They just don’t take good care of the teachers,” she said.

According to Waterman, photos have been posted on social media by teachers that show new air filtration devices sitting in classrooms uninstalled and still in packaging. CPS also gave three masks to each of the teachers in the city; however, all of the masks she received were fit for a child, rendering them useless to her.

The teachers aren’t only concerned about their own safety, but their students’ and families’ as well.

Enzo Basile, a freshman at Lincoln Park High School, still has yet to set foot in the corridors of his new school and cannot wait to get back to a normal educational environment.

“I miss screwing around with my friends and learning with them in class,” Basile said.

Basile also talked about the impact remote learning has had on his productivity. “We’re always sitting down. It makes me lazy,” he said.

Without being physically present, it can be difficult for teachers to establish connections with students get them to participate in class.

“I have 30 black squares,” Waterman said of her Zoom classes. “It’s hard trying to get everyone past that hurdle of not liking the way they look and sound on camera. People are going to have a hard time getting over social anxiety, which was already a problem before COVID too.”

CPS had initially attempted to bring back Pre-K and cluster programs in early January after winter break, but after a couple of weeks, the CTU voted to only work remotely until a deal was reached. This decision was a consequential one for those teachers, as the next morning, they found themselves locked out of their school accounts and unable to access their students. Their attendance was marked as absent without leave, which brought the union close to going on strike for the third time in the past decade, something Chicago teachers have gotten especially used to over that time.

Carter Frye is a sophomore journalism major with a sports minor at Michigan State University. He is passionate about basketball, baseball, football, and digging for the important stories in sports that are happening off-the-field. Carter was also an editor for his high school newspaper, the Blueprint, at Jones College Prep in Chicago, IL.