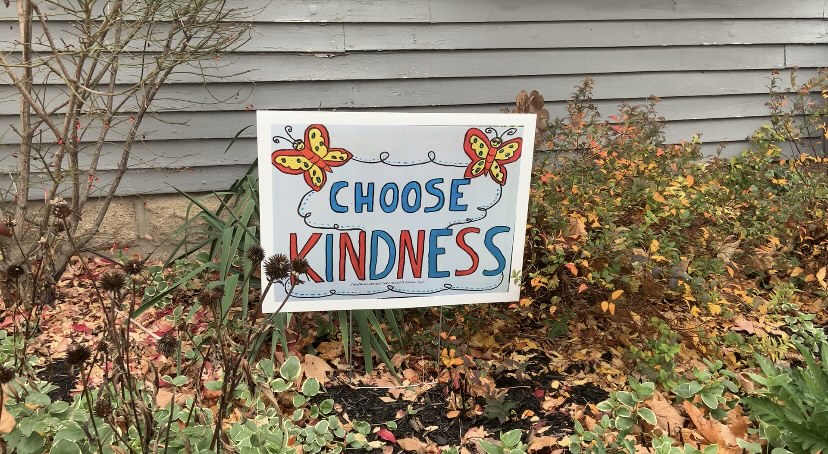 Joanne Ellena started painting lawn signs in March of this year. After her signs grew in popularity, she began distributing free journals about being kind.

Passing through any neighborhood during a presidential election year often means being greeted with a sea of political signs declaring allegiance to one candidate or another.

But Grand Ledge resident Joanne Ellena has been working to fill lawns with a different kind of sign to bring people together.

“Back in March of this year I was off work for COVID and I had just started seeing a lot of political signs in the neighborhood, so I decided to start painting my own signs,” said Ellena, who moved to Grand Ledge a year ago and works as a preschool teacher at Holbrook Early Childhood Center.

“I had four signs in my yard and I started having people make a lot of comments about the signs, especially the one that said ‘Choose Kindness.’”

Ellena said people began contacting her asking if she could make one for their home. She said she decided to use her stimulus money to order signs and distribute them to her friends and neighbors.

“I started with just a couple hundred signs and people just loved them,” Ellena said. “They would donate in my donation box outside and just through donations I was able to keep it going. So far, I’ve done 2,200 signs. They’re all over Michigan.”

Ellena said her signs have sparked conversations between neighbors in her community and she hopes people will continue to talk with one another.

“People don’t always realize that other people are kind, so by having a sign in their yard made people see that they are approachable,” Ellena said.

Neighbor Dan Putney said when he first saw the signs he thought they were marvelous.

“She hit the nail right on the head with the times we are in,” Putney said. “People see them and they want them. It’s their way of saying yes, this is the perfect way to join the community and to relieve a lot of the stress that everyone is going through right now.”

Putney said he’s sent ‘Choose Kindness’ signs to his friends and family in Arizona, Ohio, and California. He said some of them have contacted him requesting more signs for their neighbors.

Putney, a longtime Grand Ledge resident, said he believes these signs have already impacted the community.

“I believe I lived in the best of times because we didn’t have the modern kinds of communication that we have today,” Putney said. “There was more harmony in the neighborhood and I think now the harmony is coming back. I think Joanne and her signs have a lot to do with that.”

Marianne Cox, manager of Grand Ledge Ford Lincoln, said when she began seeing these signs in her neighborhood she was so happy she started giving them to her friends and people at the dealership.

“These signs have proven to me why I made Grand Ledge my home 18 years ago,” Cox said. “I just loved the message, especially in the world we are in right now. I think that everybody wants to be kind and good to each other, but I don’t think that people always know how to do that.”

Ellena said she wants her signs to encourage people to be present and have real conversations with one another.

Ellena has created a Facebook group for Choose Kindness, and it has over 1,100 members.

“The Facebook group is a great way to show where the signs are, but we also ask for people to use it to share kindness,” Ellena said. “My hope is that the page will continue to be used to spread stories of kindness.”

Sarah Peltz grew up in Farmington Hills, Michigan, and came to Michigan State University in 2018. During her time at Michigan State, she studied journalism and public relations. In addition to the Spartan Newsroom, her writing has appeared in HerCampus magazine.