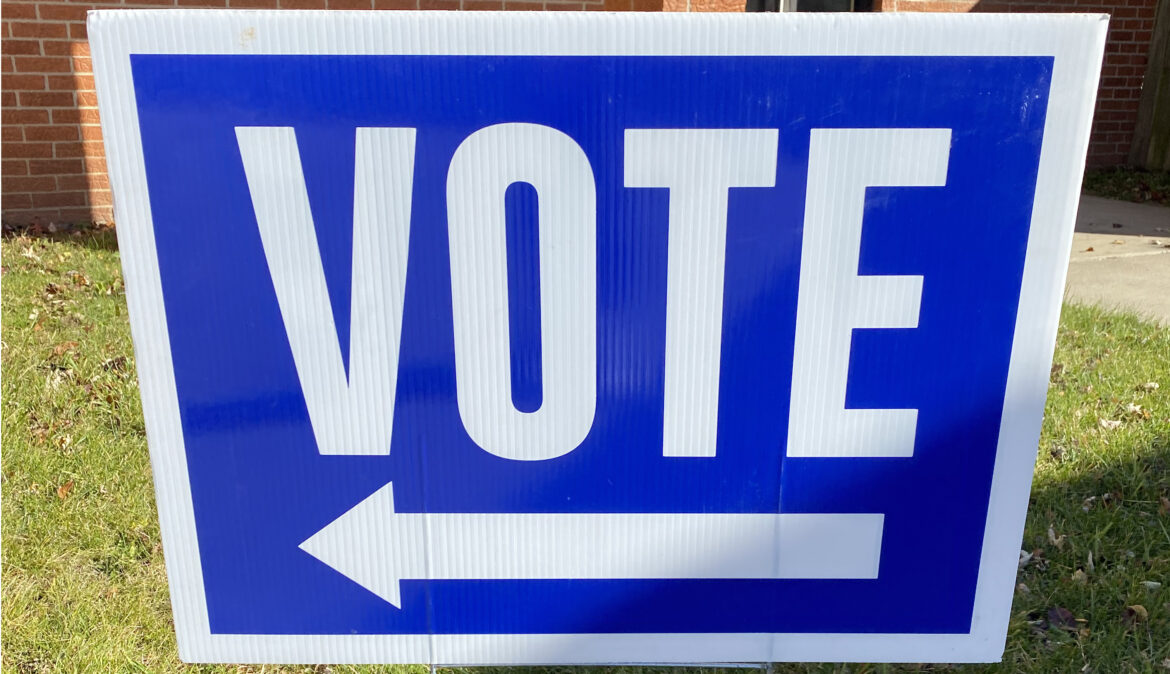 More than 3 million Michigan voters cast absentee ballots, according to the Secretary of State’s office, and 2 million people were expected to vote in person at the polls today. That could beat a turnout record of just over 5 million ballots cast in 2008.

“I felt like it was a good idea to come here and vote in person,” Kaitany said. “I wanted to see what it was like and, you know, make sure everyone’s able to vote safely.”

Virginia Warner went to the Martin Luther Chapel in East Lansing to cast her vote Tuesday. Warner said she wanted to be sure she could redo her ballot if the machine rejected it for any reason.

“If I don’t vote in person and I spoil my ballot they just throw it away,” Warner said. “That’s the main concern I have.”

Holt resident Rob Evans voted at about 11:45 a.m. at Hope Middle School in Delhi Township. Evans, a facility and maintenance managed at a local school, said he wanted to keep with his tradition of voting in person.

“I think it’s important to get out and express your opinion. We have the right to do that,” Evans said. “I don’t know, maybe I’m just old school and don’t trust the mail-in stuff at this point.”

Nancy Lewis, an ophthalmic technician from Midland, said that save for one lone person, everyone was wearing masks when she voted today and each voter was handed their own individual pen. She said this made her feel safe to vote in person.

“I wanted to make sure my vote counted, I wanted to put it in the bin myself,” Lewis said.

Jayla Knox, an 18-year-old Lansing Community College kinesiology student from Holt, said she didn’t have to wait in line to vote after casting her first ballot Tuesday. Knox voted at the Delhi Township clerk’s office at 12:45 p.m., wearing a red face mask and with “Black Lives Matter” written on her face.

“I felt really safe, there wasn’t many people in there at all,” Knox said. “So that made me feel a lot more comfortable and on top of that everyone was wearing masks and everyone was polite.”

Knox said it was important for her to vote.

“I really feel like there is a lot of human rights at stake in this election,” Knox said. “I really want to support my friends who identify with other things and support myself who identifies as a Black woman and to not vote for people who I feel are hateful towards any other race and any other religion and any other choice of person who they love.”

Frequent murmurs of having “never seen the wait this long” could be heard this morning from a line of about 50 people that was stretched out of the front door of the Geneva Township, near South Haven in southwest Michigan.

The polls included hand-sanitizing stations, socially distanced line markings indoors, and pens and markers that were being periodically disinfected.

“Everything was fine,” said Cosseur, who arrived at the township hall to vote about 10:15 a.m. “I’ve been here around 30 minutes.”

Michigan is expected to play a key role in the race for president, and the state’s hotly contested U.S. Senate race is being closely watched as Democrats and Republicans battle for control of Congress. Voters also are deciding a variety of other state and local races.

Cosseur says he normally votes on issues about “life, freedom and the Constitution.”

“I think it’s always important to vote in an election,” Cosseur said. “But this one seems more volatile than the other elections.”

On the other side of the state in southern Oakland County, Gloria Davis, a 56-year-old Oak Park resident, said she’s been voting for 37 years and will continue to vote until her, “dying days.” Davis was at the polls around 10:30 a.m. with her grandson, who isn’t old enough to vote yet.

“I believe that everyone who is eligible and able to vote need to vote,” Davis said. “We need to create a change for us and our younger generations and that’s why I’m here with my grandson, to show him while he’s young why it’s important to vote.”

The line stretched out the door at Dixie Baptist Church, where Katelyn Rusnell, 18, voted this morning in Davisburg, in northwest Oakland County. It was Rusnell’s first time voting.

“My experience was good overall, I waited in line for 20 minutes this morning but I heard while waiting some people had to stand in line for hours,” said Rusnell, who wore a pink mask to vote.

She said not everyone was wearing a mask, but it was important for her to vote for president.

“I am now a part of that decision that will be made for our future,” she said.

“Voting is important, because if you do not vote you shouldn’t be able to argue about the person in office,” Maloney said. “You should make sure your opinion matters.”

Grand Ledge resident Molly Woods, 35, said she left her house about 6:30 a.m. to cast her ballot at the Sawdon Administration Building.

“When I arrived at 6:45 there was a line of people at the door probably around 30 people,” Woods said. “I had my ballot in hand at 7:25, but I didn’t feel I was waiting very long because it was so early.”

She said volunteers at the polling location were “cheerful and helpful” and that voters waiting in lines for the polls to open “were just chatting politely about things nonpolitical.”

Yani Rivera, a 20-year-old Michigan State University human biology student, voted this afternoon at IM West in her first presidential election. Rivera described her experience as efficient and said everyone wore masks and voting booths were cleaned after every voter.

“It’s my first presidential election and honestly, I was very curious to see how it worked,” Rivera said. “More importantly, I was very interested in seeing how the state managed the pandemic.”

Michelle Logan, a 49-year-old Head Start teacher, said that she showed up to the Hannah Community Center in East Lansing this morning to cast a vote in honor of her ancestors.

“It was something my son said to me. He said, ‘My ancestors gave me this right to vote so I should exercise it,’” Logan said. “Also, I don’t think we can complain about stuff if we don’t vote and share our voice.”

Margie Ring, who ran the Precinct 3 polling location at the community center, said turnout this morning was higher than expected.

“We had quite a rush of early voters and this first hour we were busy, which was unexpected because so many people had already voted absentee,” Ring said.

Local clerks offices began the task of preparing absentee ballots to be counted on Monday, although they could not start counting votes until today. It could take until Friday before complete results are know from some areas, the Secretary of State said.