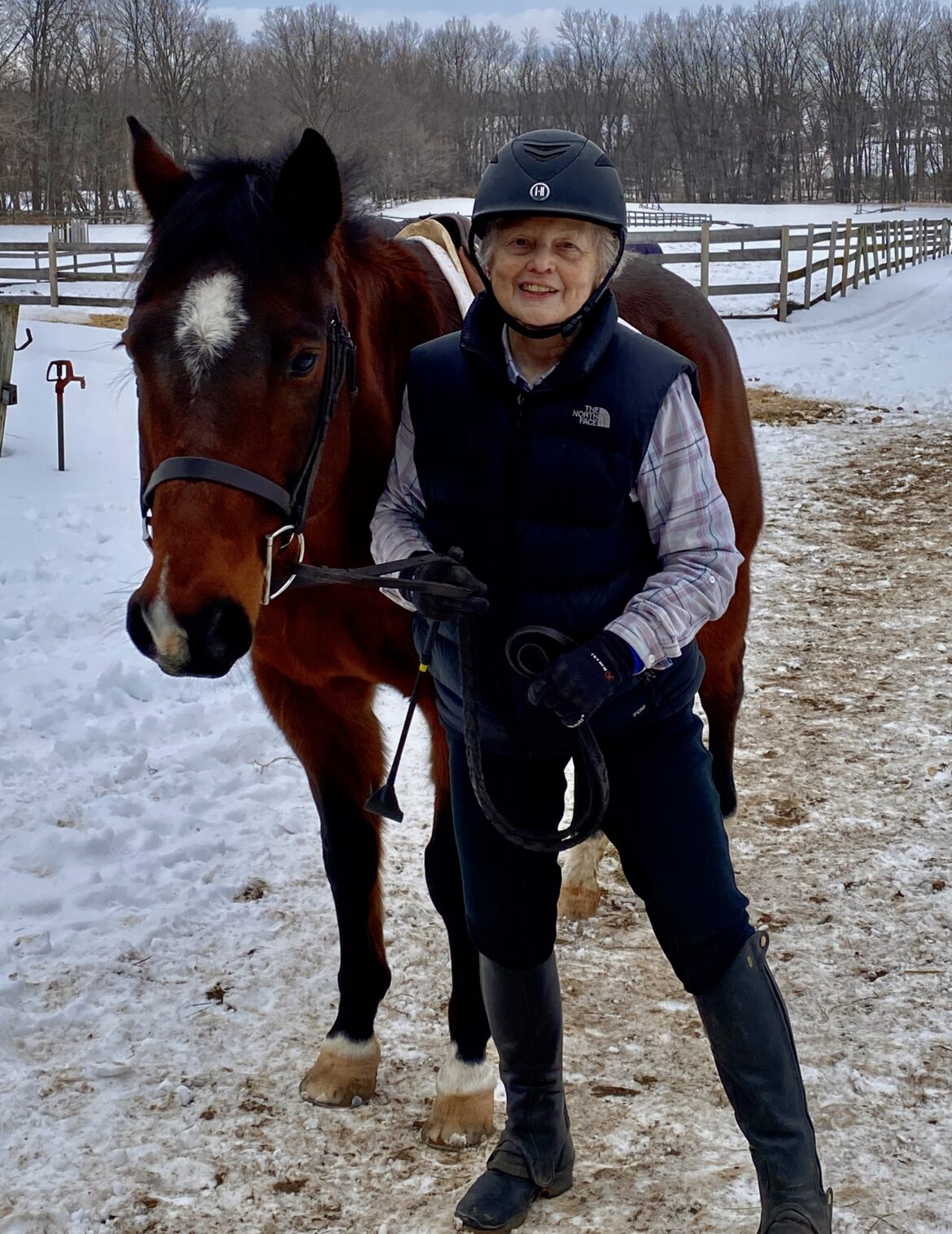 Sheila Schimpf bought a horse, Q the Applause, after her breast cancer returned.

LANSING – Twenty-nine years after I was treated for breast cancer, it came back – and now it is dug in and metastasized.

And so, I bought a horse. Then I bought an 8-week-old golden retriever puppy.

The five-year survival rate for metastatic breast cancer is only 27%, according to the American Cancer Society. In the examining room in the University of Michigan’s Rogel Cancer Center – head spinning – I learned that many people with my diagnosis only made it three years, until recently.

Three years. Five years. Inside I was shouting, “That’s not enough!” Outside, the doctor was saying, “It won’t go away but we can manage it, like a chronic disease. You can live with cancer.” One patient, she said, has lived 10 years with metastatic breast cancer.

That puppy I bought, Sadie, has a lifespan of 10 to 12 years. Her world revolves around me. She needs me.

That horse, Q the Applause, requires a rider to concentrate on him, not moon about anything cancer. And he needs me to ride him several times a week.

So the two of them are both the challenge that everybody else sees and the remedy I know they are.

In the first few months of living with cancer, my thinking about time changed. If I only live three more years, do I want to spend any time doing this? Or that?

I knew what I was up against.

I had Stage II breast cancer when I was 41 years old. It changed my life, and that of my husband and our three kids. I learned how to cope with fear, how to choose what is important, how to fight cancer, how to let people help me, and how to live when the odds go against you. The biggest lesson: forget about control and be happy now.

This time around, those skills came back – eventually. I had fallen, as my father used to say, into a false sense of security. I was done with breast cancer. We told war stories of how hard it had been, as if it were a closed book.

So, for almost three months this time, I refused to believe the symptoms could be cancer.

How could they be?

They were most likely the dregs of the walking pneumonia I was diagnosed with in early June 2019 after a cruise to Alaska. Every other person on the train to Denali National Park had loud, wracking coughs. My husband and I both got sick but he got better and I didn’t. At home, the cough and the shortness of breath surely were related to that. And the pleural effusion (a huge jug of fluid) removed from my chest – twice – contained no cancer cells.

But the fluid refilled my chest as soon as it was drained. The cough – a very deep, unusual cough – didn’t go away. The shortness of breath grew worse. That feeling of dragging through the day was with me all day, every day. Still, when different doctors kept listing cancer as a possible cause, I scoffed.

Finally in September, a biopsy of some cells from my omentum (a fatty apron near the diaphragm) showed metastatic breast cancer. The same damn cancer I had in 1990.

Shock waves thudded through my family.

They went through the same “How is this possible?” moment I did.  My original treatment -– the best you could get in 1990—included two mastectomies, aggressive chemotherapy, five years of tamoxifen, 17 years of Evista and a team effort, with the whole family pitching in.

During those years we were beating back cancer, something else happened.

I lived the life I was afraid I was going to miss. All I wanted in 1990 was to see how it all turned out – the story of our three kids who were 9, 11 and 14. I wanted to go to their high school graduations with my husband and see them through college. I wanted ordinary, everyday life. I wanted to travel with my husband.

I did. For 29 years I lived the Good Life. Because I had a life-threatening experience, it might even have been a Better Life. My priorities shifted. Do things now, a voice in my head (or was that my husband?) kept saying.

We took the kids cruising and to England and Ireland and everywhere else. We made time for them. We ate dinner together. People and relationships were primary. Within a few years we had the dog I always wanted. Life was about enjoying everything now because, as a bumper sticker I posted over my desk said, Life is not a dress rehearsal.

So this time around, after shock and disbelief, my next reaction was gratitude. I was grateful for all those good years when it really counted. The kids are better than OK. Two grandchildren have popped up and a third is in the wings. We are still married. We are still traveling. We still have dogs, and now I have a horse.

This time the prognosis is different. The cancer is here for good. But the drugs we have now are the best we have ever had and new, even better drugs are coming, the oncologist told me. We’ll find one that works and when it stops working, we’ll find another one. Breast cancer research is one of the best-funded research fields, she said.

The first drugs we tried are Ibrance – 21 days on, seven days off – plus letrozole every day.

The letrozole works to decrease production of estrogen and the Ibrance reduces the ability of the cancer cells to divide and flourish.

The side effects so far have been manageable – dry skin, dry fingernails, a few mouth sores, thinning hair. Pfft.

My insurance covers almost all the costs of both drugs.

My job is to get through the day. The best way to do that 29 years ago was to keep going. Aim for a regular day. So that is what I am doing now, trying not to make cancer the center of my week. Live until I die. And take the pills on schedule.

It’s a goal. Some days I just sit in a chair and do crossword puzzles.

And some days I go riding. I’ve only been riding about nine years and I was hooked.

The trainers at my barn searched for a horse I could buy. It takes a while to find just the right horse, they said. It took a couple years.

They found a quarter horse for me to try that same month I was diagnosed with metastatic breast cancer. I could keep him or send him back and pay only the shipping.

He was priced way below my budget, probably because he is not the horse of my dreams. He is older and smaller. He needed several hundred dollars’ worth of dental work, a daily supplement, and intense farrier work because of a small birth defect in one leg.

But I had waited too long. He was mine.

No one searched for the puppy. When one of our goldens died that fall and the other turned 12 and a half, the possibility of life without a dog cropped up. I found an 8-week-old golden retriever puppy that I thought was exactly what I needed. She sat quietly at the breeder’s, watching me, then snuggled when I picked her up.

And I was wrong. She is smart. She is exuberant when she sees me. But mostly she is a high-energy blur – athletic, agile, running toward new things, never pausing to consider the risk. That’s how she greets life—head-on, at full speed.

She is a role model.

It’s been a year since the word “metastasis” became a part of my life. Regular blood tests and CT scans check for cancer. This last round showed no new cancers. Some of the existing spots were smaller. I began to believe in the new drugs. I stopped making every decision based on a three-year life expectancy.

Then, the pandemic happened.

Because my immune system is compromised, we can’t travel, even now with things opening up. That means the thing I need the most – time with my family – is impossible because one of our sons lives in California and one in Virginia.

We FaceTime. In the early spring, riding lessons were cancelled but now I am back in the barn two or three days a week, masked up. We walk the puppy, steering away from anybody else on the sidewalk. Without distractions, I work hard at not dwelling on the wasted months. I go to sleep listening to recorded books.

Our daughter lives an hour away and we started meeting her for dinner. On those days the pieces of the universe fall into place and life is right-side-up again.

It even seems we are winning.

The new kind of winning – living with cancer and not letting it stop me from finding that elusive everyday Better Life. It’s a victory measured in horse rides, dog walks, outdoor dinners with our daughter and laughs with the others on FaceTime.

The drugs are working. I am still here.

And every day I find things to be grateful for.

Sheila O'Brien Schimpf is a former newspaper reporter and columnist and is the copy chief for Capital News Service. She also covered Michigan legal and financial news for BNA.com in Washington D.C. for five years. She has two degrees in journalism and taught several classes at Michigan State University. She is the author of two breed books about Yorkshire Terriers and Golden Retrievers published by TFH.