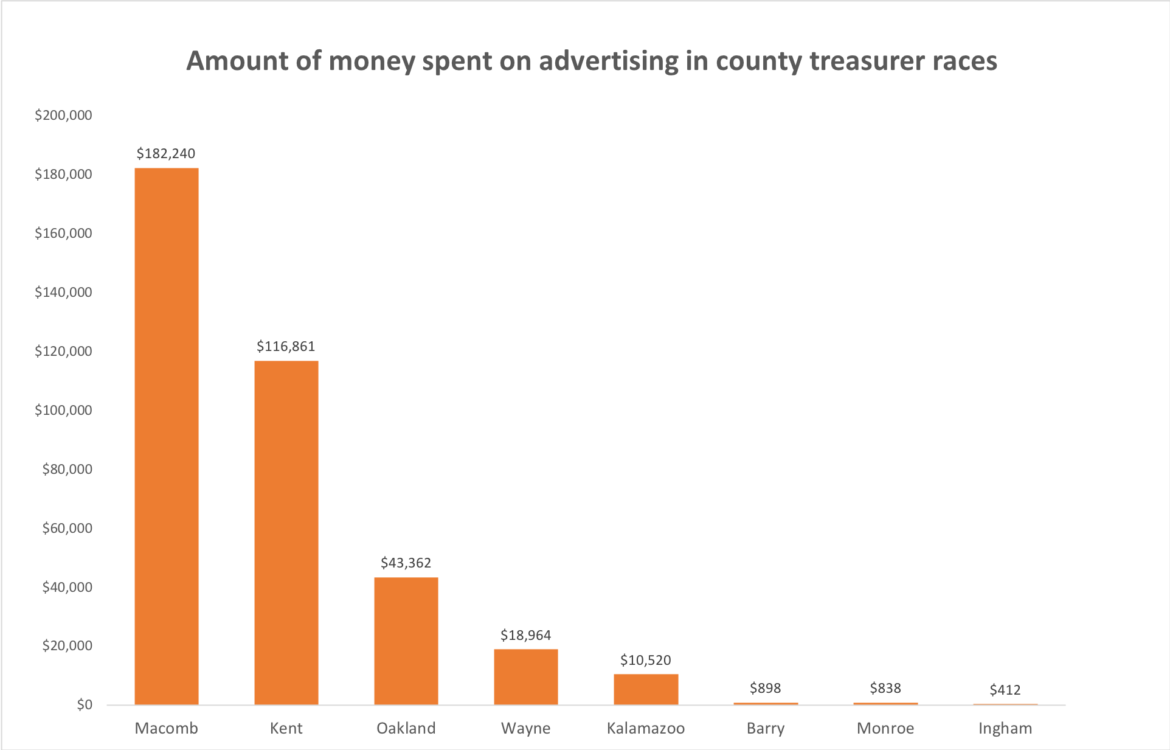 Amount of money spent on advertising on county treasurer races in eight of Michigan's 10 largest counties between Jan. 1 2018 and Sept. 23 2020. Graphic: Zhao Peng

By RI’AN JACKSON AND CHLOE ALVERSON

Political candidates spend thousands of dollars on advertising to secure a spot in office.

And the heavy spending is not confined to the big federal and state races. Finance records from Jan. 1, 2018 to the post primary filing deadline of Sept. 23, 2020 show that the median spending on advertising was just over $8,000 by county treasurer candidates in eight of Michigan’s 10 most populous counties.

“Politicians have to be able to answer difficult questions,” said Robert Kolt, president and CEO of the Okemos public relations firm Kolt Communications. “And when they can’t, they rely on advertising to create a positive public image that maybe they don’t really have.”

Treasurer candidates among these eight counties — Macomb, Kent, Wayne, Ingham, Kalamazoo, Oakland, Washtenaw and Genesee — spent more than $370,000 on advertising during the period studied by Michigan State University journalism students. That was money spent before a post primary filing deadline and didn’t include the period just before the election when spending intensifies.

Candidates in Genesee and Washtenaw counties received a reporting waiver available to those who expect to raise and spend less than $1,000.

Larry Rocca, Republican candidate for Macomb County treasurer, spent the most in ads, totaling over $115,000. His opponent, Lorie Barnwell, spent just over $67,000.

Advertising creates awareness and connections with voters, said Kolt, whose company has offered campaign consulting for years. “To really persuade people, you need to go to a medium that’s a lot closer to interpersonal communication.”

Advertising is the most important part of the campaign and takes up most of the budget, said Robert Wittenberg, the Democratic candidate for Oakland County treasurer and who spent over $35,000 in advertising during the study period

“It’s so people know who you are, what you stand for and what issues are important to you,” Wittenberg said. “There’s a lot of people who may not know every single person who’s on the ballot.”

Voters may be unfamiliar with the position, he said. And advertising helps.

“It’s important for us to make sure that people are aware of who I am and why I think I’m the best, most qualified candidate,” Wittenberg said. “And so, we spend that money to get the name out there.”

“The way I think about the campaign is we print the literature and mail it, have people knock on doors and canvas,” Wittenberg said. “Our number one cost is mailing — postage, printing for mailers. We have one mailer that went to about 170,000 households in Oakland County.”

Wittenberg spent over $26,000 on stamps, printing and mail processing.

Digital media is another big buy. Treasurer candidates during the study period spent over $26,000 on digital advertising fees like social media, website development and graphic design services. Just under $14,000 was spent exclusively for social media platforms.

“Social media has really changed the campaigning climate,” said Nash, the president of the Michigan Association of County Treasurers. “You used to have to do door-to-door and mailings. [Now] you can get a lot done through social media by sharing and likes and friends of friends.”

“I think it’s beneficial,” he said. “I’ve been campaigning since 2013 in various capacities. There’s also kind of an age divide depending on which platform you use. Facebook skews a little older. I would say Twitter, Instagram skew a little younger.”

Candidates like Kalamazoo County Treasurer Mary Balkema believe direct mail is the most effective campaign advertising. She spent over $2,000 — almost 40% of her total advertising costs, on mailing costs.

“Social media has a wider audience, but doesn’t necessarily target down to a specific voter, address or precinct,” she said.

After this election season, Balkema will have sent out 250,000 pieces of direct mail.  Even as an incumbent candidate, advertising is still extremely important to her campaign, especially during a pandemic, when there’s less face-to-face interaction.

“To have direct contact with voters in a pandemic is difficult,” Balkema said. “They’re afraid.”

Incumbents have a natural advantage in elections — 92% of members of Congress get reelected, Kolt said. That doesn’t diminish the need to directly connect with voters.

Wittenberg noted he still goes door-to-door to canvas amid the pandemic.

“We will put literature in their door, knock and then step about 10-15 feet back,” he said.  “We’re wearing a mask the whole time.”

“While campaign signs don’t increase voter turnout overall, the signs provide a small boost in a candidate’s chances in areas where they place them,” Jonathan Krasno, political science professor at Binghamton University in New York, told The Chicago Tribune.

Treasurer candidates in Michigan’s eight largest counties spent over $26,000 on yard sign fees to campaign for the upcoming election. That includes payments for labels, zip ties, poles as well as the signs themselves. Macomb’s Lorie Barnwell spent the most on yard signs — almost $9,500.

But regardless of how candidates advertise, there’s still a mystery surrounding which is most effective.

“That’s always the question on candidates’ minds: What really makes people vote the way they do? Is it the signs? That’s the magic question that all candidates want to know,” said Nash.

This story is part of a series that looked at finance reports filed for Michigan county treasurer, drain commissioner and sheriff campaigns. Michigan State University students from four classes examined reports filed between Jan. 1 2018 and the post primary filing deadline of Sept. 23, 2020.

Stories in this series: