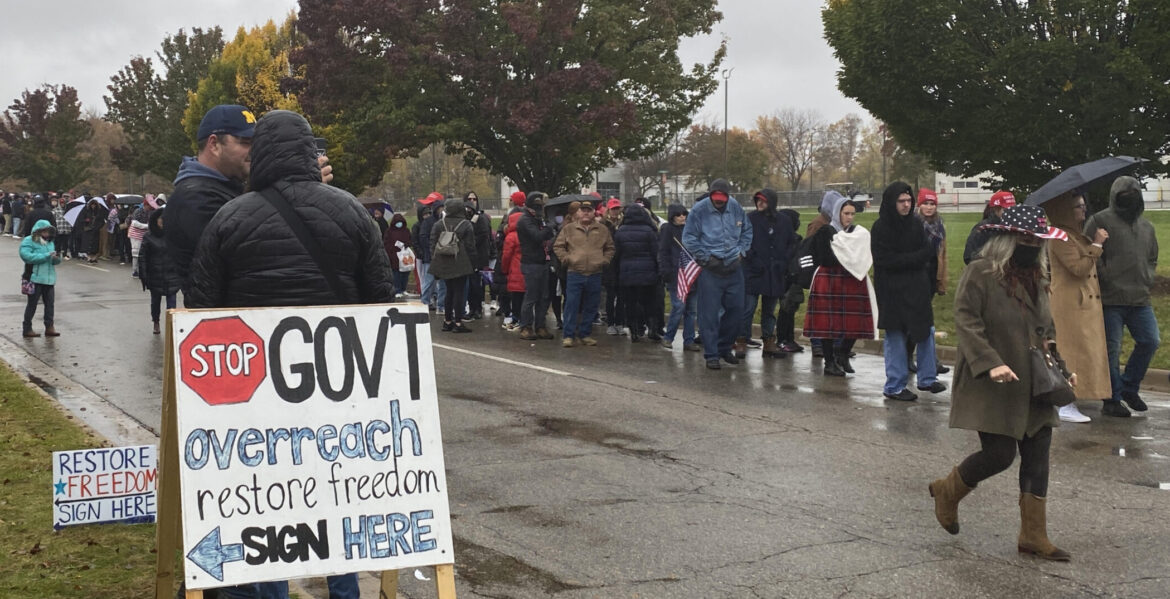 Jerry Paul Monjes said, “I drove last night from Chicago, arriving here at 12:30 a.m. and slept in my car for a few hours. A bunch of people were in line at 5 a.m., so I was disappointed not to be near the front.” The rally was scheduled for 2 p.m.

He said, “I have not voted yet, I am very excited about voting in person on Election Day.”

A Joe Biden supporter from East Lansing who did not want to be identified because she feared for her safety said, “I wish Trump would not come here. He’s toured Michigan enough with his anti-masker COVID-spreading supporters. I hope there is a sufficient protest against his presence here.

“I’ve read articles about how they plan to bring guns to the polls to “watch for voter fraud.” Well, they can do that without guns or with concealed guns. Showing off their guns does one thing: voter intimidation, which is their real goal. I voted early and so did my son in order to avoid this crowd.

“I think he is fine with the militia and Proud Boys, etc. Reading his words as a call to action, but he won’t admit it publicly. Such a disgrace, it makes me so sad and sick that he is the president.”

Monjes said, “I have found it interesting that the rhetoric between Gov. Whitmer and the president has gotten to this level. I know for a fact that she isn’t a fan of this event happening here today.”

Michigan Gov. Gretchen Whitmer, a Democrat and member of Biden’s campaign team, said she did not want to see a Trump rally in Michigan with the virus spiking. Trump and Whitmer have sparred for months. He called her “that woman from Michigan,” criticized her COVID-19 sanctions and Tweeted she should open up Michigan. She said his rhetoric supported people who are in jail on charges they plot to kidnap her.

This is Trump’s second stop in 10 days in Michigan, a battleground state both parties want. At an Oct. 17 Muskegon County Airport rally, Trump supporters chanted “Lock her up,” in reference to Whitmer, a chant frequently used when he ran against Hillary Clinton in 2016.

Trump’s 2016 margin in Michigan was his narrowest in any state.

Brian Moore of Romulus, Michigan, said, “I think Gov. Whitmer is completely out of line with her statements about the president being here. If you look around everyone is happy and the energy is positive. Definitely more positive than the energy she created by shutting us down while other states were open and businesses and families struggled.”

Before Tuesday’s rally, many in the parking lot and in line, did not have masks on and were not social distancing. The lines to get into the security line people were standing basically shoulder to shoulder, the exact thing the governor was worried about. At the Muskegon rally, the Trump campaign enforced wearing masks, temperature checks and provided hand sanitizer.

Moore said, “in 2016 I didn’t go to any rallies, just kind of watched from the sidelines but now to be out here with these people is great you can feel the energy”

“I am voting on the day of, walking into my polling place and casting my ballot.”

Democratic presidential candidate Joe Biden is scheduled to come to Michigan on Saturday. The location has not been announced.

It will be his fourth late-campaign visit to Michigan. He visited Southfield and Detroit last week.

Republican Vice President Mike Pence will be speak in Flint at 7 p.m. Wednesday and Democratic vice-presidential candidate Kamala Harris was in Detroit on Sunday.

Jarrett Maki is a journalism major at Michigan State University with a minor in sports and broadcast journalism. His journalistic interest is mostly centered around the politics of the fans and of the teams in the sport of soccer and the finances behind publicly funded sports stadiums. He hopes to become a play-by-play announcer for soccer in Europe when he graduates.

My name is Stephanie "Stevie" McCullum and I'm a journalism major at Michigan State class of 2022. I am currently the social media chair of the Michigan State chapter of the National Association of Black Journalists. My passion is sports and entertainment, my dream is to either be a sports analyst for ESPN or a VJ for MTV. At the moment I am collecting Beastie Boys memorabilia.

Kyana Donaldson is a Metro Detroit native who began attending Michigan State University in 2018. Her interests include journalism and public relations. In addition to writing for the Spartan Newsroom, Kyana has created content for the MSU Center for Anti Counterfeiting and Product Protection

Hello. My name is Jonathan Zinn. I am a student at Michigan State University studying journalism with a concentration in media design. After college I am interested in going into the field of sustainability. Writing is one of my passions as well as sustainability, so I am trying to combine the two for a job after college. I love the outdoors and coffee.