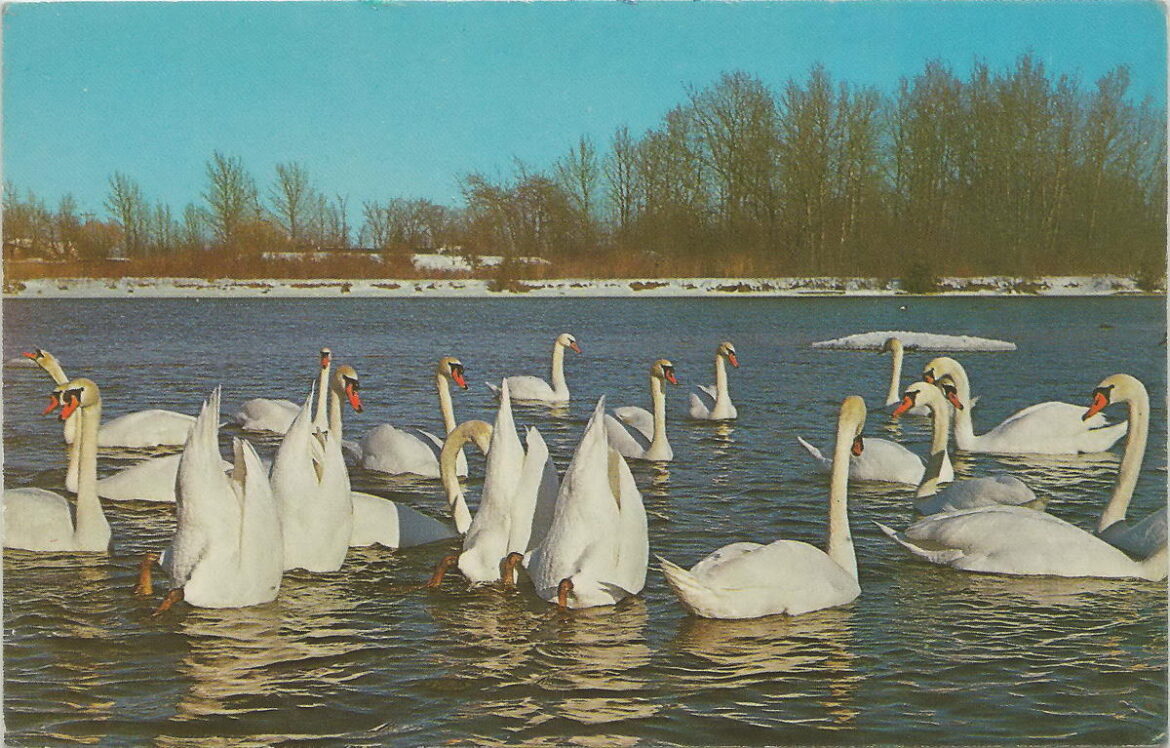 A vintage postcard from Charlevoix says the area's flock of mute swans descended from a pair gifted from Iowa. The birds became so numerous that East Jordan "came to be known as 'The Swan City,'" the card claims.

LANSING — Brian Allen was kayaking through Arcadia Marsh in Manistee County when something big and white dove at him. He had to use his paddle to defend himself from the attacker — a mute swan.

But the incident hasn’t kept Allen, an avid birder, from the marsh.

“If I could be God or have God-like powers, I’d like to do a hundred things to make this marsh better,” he says. “But the two main ones would be to get the water level lower, and the most important thing would be to get rid of the mute swans.”

Water levels have risen 2 feet over the last few years in the area as climate change brought more extreme rainfall to the region. While many other birds struggle with high water levels, mute swans thrive.

The birds, originally from Europe, were brought to Michigan in the early 1900s to decorate parks and homes.

The species is highly territorial and will attack pretty much anything too close to its nests.

“They’ve gone through areas where other birds nest, and they stamp their eggs and destroy the nests,” Allen says. “And they’ll directly attack other waterfowl, too.”

They also destroy plants that serve as fish habitats and food for other birds.

A full-grown mute swan eats 6 pounds of food every day and destroys an additional 6 pounds, according to Allen.

When the birds forage, “they waste about 50% of what they’re kicking up,” Allen says. “It’s not only ducks and geese and other swans that are affected, but all the life in the wetland.”

This grazing especially affects migratory birds that rely on wetlands like Arcadia Marsh to rest and refuel.

With high water levels limiting where they can land, and mute swans leaving them little to eat, migratory birds are running out of places to go, according to Allen.

And in many places like Arcadia Marsh, mute swans have no predators.

The Department of Natural Resources counted nearly 16,000 mute swans in Michigan in 2010.

“It was right around that time we decided we really needed to take mute swan control a lot more seriously,” says Barbara Avers, a DNR wildlife biologist specializing in wetlands and waterfowl.

Most of the time, the DNR controls the population with firearms.

The agency has been on track to reach its 2030 goal, but a recent study from Central Michigan University shows that might change.

It found that more mute swans are beginning to move into urban areas.

Runoff from cities fills wetlands with nutrients, which allow for a lot of plant growth to support swans’ demanding diets. And because mute swans were once domesticated, they might like living closer to people, according to the study.

People like living close to swans, too, and many wouldn’t like to see them killed, according to Avers.

Previously, the DNR has mostly shot mute swans on state-owned land away from people, so citizen interference hasn’t been a huge issue.

The DNR can only remove swans if it receives a request from a property owner to do so. And city residents who enjoy the swans are unlikely to ask that they be shot.

“Those urban center populations might serve as refuges that repopulate other areas across the Great Lakes,” explains Central Michigan University biologist Thomas Gehring, the author of the study.

At Arcadia Marsh, land managers are working on a plan to decrease the mute swan population without upsetting the public.

Allen understands the public’s appreciation of mute swans but says it’s important that people know the true cost of their presence.

“Think of all the other birds that migrate through here,” he says. “There’s so many other good things out here that need these places too.”