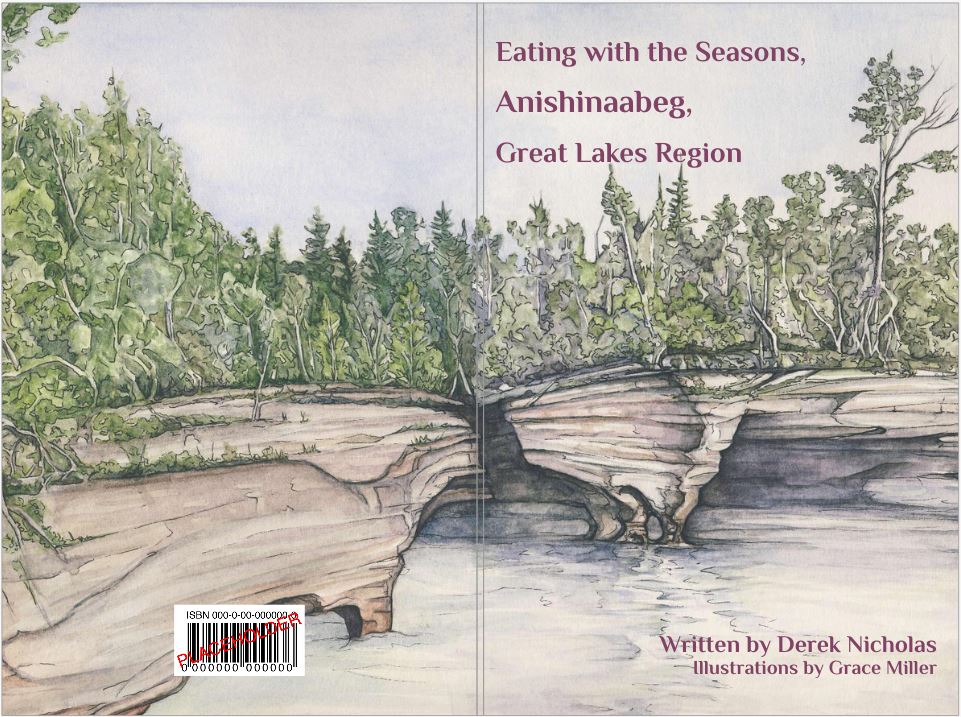 LANSING — A new cookbook serves up the culture along with the food of the Indigenous people of the Great Lakes region.

“Eating with the Seasons, Anishinaabeg, Great Lakes Region,” combines recipes, language and the history of the Anishinaabeg (uh-NISH-ih-NAH-bay). The name refers to culturally related tribes of Indigenous people found mostly in Michigan, Canada and elsewhere in the Great Lakes area.

A hunger to preserve a piece of American culture and a developing interest in food are the main ingredients that prompted the cookbook, said author Derek Nicholas, who is a member of the Red Cliff Band of Lake Superior Chippewa and a senior at University of Minnesota, Morris, in rural western Minnesota.

The Anishinaabeg also include the Odawa, Saulteaux, Ojibwe, Potawatomi, Oji-Cree and Algonquin peoples.

“Back in the day, elders would take their sons and their daughters out fishing and they would use the language,” he said. “You’d hear how to catch the fish, how to net fish, how to cook the fish. Nowadays that’s just not the case. If we can revitalize the language and the food, or both, it will all come together as one.”

The cookbook includes simple and traditional recipes for each month, including recipes for curried squash soup, venison chili and Nicholas’ favorite, the purple pollinator snack. That’s like a breakfast salad with berries and herbs, Nicholas said.

Along with recipes, the book includes Anishinaabemowin phrases such as “Ininamawishin zhilwitaan,” or, “Pass me the salt.” It reports bits of history, as how the people used different moons as a calendar of when to hunt, plant and harvest.

The book is available for free on the University of Minnesota website. Print copies can be ordered at blurb.com for $16.

“I think it is important because it’s our story,” Nicholas said. “If we lose our language, we lose our spirit.”

The book also features soft, pastel watercolors by Grace Miller, a University of Minnesota student who met Nicholas while volunteering for their school’s gardening club. A conversation about native foods and plants led him to ask her to get involved, she said.

“My favorite part of the illustrations was chatting with Derek during the creative process and adding the final touches at the end,” Miller said.

Nicholas, who grew up in the suburbs of Milwaukee, said he had little knowledge of his cultural heritage when he arrived at the small town of Morris as a freshman.

His classes sparked the need to learn more about his ancestors and help serve the community. His interest in food centers on food sovereignty, which is the idea that people deserve healthy and culturally appropriate foods.

Nicholas also created a meals program for low-income people and worked to expand healthier options at a local food pantry.

Mary Jo Forbord, Nicholas’ supervisor at the University of Minnesota, said his interest in food might not have been what he expected when he arrived in the small town sight-unseen after growing up in suburban Milwaukee, but he made a difference by connecting with community leaders and embracing his cultural roots.

“I believe that food took Derek by surprise,” Forbord said. “He exclaimed something like, ‘You’ve got to be kidding.’

“He was expecting something different from college than what he saw here. But as he looked deeper, his journey through food in this place led him in a direction where we can all see many good results.”

Nicholas graduates this fall with a degree in economics. He said he hopes to find work in food systems but may continue to graduate school.