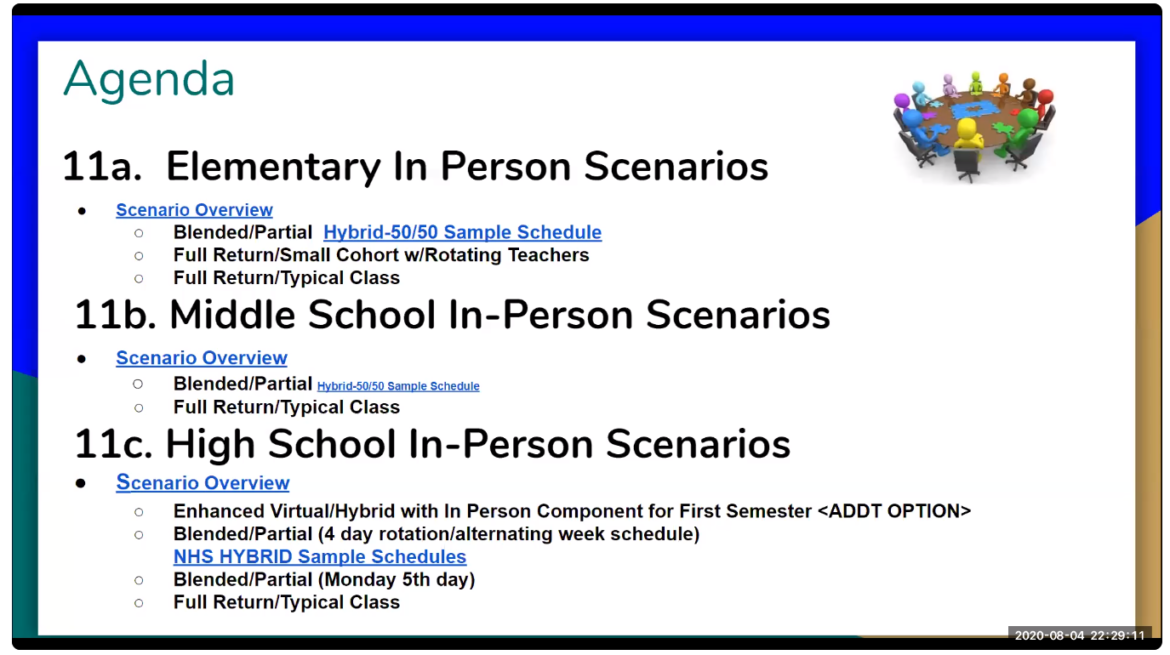 A slide from the Northville Board of Education meeting displaying all of the options for restarting school in the fall.

An eventful Northville Board of Education Zoom meeting on Aug. 4 at 6:30 p.m. and ended at 12:44 am contained a two-hour citizen comment, which was kicked off by Michelle Heldke, a Northville resident, who wants in-person school for her daughter.

“The alternatives you have laid out tonight don’t work,” Heldke said. “You have not given us a good choice and your hybrid is not going to work.”

Heldke’s comments relate to the Northville Board of Education’s decision between a set of options set by the Superintendent Mary Kay Gallagher and a task force compromised of district administrators, educators, parents, students, and healthcare officials. COVID-19 forced school districts around the state to mull potential options for how students will be taught this upcoming semester. Those options included full online learning, full return to school, and different versions of a hybrid method, where students will sometimes be in-person and online.

“We have had over 130 people involved in the task force,” Gallagher said. “They were charged with researching a range of scenarios to address the Northville Public Schools re-entry plan.”

However, the Board of Education needed to elect a new president and vice president first. The board members voted to remove and censure its now former president, Matthew Wilk, due to comments he made on social media.

Matthew Wilk posted a comment on social media saying, “How about we allow schools to reopen and Grandma can take the extreme precautions? She can wear a spacesuit when she ‘needs’ to go out and shop, and the rest of the world can go about their lives, instead of shutting everything down because she might get sick. It would be pretty selfish of Grandma to have everyone else take the burden of her risk.”

A petition of 4,000 signatures was created shortly after that post in hopes of forcing his resignation.

Then, Mary Kay Gallagher showed the courses of action the district will take in certain scenarios of positive coronavirus testing.

The citizen comment allowed any citizens of Northville two minutes to express their opinions to the board about the upcoming decision. Some citizens were for the hybrid and some were against it.

Heldke said that she is against the hybrid. Jeanne Deren, a Northville resident and a mother of five kids who all attend Northville Public Schools, said she would prefer to have the online education.

“I’m concerned that when it does spread in our community and schools that we will be forced to go online and then we will be back in that kind of crisis mode,” Deren said. “I would prefer to have the online education up and running in a healthy way so that our families can prepare, rather than a back and forth.”

After citizen comment the board discussed the options and came to a decision. They decided to have the elementary schools to have a full return to typical classroom settings, the middle schools and high schools to have a hybrid.

All schools will also begin the semester fully online, and then Oct. 5 will be the first day the hybrids and full return will begin.

The board concluded the meeting shortly after the decision and board treasurer Cindy Jankowski said she was grateful for everyone’s hard work.

“I think it is great that everyone has hung in as long as they can, sweet dreams!” Jankowski said.

Nick Maiz is an MSU junior majoring in Statistics. He went to high school at Northville High School, which is located in his hometown of Northville, MI. He hopes to one become a sports writer or beat reporter.