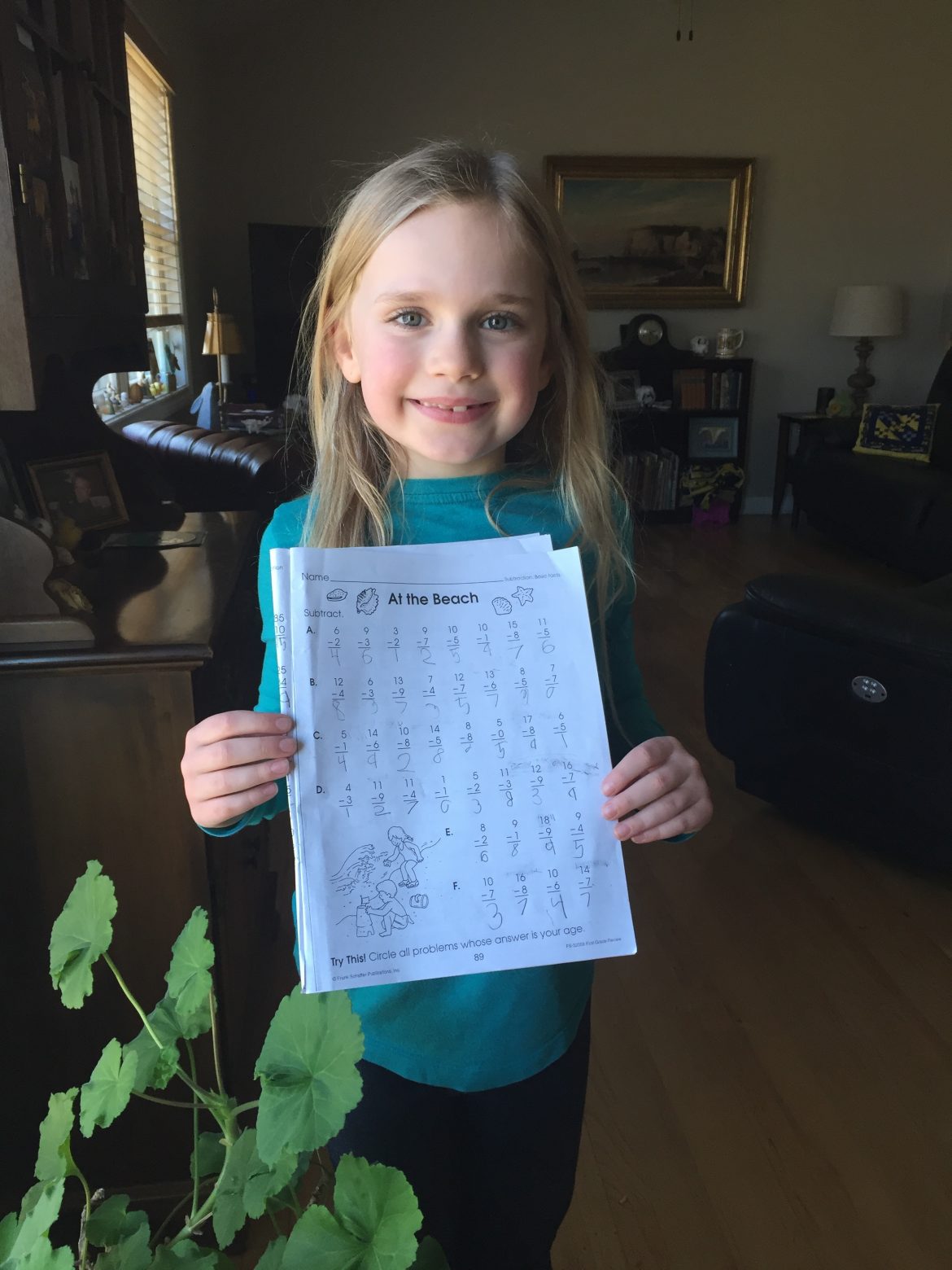 Lilly Pashby (first grade) shows off her home-learning materials to her mom.

Lacy Jewell, like many seniors at Charlotte High School, said that in the past few weeks, she’s learned to not take anything for granted. She said she’s been dreaming about end of high school experiences,such as prom and graduation, her whole life.

“I would give anything to go to school at 7:30,” Jewell said. “I think we’re all realizing that we’re not going to take the little things for granted anymore.”

Gov. Gretchen Whitmer issued an executive order April 2 to close Michigan schools for the remainder of the school year. Since then, Charlotte Public Schools has been providing  students with academic preparation from afar.

Superintendent Mandy Stewart said the schools have been preparing for the worst-case scenario since before Whitmer closed the schools.

“There was pre-planning behind the scenes because we didn’t know what would happen, and we tend to worst-case-scenario everything just in case,” Stewart said. “But as far as communication, we are finding out when the public is finding out.

“As a press conference happens, we have to implement those plans as quickly as possible,” Stewart said.

Liz Pashby is the mother of two students at Parkview Elementary. She said keeping her young daughters informed has been a balancing act since the pandemic began affecting their lives.

“As a parent, we don’t have those definites that we can give to them,” Pashby said. “So, trying to give them a definite in a way that they can comprehend it and keep it truthful, too is, I guess, the tough part.”

Sarah Rohlfs, an English teacher at the high school, said the news about coronavirus spread in Washington state caused her ever-increasing anxiety in early March.

“I was trying to remain as calm as possible and model that kind of calm, but I was also trying to prepare myself emotionally and professionally for what some kind of closure would be like,” Rohlfs said.

One of Rohlfs’ seniors, Madi Auten, said the high school musical’s opening night had been cancelled that week, making it the first domino in the rush of cancellations.

Auten said students began speaking to each other as if they were going to war — that they would see each other when they came out the other end.

“For me and for a lot of people, I don’t think that we expected the two weeks to be the whole year,” Auten said. “A lot of us didn’t prepare or expect for it to be as big as it’s gotten.”

Jewell said the cancellations started increasing as the week of March 9 went on, and she soon realized her senior year wouldn’t be the same.

“It got more serious every day,” she said. “It was a very helpless feeling to know that I can’t do anything to get those opportunities.”

Rohlfs said that, for her, it’s important to take care of her students first as people.

“Emotions are super high; we’re grieving the loss of some traditions and milestones,” Rohlfs said.

Principal Jeff Bohl said his biggest task right now is maintaining the school’s sense of community to give students a semblance of normality.

“Our teachers are doing everything they can to connect with students and to create a feeling that we are still a thriving community that is here for everyone’s support,” Bohl said.

Stewart said the first priority is to encourage teachers to connect with their students and their parents. Following that, an academic plan will begin rolling out.

Stewart said parents can expect FAQ sheets coming soon with more guidance. She said everything the school is getting from the state, governor’s office, and other sources  will be communicated to parents.

“As much as we want to answer everybody’s questions, we also want to make sure we’re giving them the correct information,” Stewart said.

Bohl and Stewart said there are general unknowns when it comes to events. Because it’s unknown when Whitmer’s “Stay Safe, Stay Home” order will be lifted, convening events like graduation and prom cannot be known yet.

Pashby said her daughters have shown a lot of tears since learning from home.

“Because of the workload, I think it’s more of just re-adapting to ‘this is the new now,’ and that makes them a little bit sad that they’re sitting here themselves doing it rather than being with their friends,” Pashby said.

She said that with her third grader, “We just sat down together and I talked to her about what she was doing in her classroom and those kinds of things. We made a plan, her and I together, using those resources (the district) sent us.”

Rohlfs said very few teachers have experience teaching online, so a lot of these tasks are completely new.

“Whatever teachers are creating, we’re creating this under the understanding that not every single kid has equal access and can equally participate,” Rohlfs said.

Bohl said the rural nature of the area is an obstacle. He said throughout this process, there has been an overwhelming feeling of grace in the community.

Stewart said the district will have a distance learning plan in place very soon, with frequent communication to parents with the details. She said she is hoping for more state and Michigan Department of Education guidance to help.

“As we’re assessing the need, we’re also looking at plans of how to distribute or connect families with devices,” Stewart said.

Stewart said the district submitted an education plan to Eaton RESA, which will review it and submit it to the state. Stewart said CPS will be rolling out support and recommendations before then.

“In times like this, it really shows how much people are thinking of their community and how much they want to help, and Charlotte has really pulled together,” Stewart said.

She said she is immensely impressed at the ability of teachers to, in a very short time period, gather materials before they left school.

Bohl said the situation will forever change the district. “Education is definitely going to shift; we’re going to be more nimble,” he said.

Stewart said it will be important to honor this year’s seniors despite the difficult situation.

“In an ideal world, we would have every event that we possibly could, but prioritizing student safety and health in our community, we are going to have to look at other options,” Stewart said. “It’s going to have to be an ongoing plan to figure out how we can recognize them because it’s sorely needed.”

Auten said she does worry.

“It’s scary to think about graduation or what my fall semester of college might look like,” Auten said. “I realized the other day that the next classroom that I’ll be in will be in college. I’m worried that I won’t feel the closure of high school if we don’t have a graduation, but I know that our administration will do what they can to help us out.”

Bohl said that, for seniors who are moving onto secondary education, he expects colleges to step up.

“Colleges are going to help take care of them in the same way that we’re going to go out of our way and do some exceptional things to transition them out this year,” he said.

Bohl has been leading the charge to honor the class of 2020 in any way possible. He made and posted a video addressing his students, discussing these issues and asking for feedback from the class of 2020 to meet them in the middle.

“We are going to celebrate our seniors. We’re going to send them off in style,” he said in the video.