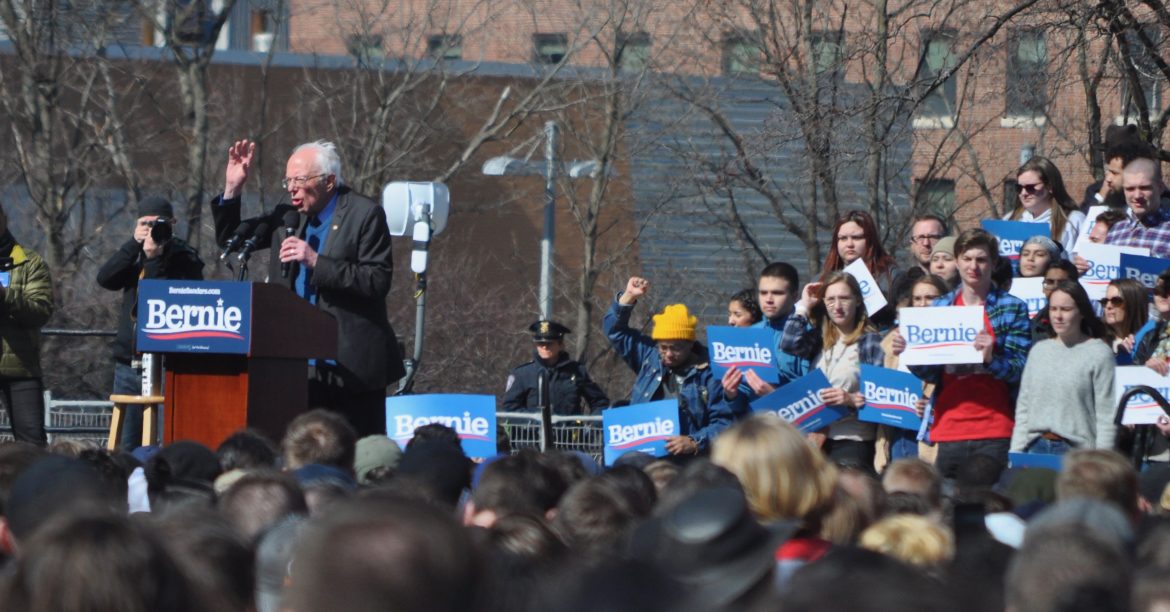 Bernie Sanders visited Grand Rapids to rally with the crowd Sunday afternoon, two days before the Michigan primary. Many who attended said they they were excited to see Sanders in person and hear him speak about his campaign.

Frankie Johnson, 20: “I support Bernie Sanders. I saw him in 2016 when I was in high school and I really backed his ideas, and now I see my future can be helped.”

Vic Collier, 21: “I’m here because I support Bernie Sanders. Most of the things he said I agree with 100%, especially being a person of color in America, especially as a queer person of America. I’ve never had a candidate that actually cares about what happens to people like me, and Bernie Sanders has been the first person to actually do that.”

David Martin, 65: “I love Bernie Sanders and I think he’s the best hope for our country to move forward, and if he’s not elected I don’t know where we’re going to head. I knew his message pretty well, I’ve heard it many times. It’s just been consistent and nothing new that I heard today. The consistency and the life he’s lived to back it up is all I need to know.”

Rodolfo Hernandez, 17: “I came to support my boy, Bernie. Had to support him. I had to put all my faith in him.” He said he was excited to hear Bernie “talking about equality and the rights for other people, and keeping discrimination off the streets.”

Rolando Hernandez, 23: “I try to keep a close eye on the delegates and election that’s going on right now. So I’m a big Bernie supporter, I’m kinda iffy on whether he’s going to win or not because of Biden’s big poll on Tuesday, but … he brought Abdul El-Sayed and Jesse Jackson Jr. He’s going hard and trying to get the voters out. It made me see that he really didn’t want to lose Michigan when I saw those two.”

Brian Palmer, 25: “We need to be here to support Bernie. Bernie is fighting for all of us and we need to fight for him. I just know that Michigan is an important state for Bernie to win, especially with how Super Tuesday went. I think Bernie is the only candidate that can bring our country in the direction it needs to go.”

Josh Webb, 28: “I believe in a green new deal and I believe that Bernie is a stronger candidate than Biden to defeat Trump.”

“Health care is a human right, and it’s a travesty that we’re the only country that’s developed that doesn’t guarantee that for everyone, and there was that Yale study that showed like 66,000 people died a year due to the way that our health care is structured.”

Benjamin Kiaunis, 35: “I came here because I really like Bernie Sanders’ message. I think that he’s the only candidate or politician on the national level that really talks about working-class politics, and having worked a lot of working-class jobs in my life, especially after school, going through some of those struggles and understanding what those impoverished in America go through, I think his policies are going to be best suited to help those people.”

Mark Poletti, 63: “It was nice to see Jesse Jackson and the mention of the Rainbow Coalition, and to know that we wanted Michigan with him. I campaigned in East Lansing. It was the first time I knocked on doors with all the great students that came out in 2016. They changed my attitude towards millennials. It was like a hive mentality. They went out, knocked on doors, came back and knocked on doors again. It was amazing and we beat Hillary in 2016, so it was such a great thing.”