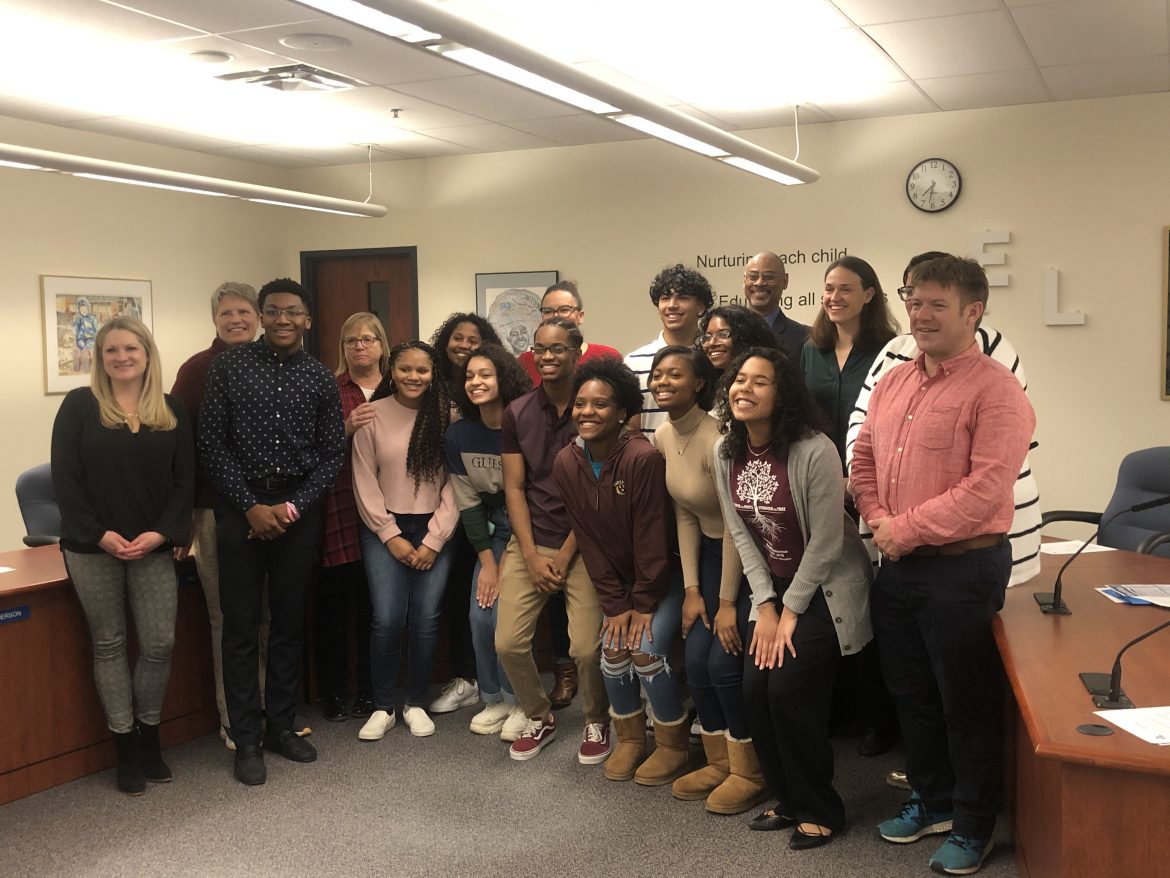 Scholars stand with the East Lansing School Board after sharing presentations about their experiences at the MSAN conferences.

As explained by the scholars, global majority emphasizes that minority students may be part of minority groups in the United States, but they’re in the majority globally.

At the East Lansing School Board meeting on Feb. 24,the groups recounted their experiences at the conferences and shared their action plans to prioritize global majority student involvement at East Lansing High School.

“Instead of degrading each other, we should learn to celebrate each other and get to know each other and just have a better understanding of everybody on campus,” said Kalaia Hampton, who attended the Boston conference.

Both conferences featured guest speakers, college visits, city tours and opportunities to connect and network with scholars from across the country.

Anaiis Rios-Kasoga, who attended the conference in Wisconsin, said her  biggest takeaway was discovering the impact it had on her.

“I didn’t realize that I had never been in a room with that many kids who looked like me before,” Rios-Kasoga said. “I think it’s not something you think about, but when I was there I think everybody felt like this. It was overwhelmingly fantastic to see other kids who looked like me, felt the way I felt and have experienced what I have experienced … It was so enriching.”

The groups created a “Freshman Year Tips For Global Majority Students,” cheat sheet and  pitched a Fall Club Rush as their key plans to implementing more involvement from global majority students at their high school.

School Board Member Terah Chambers responded personally to the presentations.

“I’m inspired by your stories. I certainly identify with the experiences that you have. I didn’t go to East Lansing High School, but I went to a similar school where I grew up in Minnesota and there were lots of parallels,” Chambers said. “I am so happy that you had the experience of being in a room of people that look like you, who are as dope as you, who are doing the same things you are doing and caring about the things that you care about. It’s not a small thing. It’s a very impactful thing.

School Board Member Erin Graham, who said she knew a number of the scholars, praised the leadership they showed.

“You all are thanking us with your words and with your sign, but I would like to thank all of you for being leaders, not only in the school community but in the community at large,” Graham said. “I’ve seen you be leaders time and time again in the broader community as well, so thank you because that’s a lot of work but you’re really making a difference.”

Chambers seconded Graham’s comments on leadership and said the school board also has a responsibility to help the scholars in their efforts.

“To the degree that we can be doing things to help shift the culture, we are all committed to doing that,” Chambers said. “There is not a price tag that could be put on the leadership that you are displaying or the kind of impact that is going to have in our school and on the students who are coming through. We are so lucky to have you all here.  Any dollar that we spend supporting this program I have not a question about because it is far beyond whatever the financial investment is.”

Jayna Bardahl is a journalism student at Michigan State expecting to graduate in May 2022. She is minoring in Sports Journalism and Public Relations with hopes of working in the sports media industry after graduation. Bardahl has worked at The State News since Jan. 2019, her current role is the men's basketball beat reporter. Aside from employment Bardahl is also a member of The Association of Women in Sports Media and the Spartan Sports Report at MSU.