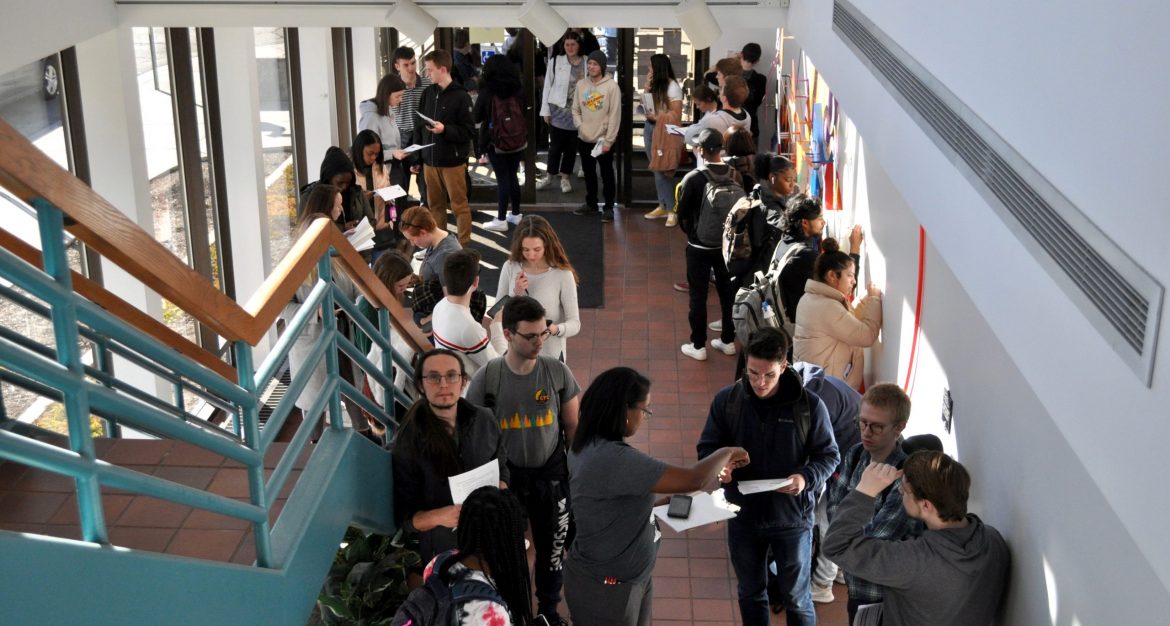 Changes approved in 2018, including same-day registration, made it easier for students to vote where they go to college but also contributed to longer lines. The wait inside East Lansing City Hall grew as primary day went on. Precinct workers sent voters to City Hall if they were not properly registered in East Lansing.

Former Vice President Joe Biden was projected to win today’s Michigan Democratic primary as the state tried out its new voting rules. Sen. Bernie Sanders, who found the 2016 Michigan primary to be a turning point against Hillary Clinton in 2016, saw his fortunes turn the opposite way in 2020.

Shelby Stanton, a junior at MSU studying supply chain management, said she was working for Sanders. She was asking students if they were registered to vote outside of the MSU Union, one of several campus polling sites.

“I’m proud to vote for Bernie Sanders,” Stanton said. “This allows me to exercise my right and as well as doing the most I possibly can to create change in this world.”

At the University United Methodist Church, at least 100 voters had turned up to the polling station by midday, precinct captain Barbara Ball-McClure said. Voting closes at 8 p.m., and voters in line by that time are permitted to cast a ballot.

East Lansing resident Henry James took a few minutes from his lunch time to vote. He said that he voted for Andrew Yang in the Democratic presidential primary. Yang dropped out of the race Feb. 12, but his name remained on the ballot in Michigan.

“I know he suspended his campaign. But I really like his Universal Basic Income program,” James said, adding that he will vote for whoever the Democratic nominee is in November’s general election.

Those who were able to vote without trouble at their precincts generally found short, fast lines.

LaRae Griggs, precinct captain at the voting site at the MSU Union, said she is excited about the turnout for today’s primary and can’t wait for the November election.

“We had three people at 7 a.m. At first it was a little dead, but it has picked up,” Griggs said. “We have had so many students coming in.

“We had to send to about 20 students to the city clerk’s office to register to vote, but they still get to vote today so that’s pretty cool.” At first, she said, voters were allowed to vote at City Hall, but as lines grew longer there, she said, some were sent back to the Union to vote.

City Hall became a bottleneck as the day went on.

Nicholas Nelson, 27, website developer, was at East Lansing City Hall with his fiancée and her friend. He said, “I voted in my precinct, but they have to sit here and wait for around a 3 ½-hour line. … I don’t enjoy it at all. I voted over at a church near Burcham Drive. They kept hand sanitizers there, they kept the stuff clean, they wore gloves and everything, so they’re keeping up with coronavirus stuff, as well.”

Isabelle Bradley, who voted at City Hall, said, “I registered with an on-campus recruiting group … the ones who walk around. And because I registered within 14 days of this election, they told me I needed to come to City Hall to actually be registered. … they gave me this registration application so I never was generally registered in the first place. I would say there’s a good 300 people in there, 350, everyone’s waiting in a line. And I asked someone how long he’s been waiting and he said two hours.”

Michigan Rep. Yousef Rabhi, D-Ann Arbor, stopped by City Hall and said, “it’s brand new for a lot of these clerks and I don’t think they’ve seen this amount of voter enthusiasm. I’m a big supporter of Bernie Sanders. I think that’s a big part of why college age folks are showing up to vote today. I think it shows we have a candidate who is inspiring young people to get out wait for hours in line to make their voices heard.”

But not everyone plans to vote in the primary. Michigan State University sophomore Thomas Jarecki said he doesn’t support any of the candidates who remain in the race.

“Everyone is very old running and there’s a lot of extremes on both side,” said Jarecki, who works in the IM-West building, which hosts a voting site for East Lansing. “We need someone that is younger and not as extreme.”

Rachel Page, chair of Precinct 8 polling location at Eastminster Presbyterian Church, said that by 1 p.m. the site had about 140 voters. There are about 1,000 registered voters in the precinct, she said. Page said some of the turnout can be attributed to an increase in absentee voting.

Page said turnout in the primary has outpaced the local election for city council last November.

East Lansing resident Nick Buechler, 22, said that he voted for Sanders. Buechler said he studied in a community college and believes that Sanders’ ideas would have helped students like him.

“If Bernie wins, I will actively participate in any political events to support him,” he said.

Kyle Webster, a nursing student at Michigan State University, was voting for Sanders.

“I think we just need the change and I’m going into a medical profession, and we need an overhaul of it,” Webster said. “Even if Bernie doesn’t get it I’m voting blue no matter who because it’s the best for everyone.”

Steven Burns, a bookstore owner, said he was voting for Joe Biden.

“He’s had a lot more experience at the national level than Sanders, and he’s always been a Democrat,” Burns said. “The one thing that bothers me about Sanders is that he’s only a Democrat when it’s convenient for him. He doesn’t have the courage to run on his own Independent or Socialist ticket.”

Josephine Goedert, a nurse, was sitting in one of the chairs inside the voting area Tuesday afternoon. Goedert said she was still undecided.

“My main concern is security. The United States is a country of security and worldwide security,” Goedert said. “We need someone who can be able to bring all of the communities, and be able to negotiate and work on world peace. If there is no peace there is no progress.”

There were also property tax renewals on the ballot, including to support the Potter Park Zoo, recreational trails around Lansing and health care services.

Burns said he voted for all of them.

“I think quality of life issues are really important, and I think that’s part of the reason why a lot of people choose to live around here,” Burns said. “There’s all of these services, if I wanted to live in a place where there was nothing, I would live there, but I choose to live here.”

Robert Ulrich, a retired teacher and a principal, ran the voter precinct at the Martin Luther Chapel. He said even though the city often leans Democratic, volunteers at the precinct included Republicans and Democrats.

“You have to have both to make it fair here.” he said.

Tasia Bass is a comedic writer and artist. After graduating law school, she realized that her heart wasn't in going to court, but in telling stories. So ignoring the ashamed looks in her parents eye, Tasia decided to go back to college to receive her masters in journalism, with a desire to combine her passions of comedy, law, and writing. She will one day win an Emmy for Outstanding Writing for a Variety Series.

Indri Maulidar is a graduate student at the School of Journalism, specializing in science and environmental journalism. She is a Fulbright scholar from Indonesia where she started her career as a young journalist primarily covering politics, political corruption, and national policy.

Chloe West is a sophomore at Michigan State University studying Journalism and Public Relations. She writes for VIM Magazine under the Health and Beauty team.

Debrah Miszak is a junior studying journalism and comparative cultures and politics at Michigan State University.