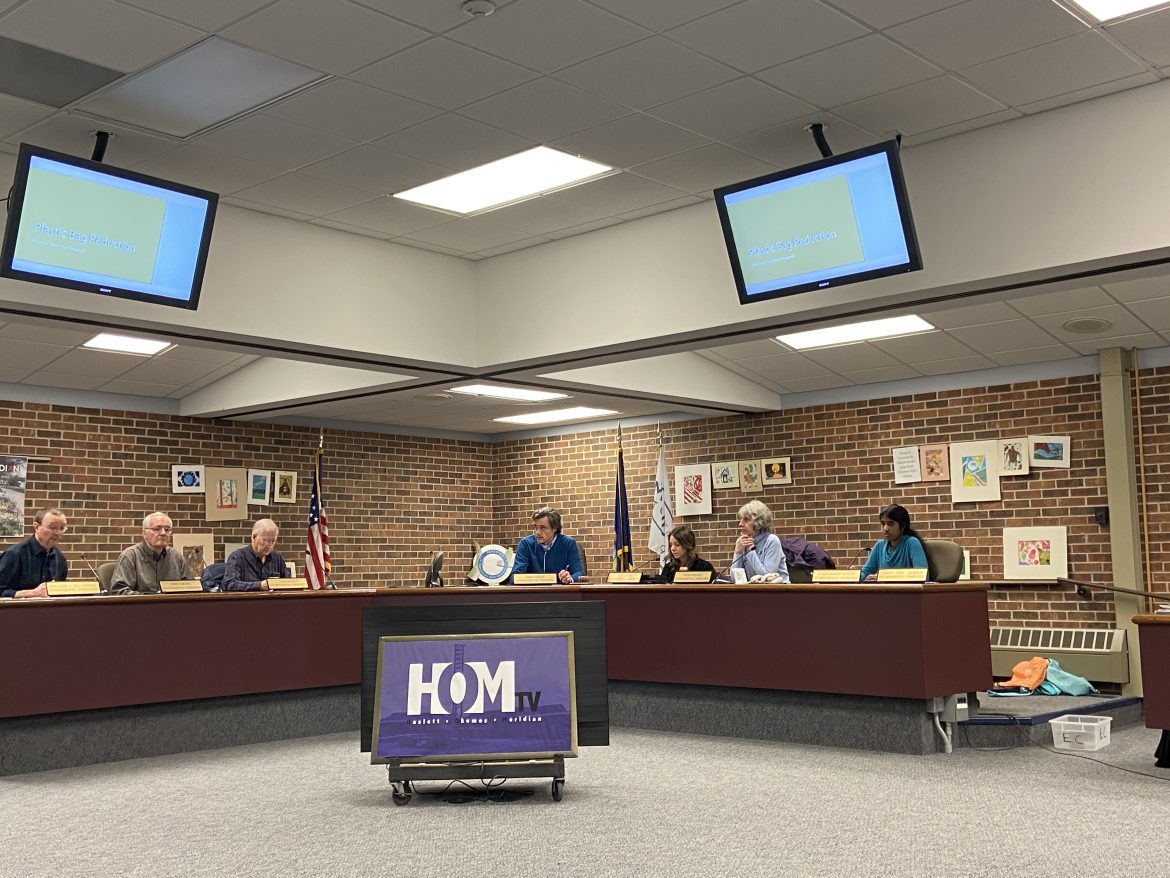 Meridian Township Environmental Commission Board at meeting on Wednesday February 5, 2020.

Meridian Township Environmental Commission members meet in city hall where it is broadcasted by HOMTV.

Courtney Wisinski presents her proposal for a plastic-free township to the environmental commission.

Fill out a survey to see how you contribute to plastic bag use:

Meridian Township Trustee Courtney Wisinski and her high school-aged son are on a mission to have a plastic-free township, and they just may get it.

“I’m looking forward to seeing how this unfolds,” said Harvey. “I really appreciate all the thought, research and focus that Courtney and her son have put into this … I’ve learned a lot.  I’m encouraged by a bill that “bans bans” — overriding special interest groups’ efforts in the other direction.”

According to Wisinski’s research, 10,000 tons of plastic are found in the Great Lakes annually. This leads to her belief that the use of plastic grocery bags and their harmful effects could be a greater risk to not only the State of Michigan’s citizens but also their beloved waterfronts.

Okemos Action Captain for Eco-friendliness, Aparna Krishnamurthy, is a junior at Okemos High School and also serves as a member of the Meridian Green Team. Krishnamurthy mentioned her thoughts on Wisinski’s proposal and said she is surprised by the bans she sees here in the United States.

“My entire extended family lives in India,” said Krishnamurthy. “China and India have completely banned plastic bags … the reusable bags there are working really well. That was shocking to me, if they can get a program together to successfully ban plastic bags I think if we put a little more effort to think about doing that.”

Wisinski has been a township trustee since January 2019 and knows things take time, but she is staying optimistic that both her and her son will see changes in the near future.

“I feel like we can move forward,” said Wisinksi. “I think there’s a lot of preparatory work still. So do I think it will move forward fast? Probably not but I’m okay with that. So we’ll put in the work so that we are thinking about all stakeholders and how that might affect them. I want to be very conscious of that; we’re not putting ownership on businesses you know, does it go back to the public? Let’s work as a team.”

The discussion has begun among the board, and while these are the first steps toward making the topic known on a higher level with other officials, Wisinski feels that at this time, the most important thing is to address the issue in the correct way for the township and its residents.

You can locate the Environmental Commission Meeting Schedule on Meridian Township’s website, along with other Township Board meetings dates and times throughout the month.