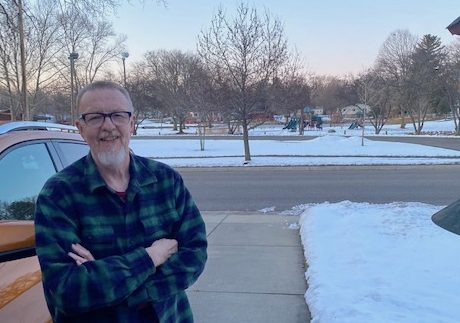 Roger Bauer appreciates Laylan Park, which attracted him to buy his home.

For two years, the City of Mason has gathered input from citizens regarding parks and recreation improvement projects, and now it is ready to put them into action.

The city offered an online survey and information about the plan through its Facebook page, email and notices in the Ingham County Community News. On Jan. 14, the Planning Commission recommended the plan be adopted by the City Council.

Deborah Stuart, Mason City Manager, said, “If you are applying for money from the Department of Natural Resources, you have to have a parks study, but that’s not the reason we wanted to do this parks study. We wanted to do it differently than we’ve ever done it before, which was we really wanted a community engagement process.”

Roger Bauer lives across the street from Laylin Park, and has for 40 years. “The reason I bought the house, originally, is because of the view out the front window,” Bauer said. “I had this beautiful park with these beautiful ponds.”

Bauer said he took part in the study and Laylan Park is already undergoing changes based on community input gathered in 2017. For example, he said the city has already added a couple of platforms above the park’s two ponds that many use for catch-and-release fishing.

Elizabeth Hude, the city’s community development director, said the city achieved a 8.75% return rate on the survey. “You’re lucky if you get 1-3% normally, so we were very happy about that.”

Hude said that she and city officials were surprised by some of the feedback. The plan now includes converting some public tennis courts into pickleball courts because it seems to be a more popular sport than tennis nowadays.

Stuart said, “The result was a study that really kind of does an assessment of everything that’s in our current parks. Where the challenges are, what’s not ADA accessible, what are some immediate things we need to fix.” Stuart said the plan covers parks as well as non-motorized pathways, wayfinding and signage.

Hude said, “Our goal is to try and keep the tax burden on our community very low, as low as possible, so we wanted to be very sensitive to the cost of the different improvements.”

Hude said the outreach helped the city discover some of the roles that the community groups fill in relation to parks and recreation. For example, the Sycamore Garden Club at Bicentennial Park, a state and nationally recognized nonprofit youth gardening program, is instrumental in gardening throughout the city. She also said sports groups that use city-owned parks and recreation facilities put forth major efforts to helping the city maintain their facilities.

“After sitting down and talking to them, we understood their role and how they coordinate to maintain our facilities. It’s a big help to us,” Hude said.

Moving forward, Hude said the plan doesn’t “become real” until approved by both the DNR and the city. She said once the DNR approves it, citizens can stay up to date via social media channels and the dedicated park plan page.

For more information visit the page at www.surveymason.com.