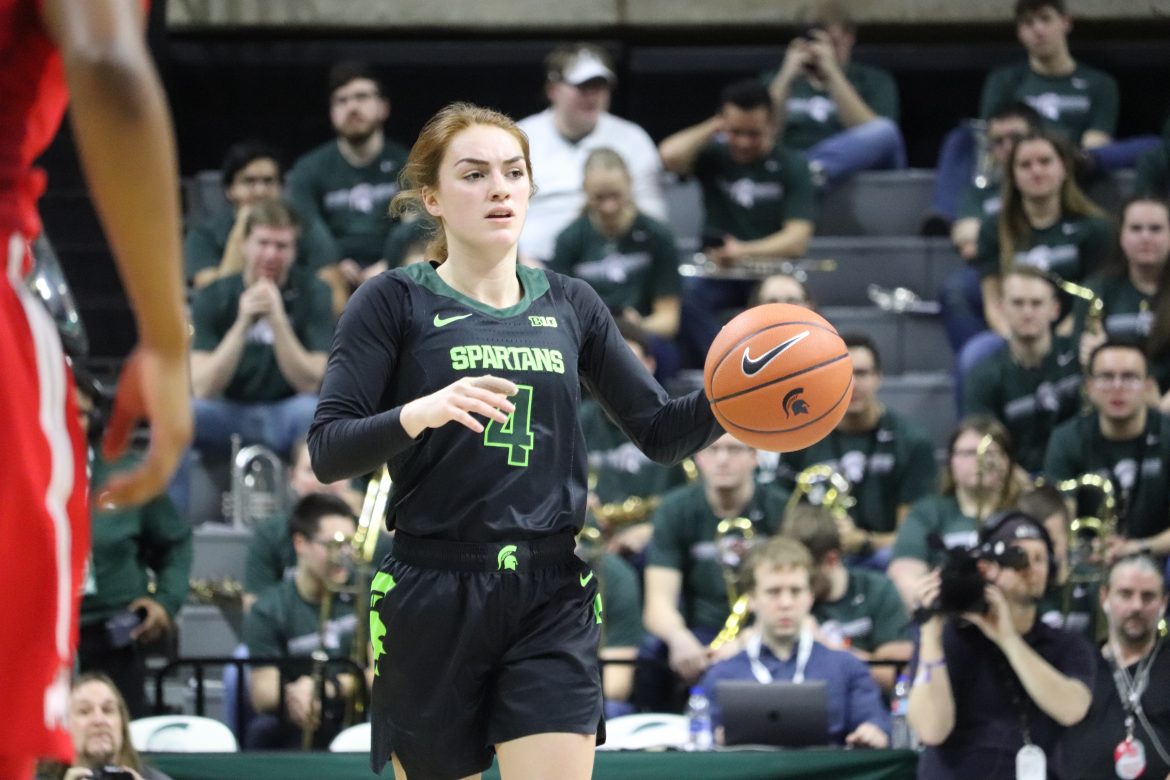 The death of basketball legend Kobe Bryant on Jan. 26 shook the hoops community to its core. Even though the five-time NBA champion is best known for his feats in men’s basketball, his loss also t devastated the women’s sports world, a community for which he was a lifelong advocate.

On the campus of Michigan State university, the women’s basketball team, a group comprised of many lifelong Bryant fans, is saddened.

“It’s very sad, it’s almost surreal, especially as a parent of two daughters,” assistant coach Maria Fantanarosa said. “He was the most high profile supporter of the women’s game. And I don’t think that’s because he had four daughters, I think that was because he was a very visionary guy. He appreciated the quality of the game.”

Bryant, who passed away with his 13-year-old daughter Giana and seven others, was in a helicopter crash in Calabasas, California, on the way to a basketball tournament. He made the All-Star team 18 times and has an NBA Most Valuable Player award, but in the women’s basketball community, he may be best known as its greatest supporter.

“He was the biggest advocate out of anybody,” sophomore guard Nia Clouden said. “I saw him at a bunch of women’s college games and WNBA games supporting female athletes. With him being gone, everyone else has to fill in his shoes for him.”

“He was able to see the big picture and the importance of the women being equal with the men,” Fantanarosa said. “Players like Kobe, parents like Kobe, when they speak, it’s contagious. Every guy that was in the gym heard him.”

For senior point guard and emotional leader Taryn McCutcheon, Bryant served as an inspirational force, even though it didn’t start out that way.

“When I was younger, I was actually not a fan of his because he just carried himself so differently,” McCutcheon said. “Now, being older, I look back at that and realize that I aspire to be like that. I want to be able to look back and say that I made an impact like Kobe did.

“Michael Jordan and Kobe Bryant are two people who I will always respect tremendously because of how hard they worked and how much they loved the game. Even if you’re not a Kobe Bryant fan, he will always impact you in that way.”

McCutcheon strives for Bryant’s tireless work ethic, saying she has to considering her 5-foot-5 frame must compete in the Big Ten conference.

“He deserves everything that he got,” McCutcheon said on Bryant’s work ethic. “I definitely try to bring that into my game because that’s something you can control. I try to outwork everybody, honestly I have to because of my size. Looking up to someone like Kobe inspires me to do that.”

McCutcheon believes his relationship with his daughter Giana is where she connects with the future Hall-of-Famer the most.

“To me, that is the most unbelievable part about him,” McCutcheon said about his relationship with Giana. “My dad and I had a really close relationship, and growing up he worked me out like Kobe did with his daughter Giana. Seeing that really brought me back to the days when my dad and I would go everywhere together.”

Bryant’s relationship with Giana has brought pride to all fathers who call themselves “girl dads,” and highlights  the sacred bond that a father shares with his daughter.

“That’s what hit me hardest, to see him and his daughter,” McCutcheon said. “But honestly I think it’s best that they went together because having each other was the best thing that could’ve happened to them. I know that would be the same with me and my dad. I would’ve needed comfort from my dad in that situation.”

To many, Bryant was the ultimate family man in the years following his retirement. He was frequently seen in public with his wife, Vanessa, and their  daughters Giana, Natalia, Bianka and Capri. He was the epitome of a “girl dad” according to McCutcheon.

“For him to bring her (Giana) everywhere, he was outwardly a very family man,” McCutcheon said. “He wasn’t doing it behind closed doors. That was the most respectable thing you could do for a woman, and for your family and for your daughters.

“He showed them off to the world, and he gave them the best experience they could have when he could’ve just lived it up himself. It breaks my heart that they went so early, but they had each other.”

Like many basketball players in the men’s and women’s ranks, Clouden and Hollie have donned the number 24 on their jerseys in honor of Bryant, who wore 24 from 2006 until his retirement in 2016.

“He has always been my favorite player, I wear number 24 because I idolized him,” Clouden said. “It’s really hard knowing that he and his daughter, and everyone on board, passed away. He meant a lot to me personally.”

“I wore number 24 all through high school and middle school, that man shaped the game of basketball for me,” Hollie said. “He was the Michael Jordan of our generation. Kobe Bryant was huge for both men’s and women’s basketball.”

McCutcheon said his death has affected the entire team.

“It’s had a huge impact on us. Anyone in basketball or anyone who knows his name is going to be impacted in some way because that’s how big he was. He was going to do so much more, but he did more than enough.”

As the women’s basketball community continues to mourn the loss of Bryant, its players will continue to draw motivation from a man whose advocacy for women’s sports will last far beyond his life.

“What he was doing after retirement with his daughter was the most heartbreaking thing,”  Hollie said. “Kobe got to attack the world the way he did, but his daughter had so much promise. What he did for women’s sports was amazing, it’s really sad that he passed.”

“We need to play for him and be motivated by him, that’s the best we can do,” McCutcheon said.