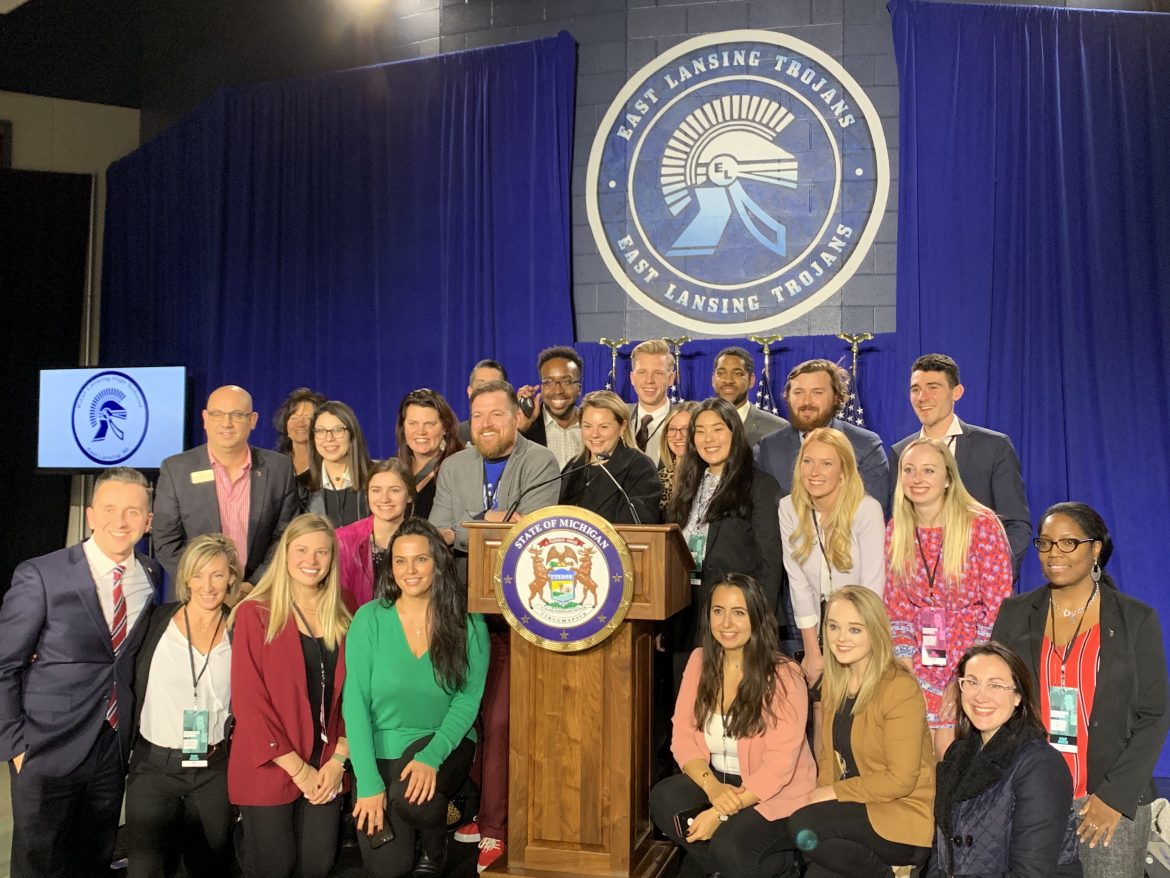 East Lansing High School students and staff pose for a photo Tuesday. Michigan Gov. Gretchen Whitmer delivered a Democratic response to the State of the Union address from the school.

With networks broadcasting across the country from the school cafeteria, Whitmer used her 10 minutes not to counter Trump’s 78 minutes, but to talk about fellow Democrats’ actions. Her response echoed her own State of the State address six days ago, when she featured a 12-year-old boy who took it upon himself to patch potholes on his street.

East Lansing High School students talk about their school’s moment in the national spotlight and the 2020 election.

“Unfortunately I will not be able to vote, but if I could, I would definitely lean toward the left, the Democratic party,” said Chakong Yang. “I’m supporting them out there because I believe that, one, women should be able to take care of their own bodies. That’s just where I fall as a person.”

And what about having the response to the State of the Union rebuttal happen at his school? “Honestly I think it’s really cool, it’s a one-time opportunity and I’m really glad I was able to attend and get to experience it for myself.”

“It’s really crazy, it’s crazy that our governor was the Democrat chosen to respond to it and it’s really amazing that she chose our school to have that response at,” said Mexica Torrez-Miner. “I actually will be able to vote, which is super exciting and also democratic so that’s really good.”

Livi Novello described herself as definitely Democratic. “I can’t vote in the primaries so, you know, hopefully we will get a good candidate for the 2020 election.” She said it was amazing to have the governor at her high school. “Once we found out, like, literally yesterday, I think, we just did everything we could to come. I’m really glad we had the opportunity. It’s kind of surreal that it’s only been 100 years that women have had this right and we take it such for granted, but it’s amazing to be able to finally have the right.”

“I have watched every single one of the debates,” said Ella Stout, “and, yeah, definitely Democrat all the way. When we found that out, we did anything we could to be able to come to this, it was so cool, I was so excited. I’ve definitely considered myself to be, hopefully later in life more politically involved, so this was this was like super exciting for us to be able to witness this, it’s such a big moment.”

“I think that it was a great move on her side. I think that was a great way for her to show her stance.” With 2020 being the centennial of women’s suffrage, Mariah McCinton-El said. “I feel like we’re getting places with this and even though it’s been 100 years, there’s still a lot more things to go and I just feel like we’ve come a very long way and it’s just like, I’m happy to be a woman.”

“She’s passionate about everything she says. I don’t even know if there was one particular concern — just the best action we can take for Michiganders and really motivating the student body and young people to keep their voices heard, motivation.”

“I was left motivated because we are the youth that she’s talking about. We are the next generation of voters and people that have the most influence on policies to come, and that really just spoke to me and everyone around me … We are just so motivated and inspired by the people in positions of power that have faith in us and our future. … I sat next to (Whitmer’s daughter) Sherry last year in calculus and she was always really kind and sweet. They’re super sweet. They’re good girls.”

I thought it was a good rebuttal, but I thought it could’ve been a little bit longer because there were so many things that he said that she could’ve rebutted. But, I mean, the points that she did make were very impactful. It was pretty much like, saying that we are one as a nation and that just because somebody wants us to be divided doesn’t mean that we have to be. And then when we are together, nobody can stop us as America. And that’s been shown throughout history.”

Ben Buzzell is a journalism major at Michigan State University. He plans to graduate in the spring of 2022. Ben creates multi-media stories and reports. He is an executive producer for the award-winning weekly news show Spartan Sports Report. He hopes to expand his network and share people's stories.

Michael Hrit is a journalism student at Michigan State University. He is pursuing a minor in sports journalism and in economics. He plans to graduate in the spring of 2021. He works with the award-winning Spartan Sports Report to create videos about various sports on campus. He is working towards becoming a sports writer.