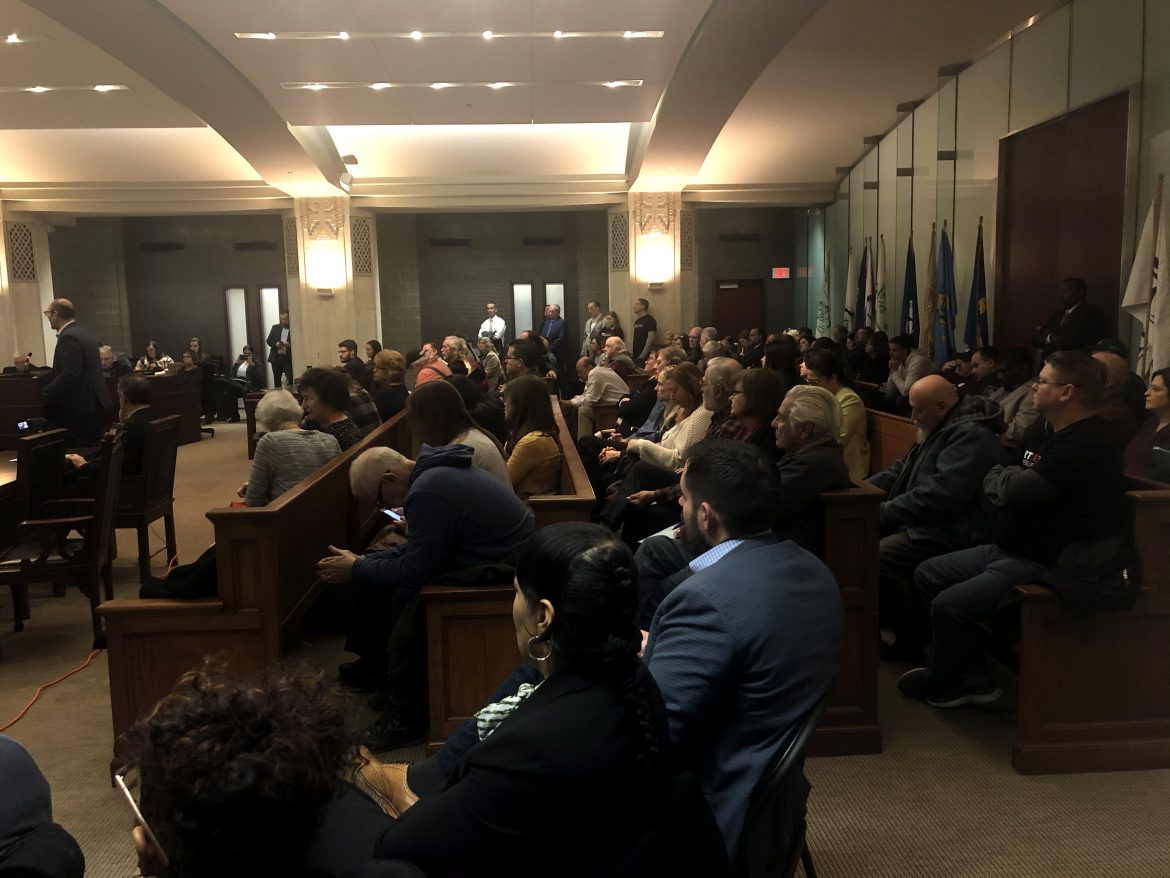 Community members fill the chambers at the commissioner meeting in Detroit on Nov. 26.

On Dec. 5, Wayne County commissioners voted to approve the sales of two mills in Hines Park.

This decision was made after community involvement and several meetings held over the past year by both supporters and those against the sale.

Community members and commissioners had the opportunity to share their opinions concerning the sales of the mills during the Nov. 26 commission meeting.

From the 48 community members who spoke, 23 people supported the sale and 25 opposed the sale. Arguments were made by both sides.

Prior to the commission meeting, a group named Save Hines Park, who is against the sale, held an informational meeting about the county’s plans to sell two mills in the parks on Nov. 18.

The Wilcox Mill, located in Plymouth, Michigan already has a buyer with a plan for the mill, which was mentioned by many of the people who support the sale.

The county wants to sell the mill to artist Tony Roko who plans to transform the mill into a non-profit art education center.

The pros of the art foundation that were discussed included giving opportunities for at-risk youth.

“This is a golden opportunity,” said John Goci, a Wayne County resident who supports the sale of the mill.

During their statements, supporters of the sale described the Wilcox mill as dangerous, an eyesore and dilapidated.

“This is an amazing opportunity,” Goci said. “Nothing will be done with that property if you don’t do it this time around.”

“This partnership is the way to go that way this land is protected, and it will always be there and reserved the way it was brought up,” said Bob Ralko, a Wayne County resident against the sale of the mill.

By leasing the mill, the county would still be in control of the property, and the art foundation could go into the building through a public-private partnership. Save Hines Park calls this a win-win plan.

Darga said the plan would be a public-private partnership where the county has access to funding and can help with the cost of upkeep on the property of long-term leases. This allows the developer to make money while benefitting the community.

Opponents said that it is morally wrong to sell land that belongs to the public. They are also concerned about who could own the building in the future. If it is completely sold off, community members are concerned about what it could turn into if the art foundation ever sold the building.

Supporters did say that there would be a right to refusal in the contract that would allow the county to approve or deny a sale in the future if the mills were to be sold again.

“I think the county can do better, and you should too,” Smiley said.

Commission members also had the opportunity to share their opinions prior to voting.

Commissioner Diane Webb expressed how she would be voting at the Save Hines Park meeting and at the commission meeting.

“If you don’t already, you know you have my vote,” Webb said at the Save Hines Park meeting. “I never supported it and I still don’t.”

Along with Webb, Commissioner Tim Killeen was also against the sale of the mills and wanted more conversations on other options of what could be done with the mills.

“I encourage my colleagues to say no to the proposal before us,” Killeen said.