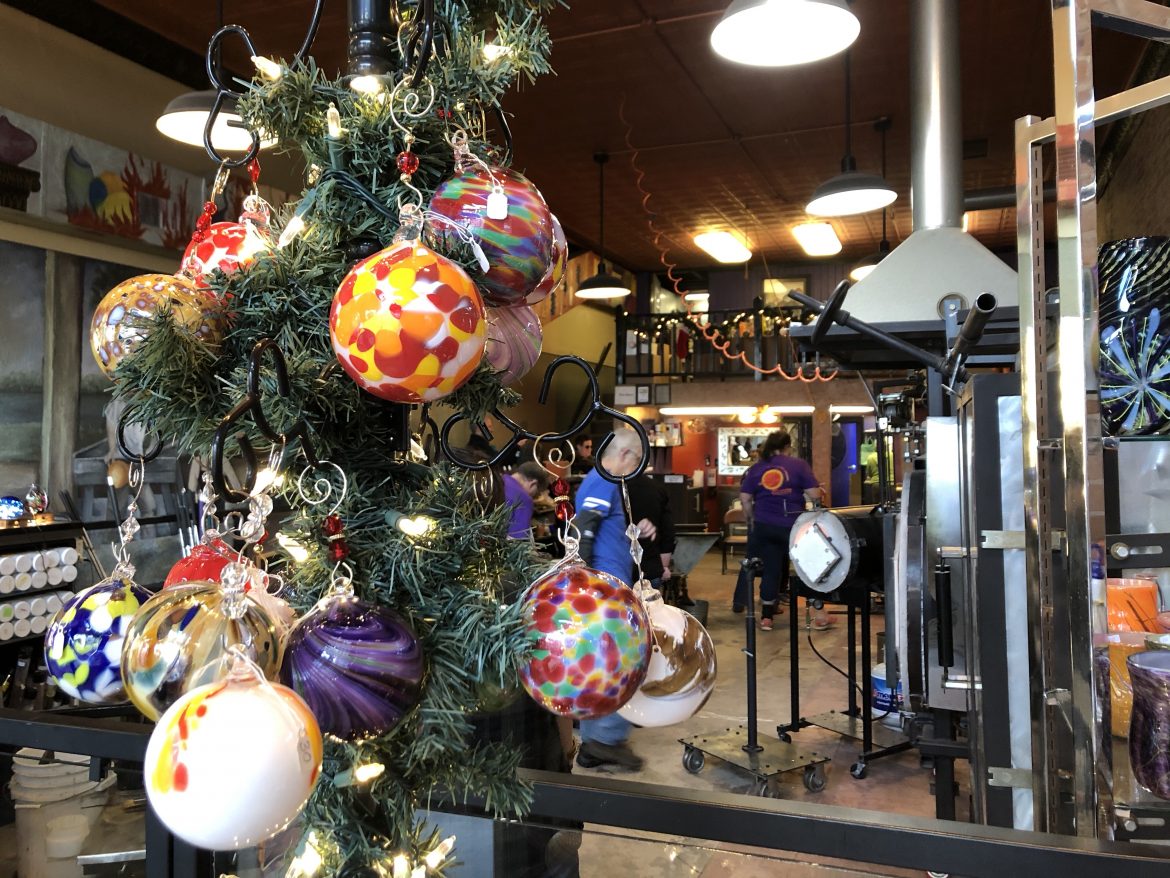 Ornaments made by Fireworks employees hang from a Christmas tree. Photo by Claire Heise.

Upon arriving to the seemingly small store on 119 S. Putnam St. in Williamston, regulars and newcomers are greeted with a blast of hot air to the face. Past all sorts of decorative items like vases, plates, Christmas ornaments and bowls is the cause of all that heat; four furnaces, some of them with a core temperature of 950 to 2,000 degrees.

This was the image that owner Dave Porter imagined when he opened Fireworks Glass Studio on Sept. 21, 2007 in what used to be an old candy store. Growing up, Porter’s father was a chemist, and a trip to his work one day some 50 years ago is what got him hooked on his lifelong passion.

“I was 12 years old, I saw a man where my father works and saw him blowing glass and I was captivated and decided I had to do it,” said Porter.

To make the space a functioning glassblowing studio, Porter had to gut the building. Ensuring the building could handle the heat meant adding solid, thicker floors, ceilings and walls. Then came the installation of furnaces and gas lines.

Along with its annex store next door, which sells products made in-house by the Fireworks employees, they hold monthly paperweight workshops in the studio for $58.

“It’s very physical,” said Firework employee and head gaffer, Rhonda Baker. “You’re in tune with your emotions and it’s very relaxing. When you’re working with 2,000 degree glass, you’re not worried about paying your bills or car repairs or your taxes, you’re in the moment. That’s a very rare thing in life.”

The team said a paperweight is a good start for beginners, since it’s not as hard to mess up, so with the five employees giving their expertise to the three practicing gaffers, anyone can make them.

David Benner and his wife, Virginia, are frequent attendees of the workshop. Benner recalled a story a few years ago when the family lost their dog, Annie. Virginia brought some of the dogs’ ashes to the workshop, not even sure if they could be used in a piece.

“She was my boating buddy,” said Benner. “Virginia brought the ashes and was able to incorporate them into a paperweight. She used some shades of blue that looked like the water and the ashes took on a star-like look. I didn’t know they could do that, it was a beautiful gift to get.”

Fireworks also contributes to local charities like Relay For Life, and its hosting its biggest fundraiser of the year on Dec. 1 for the Williamston Food Bank and the Ingham County Animal Shelter, where half of all proceeds raised will go to the causes.

Aside from donating, Fireworks also created its own charity with the Hold Onto Hope vases, a tradition that started a decade ago with the sole intent of helping Williamston residents. By purchasing a vase, 50% of the proceeds go to local family affected by cancer.

“They get something beautiful and you’re able to help out a cause,” said Tekla Balmer, a glassblower at the company since 2013.

“If someone comes in and asks I generally will say yes,” said Porter when asked about charity suggestions, “If something tugs at my heartstrings, that’s what I’ll do. If I hear about someone who needs help, I’m going to try and help them.”