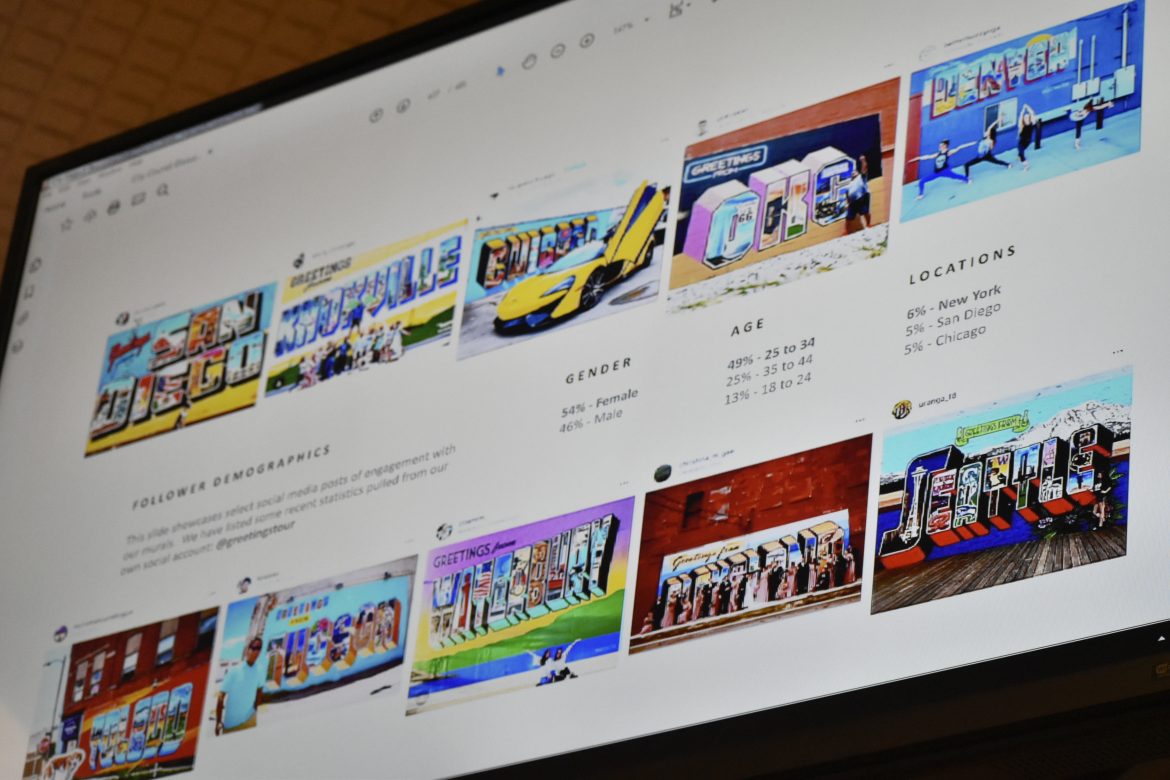 Wendy Longpre presents details of a proposal to commission the creation of a new greetings card style mural to the East Lansing City Council on Oct. 22, 2019.

East Lansing may become the latest in a string of cities to commission the creation of a mural designed to attract tourists if a proposal from the Arts Commission is approved.

The mural, which would be part of the national Greetings Tour, would feature a postcard-like design using classic lettering, bright colors and depictions of the city’s icons.

So far, 41 Greetings Tour murals have been installed in 20 states.

Wendy Longpre, assistant director of the East Lansing Parks, Recreation and Arts Department, said the murals have a following of their own and could increase traffic to the city.

“Once you found one of these murals you kind of look for them, then, as you’re traveling,” Longpre said.

Billy Craven, the founder of Chicago art gallery Galerie F, said that the mural in the windy city has been a resounding success.

“On any given day, you can find fans lined up to shoot their wedding, modeling or graduation photos. The mural attracts people from across Chicagoland and statewide, as well as tourists from all corners of the globe,” Craven said.

Jonathan Santino, the owner of Uncle Tony’s Donut Shoppe in Orlando, said that the murals bring additional business to his shop.

“We really have noticed a significant increase in people visiting the mural, which almost always results in fresh new faces through the door,” Santino said. “The mural has made our shop a landmark and almost everybody knows our business, as well as surrounding businesses because of the Greetings from Orlando mural.”

The mural would cost more than $27,000 and would replace the Narwhal mural on the Roadhouse Pub.

Longpre said other spaces were considered, including the Hannah Community Center, but did not meet the criteria they were looking for, which includes the size of the wall, the color and texture of the wall, the elevation of the mural, and the space available to move around and take pictures with the mural in the background.

“This particular location really ticks all of those boxes. It meets those various requirements,” Longpre said.

Another possibility would be building a separate structure in a public park, but that would lead to extra costs.

If approved, work on the mural is expected to begin as soon as the spring and would be completed by early summer.

Andrew Roth is a junior studying journalism and political science at Michigan State University. He covers politics and policy as a freelance journalist and has been published in the Michigan Advance and Flint Beat.