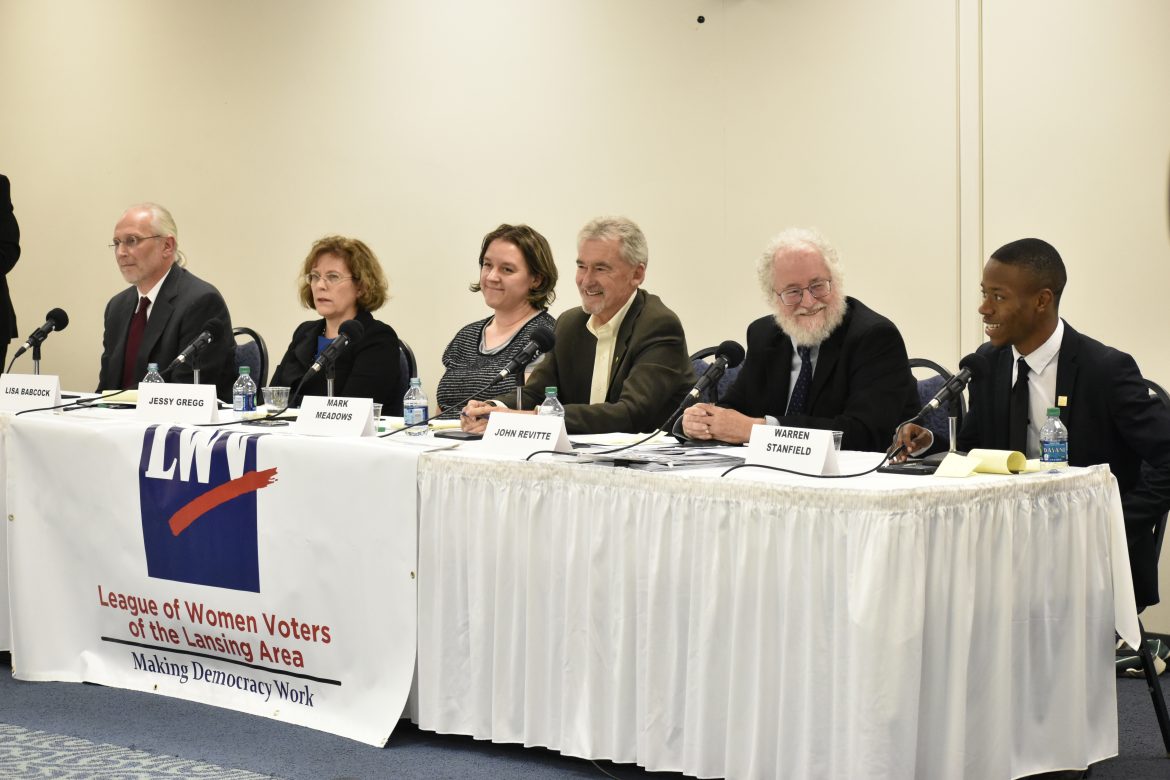 East Lansing City Council candidates speak at a forum at the Hannah Community Center on Oct. 3.

Candidates for East Lansing City Council shared their plans for strengthening relations between the city and Michigan State University during a candidate forum at the Hannah Community Center on Oct. 3. Six candidates, including two incumbents, are running to fill three seats in the Nov. 5 general election.

Here’s what each candidate had to say:

“We’ve had some difficult patches. I had the distinct and dubious honor of earning a law degree from Michigan State University only months later to see my alma mater on CNN for burning police cars. That wasn’t really good for job hunting, but nevertheless she persisted.

“One thing I certainly will not do is stalk out of a meeting with the university president when we’re trying to negotiate things. I think that’s highly inappropriate and that signals our need for change.”

“My current association with the university comes primarily through collaborative projects that come through the Arts Commission. So, speaking to the way that we built those relationships, I would say that approaching MSU not just from the top down but from the perspective of working with individual departments on projects that their students are engaged in.

“We’ve benefited from a program called the citizen scholars program that encourages MSU students to work within the community and find community development projects to work with. The ones that I’ve been engaged with have been artistic because I’ve come through the Arts Commission, but I believe that there’s other programs like that in other university departments.

“If we can find ways to integrate town life with gown life throughout the university and not just from the top down, I think they will start to see us more as partners as opposed to a conflictual relationship.”

“One, my job as grievance official meant that I’ve dealt with deans, directors and chairs across campus and a lot of time was in the Admin Building. They would say ‘you’re going to the fourth floor today?’ and I would say ‘yep.’

“I think we have a real opportunity with the new leadership at the university. I’m holding the new president’s letter of Aug. 23 where he says I’m impressed by the cooperation I see between MSU and your neighboring communities, our partners and East Lansing, we can help work together to connect trails to safely accommodate bikes and e-scooters. So I think there’s some real opportunity with new leadership at the university.

“One of my suggestions was taking the time from the human resources area. You want to find out what other similar communities – or, in labor relations, other unions or other employees – are doing and benefits or other things. Maybe we can do a better job of finding out how our other university towns are working with their university. So, I’d like to help in that kind of area.

“I also understand, I’ve heard Mark say that number a couple times and I’m impressed that we do that much but I still wonder do we really take advantage of the expertise of some of MSU? Because I think some of the kind of issues we have, there’s probably some people that study that or done things and I sometimes wonder.”

“I go to Michigan State University.

“I went to Michigan State University when Richard Spencer, the alt-right extremist, came to campus, and I protested that.

“You may know people at Michigan State University, but I am a Spartan. I can speak to our issues better than I know you can.”

“I agree with John that we have a huge opportunity now in the leadership at MSU to engage on a bunch of shared policy goals, and I want to talk about some of those goals. The key point is that they’re shared, they’re good for us and they’re good for MSU, and that’s how we’re going to engage with MSU.

“MSU is this huge engine of applied research and there is no reason that we shouldn’t be commercializing more of that research right here in our downtown instead of, often, some industrial park somewhere. It would be as convenient as it gets for the faculty there because they could walk across, talk to their employees, walk back and talk to their grad students within a couple of minutes. It would be good for them and it would be good for us.

“I think it’s also time to encourage MSU to re-establish a lifelong learning program where faculty teach people in the community and carry on classes that are community-based classes, because we have a vital, dynamic, prime-time program here and I think they would really benefit from it. And MSU faculty could put those outreach courses on their vitas, which is what counts for faculty.

“So. I think the way forward is to engage on shared policy goals that add to the environment, that add to East Lansing and that make improvements for MSU at the same time.”

Andrew Roth is a junior studying journalism and political science at Michigan State University. He covers politics and policy as a freelance journalist and has been published in the Michigan Advance and Flint Beat.