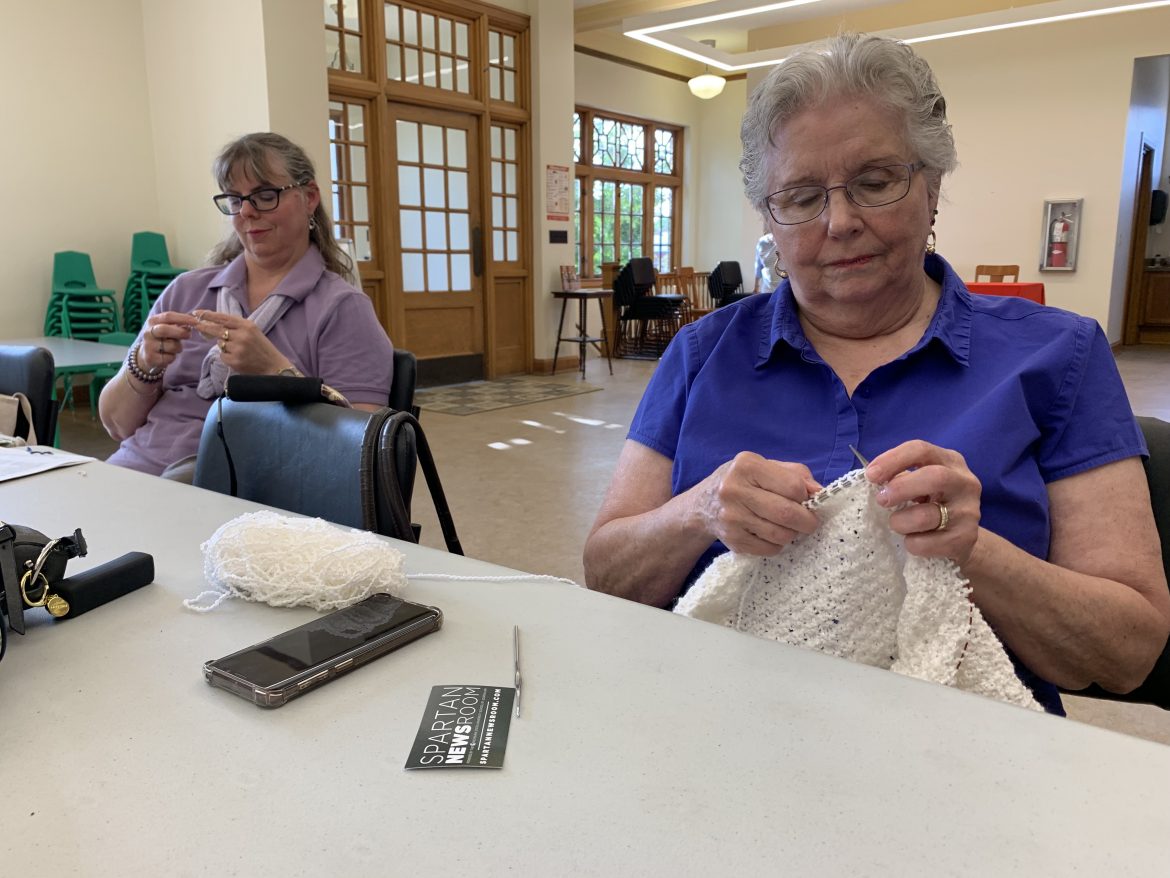 Grand Ledge area women meet to knit as part of the Crafting with a Cause group. They work on items such as blankets for those in need.

On the first and third Thursday of every month, a group of about 10 to 12 women meet at the Grand Ledge Area Public Library to make a difference.

Cheryl Mulder started Crafting for a Cause in fall 2016 as a way to give back to the Grand Ledge area, and to meet members of the community.

Group members spend their time around a large table knitting and talking with one another. They started off making hats and other items. Their finished products go to multiple area charities.

One of those charities is the Grand Ledge Food and Clothing Pantry, where Mulder is the donation coordinator. She handles the household items that get donated. The pantry is run through the Grand Ledge Seventh Day Adventist Church.

The group’s donated goods also go to Hannah’s House, an organization in Lansing that gives food and shelter to pregnant women who are homeless. Women can stay for free at Hannah’s House during their pregnancy and up to six months afterward.

In addition to hats, these ladies also make sweaters, afghans and toys for local charities.

When Crafting for a Cause was founded, the group started with three members.  The group now averages about 10 people each meeting.

One of the volunteers, Kathy Ockert, who used to be a member of multiple knitting groups in the area, and decided to join Crafting with a Cause to do something different and give back to her community. She said the comradery was also a highlight of the group.

Kay Taylor, a widow, who is also retired said she needed service in her life. The group allows her to do just that with a close group of friends.

The group may be focused on how it can help the community, but members’ bonds with each other is something special.

During their knitting session, they talked back and forth and had conversations that went from light-hearted topics to serious community issues.

The group currently has no men involved, but Mulder says members would  love to have anyone who is interested to join the group. No knitting skills are required. Many of the members help teach other members how to knit.

“It’s service where I don’t have to think,” said Michelle Lawson, one of the members.

Connor is a broadcast journalism major at MSU. He's began his career in broadcasting at a radio station when he was 14. He enjoys the kayaking and paddleboarding in his free time.