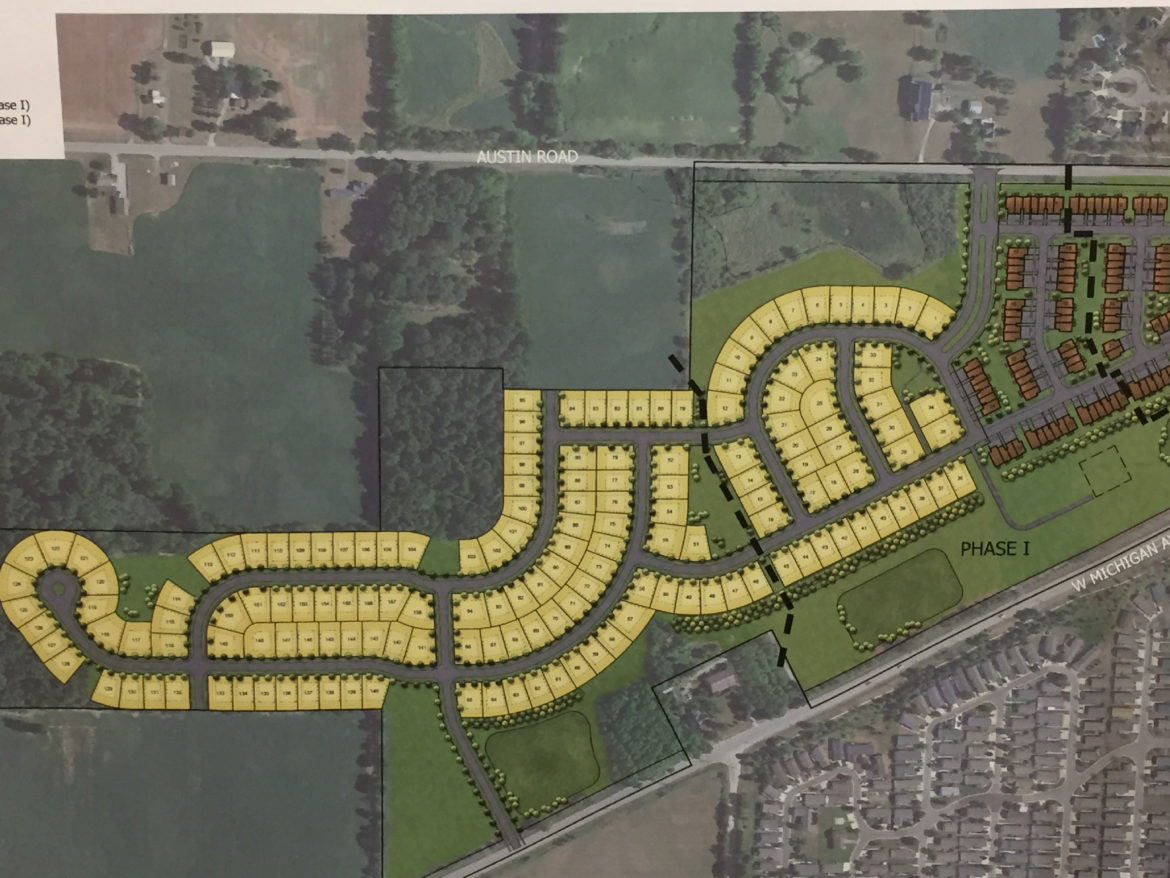 Projection of the location of Andelina Farms, between Austin Road and Michigan Avenue in Saline Township.

Saline Mayor Brian Marl wants nothing more than to see his city thrive. That’s why managing growth is vital.

But managing growth on Saline’s west side is proving logistically and financially challenging for the city’s government.

Developer MI Homes is putting in a subdivision named Andelina Farms in the eastern part of Saline Township. The subdivision will border the city on the city’s west side between Austin Road and Michigan Avenue.

Saline Mayor Brian Marl said that ideally, Saline would annex the development into the city limits, but there is currently no city funds available to extend water and sewer services to the nearly 300-unit subdivision.

“From my perspective, water and sewer are the main sticking points,” Marl said. “We’re trying to figure out how we can get city utilities to that site and beyond.”

To complicate matters, MI Homes was given permission by Michigan’s state government to put in a private wastewater treatment plant that would discharge into a nearby tributary of the Saline river, a decision which the city is currently appealing, according to Marl.

He said that he does not believe private wastewater treatment plants are in the best interest of any of the surrounding residents.

“Not having boots on the ground on a regular basis at a private plant can have a host of issues,” he said. “At our wastewater treatment plants in the city, we have highly trained professionals there working full-time.

“Cities provide better vigilance at these plants. And it goes beyond just pollution. The city’s goal is to advocate and act to prevent projects that will adversely affect the community. We strive for a standard of excellence as it related to all developments.”

Saline Mayor Pro-Tem Linda TerHaar echoed Marl’s concerns, but said she’s optimistic that even if the city’s appeal is denied and the private treatment plant is built, that it’s built and maintained responsibly, and that it doesn’t end the city’s desire to expand its western borders.

“If the treatment plan does go in, I’m still interested in pursuing avenues of city growth,” TerHaar said. “I’d like to have some sense that it’s being done well and that they’re being careful.”

Both Marl and TerHaar see beyond the water and sewer problem to the big-picture issue of how the city manages growth, which Marl said a city must do to thrive.

“Cities either grow at a manageable pace or they languish and start to fall behind,” Marl said. “It’s just what naturally happens, but it needs to happen in a strategic and planned manner.”

TerHaar said she agrees with the mayor, and provided some additional insight.

“One of the things I’ve learned from being on city council is, you can get really caught up in details when you want to keep your vision in line of where you want things to go big picture, but it’s sometimes hard to do,” she said. “For me, the big picture context that I need to keep in mind at all times is how we want to manage growth in general.”

The details right now are about how the city pays for utilities for Andelina Farms and other future developments on the city’s west side, TerHaar said. “The sewer lines that exist are not in place where it will be easy to serve Andelina Farms,” she said. “It would be nice if there were funds for that, but there just aren’t right now.”

Marl said that he has a good relationship with Saline Township Director Jim Marion, and that both municipalities would like to see developed properties in the township annexed into the city.

Marion said he would like the township to stay rural. But he and Marl have slightly different views on the financial details of annexing.

“I don’t think that water and sewer are the main issues with annexation,” Marion said. “The city should be looking to use its tax dollars over the next five to 10 years.

“We both want to get Andelina Farms into the city. Mayor Marl and I worked together on putting it in our master plans for both the city and township.”

The politics of the situation aren’t important to everyone. Two business owners on the west side of the city said they don’t care what municipality any new developments are in, so long as they bring in more potential customers.

Brian and Anne Shockley own Baker’s Nook, a bakery and baking supply shop located at 901 W. Michigan Ave., which will potentially be close to any new west side developments. They said they’re just excited to have more people on their side of the city.

“I know there’s a lot of talk about new homes and condos over here,” Anne Shockley said. “I’m just hoping it will be big for us.”

Brian Shockley said that it often feels like the west side of Saline is forgotten by many in favor of downtown. Any new housing developments by Baker’s Nook, be them within the city limits or not, are welcomed by him.

“We don’t care where you’re from,” he said. “We just like taking care of people and making them smile.”

There’s an inherent underlying issue with city growth, though, TerHaar said. And it’s a perpetual problem.

“There are some people who don’t want growth, mainly residents,” she said. “I think it’s probably inevitable.

“We have a wonderful community, we have wonderful schools. People want to come live here. You move to a wonderful new place then you immediately want it not to change. You want to be the last new person when you move to Saline.”

Marl said that the Andelina Farms is especially important because it’s a microcosm of the Saline government’s desired growth on its west side over the next 10 to 20 years or beyond.

“Andelina Farms serves as the genesis for a broader discussion about annexation on the city’s southwest border,” he said. “It all comes back to smart, manageable growth.”

TerHaar said she agrees with the mayor, and wants to be considerate of people who want to maintain the community’s values as it gets bigger.

“Andelina Farms is one thing, but there’s the big picture about how we want the city to grow,” she said. “And to do that, you need a way of understanding the people here who don’t want Saline to change.”