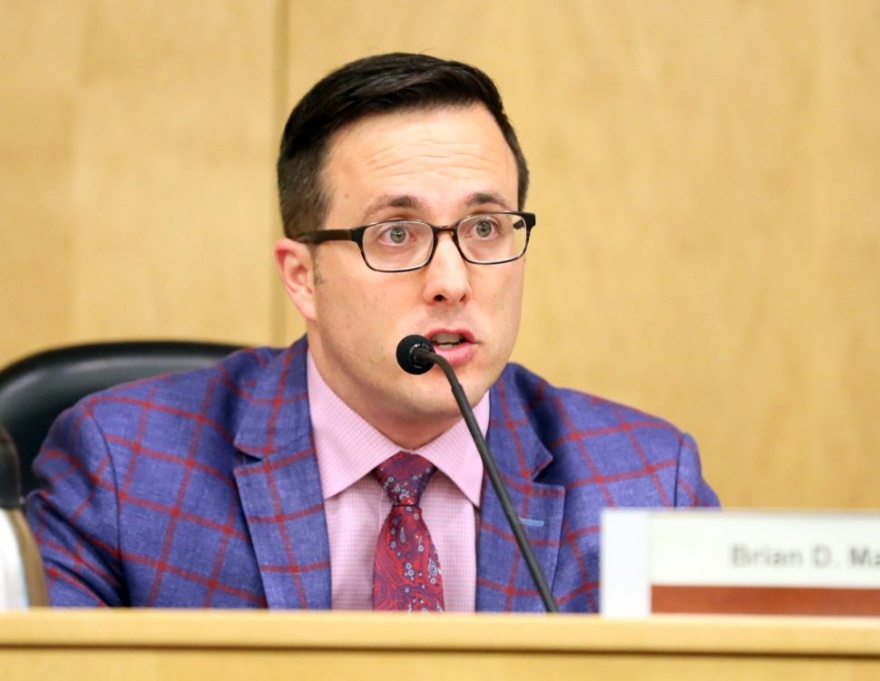 Among meetings with citizens, bringing in jobs and further developing Saline’s economy, Marl says there’s never a shortage of work to be done in his part-time mayoral job.

“No one forced me to take this position. I’m just passionate about the growth of our city.”

Marl was raised in Saline Township, just south of the city limits. In 2005, he moved into the city after inheriting a home from his grandfather.

“My relatives on my mother’s side have been here since the 1880s,” Marl said. “To be candid, I never really thought of living anywhere else.”

He worked in Lansing as a Michigan state representative for 15 years, but said he ultimately sought other work because of the commute to the state capital from Saline.

Marl was elected mayor in 2012, and said that the community, on the whole, is stronger now than when he first took office.

“We’ve increased the economic vitality of the Saline area,” he said. “We’ve brought in more businesses and accomplished a lot as a group.”

One of the ventures Marl said he is most proud of during his time as mayor is bringing an Emagine theater to Saline. It opened in March 2017.

“The Emagine theater is my favorite business that we’ve attracted and one that I’m very proud of,” he said. “The building had been vacant for years.”

“It’s simply a wonderful amenity to add to Saline. There are very few cities of our size in the state or even in the country that can boast having a theater like that. It’s a great quality-of-life enriching business to have here,” Marl said.

Tran Longmoore is the founder, owner and publisher of The Saline Post, Saline’s closest thing to its own print newspaper. He said the mayor suits his position well.

“Mayor Marl is well spoken and articulate,” Longmoore said. “He’s almost always available to citizens who have questions or concerns, and he enjoys being the mayor.

“You can tell he loves being the mayor. He’s a big city politician in a small town. I think he’s always wanted to be in politics, even in high school. I heard that he was reading political biographies even in elementary school.”

When he’s not working on bringing new businesses to Saline or other economic development initiatives, Marl said that an average day at the office is filled with meetings and correspondence with citizens.

“Every day is different, of course,” he said. “But what has never ceased to amaze me is the amount of people who call and email and text me, who reach out to me as the mayor for direction and advice about dealing with local government.”

“When I first started working in Lansing as a constituent service director, I knew immediately that I like helping people get the most out of their government,” he said.

Marl attributes this large amount of citizen activism to the affluent and educated population of Washtenaw County as a whole.

“Elsewhere in the state or the nation it may not be like this, but people here expect a lot from local government,” he said. “They want those working in government to be proactive and progressive.”

Saline’s mayor is considered a “weak mayor” according to Marl, which means the position does not come with many enumerated powers. The mayor largely does not make decisions alone, but does get to be the chair of city council meetings, as well as choose whom to appoint to the council, although the council itself does choose to accept or reject the person nominated.

Linda TerHaar, Saline’s mayor pro-tem, said that she has high praise for Mayor Marl and the rest of her fellow local government employees.

“I like working with the mayor and city staff,” she said. “They’re dedicated to finding what’s best for the community.

“Since I’ve been retired and working Saline’s government, I’ve loved finding out things about the city that I never knew before.”

Marl said he does not have an interest in serving in government at the county level or returning to the state level in the future. He does, however, see himself pursuing opportunities at the federal level, if he comes across them.

“But being mayor of Saline is a great job,” he said. “You have well-recognized executive responsibility, but most of all, you have an impact in the community you serve.”