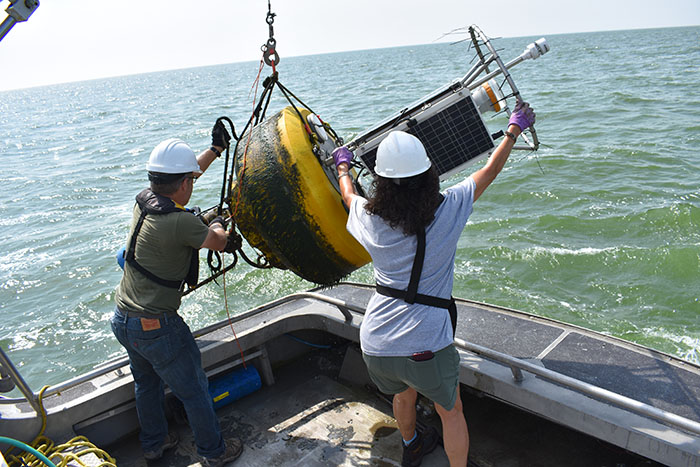 Lake Baikal and the African and American Great Lakes make up over 65 percent of the world’s freshwater. Many of these regions are looking to address the problems but it will take time to see if the harm can be reversed, experts say.

During the summer, a rapid growth of algae is among the most prominent challenges in lakes Erie and Michigan. These algal blooms harm the lakes’ animals and can harm humans as well. The algae produces toxins and create dead zones. It rises to the surface and sucks the oxygen out of the water. Some lake creatures eat algae, but this type, called cyanobacteria, can overwhelm sections of water.

“These blooms really represent an ecosystem that’s out of balance. So, when you get this much growth of algae, it means it’s just not being utilized. Right, it’s not part of a normal food web cycle,” said Tom Johengen, a research scientist from the Cooperative Institute for Great Lakes Research based at the University of Michigan in Ann Arbor, Michigan.

Johengen monitors algae with a series of large buoys throughout the lakes.

On some beaches, the problem can be seen immediately — algae swirl all around, turning the water into a thick green slime. Further out, where a buoy is located, the algae is a bit thinner but still clings to the machine as the team hefts it out of the water.

“Here we’re accumulating an algae that isn’t being eaten and obviously there’s an aesthetic issue—there’s smell and sight issues,” Johengen said. “But more importantly with this particular cyanobacteria, there’s an issue with its production of toxin and the need to remove that from our water treatment plants.”

This alga comes primarily from farm water run-off, through irrigation and rain. It contains things like animal waste and pesticides.

These problems aren’t unique to the North American Great Lakes.

Lake Baikal in Russia is the largest body of freshwater by volume in the world. Lake Superior is larger by area, but Baikal is so deep it holds over 22 percent of the world’s freshwater. Alone, it contains more water than all the American Great Lakes combined.

However, the region only has one water treatment plant, which isn’t enough to combat all the pollution that threatens it.

Last year, as in the North American Great Lakes, large accumulations of algae that can lead to illness also harmed Lake Baikal, according to  France 24 news in Paris. The Siberian lake has seen an unprecedented level of algae, indicating increased levels of pollution.

In July, toxic waste from a nearby power plant turned parts of Lake Baikal bright turquoise. Despite their potential danger, the turquoise beaches have become a popular destination.

On the other side of the world, a crisis looms at Lake Victoria. Part of the African Great Lakes, it’s the largest lake on that continent.

In 2015, a group of Tanzanian students from Roskilde University in Denmark found that micro plastic pollution is one of the Lake Victoria’s biggest problems. Just like in the North American Great Lakes, plastic ingestion has hurt many of the lake’s 200 species of fish.

“What they did was they went to the banks of Lake Victoria in Tanzania, and they bought fish from the market. So these are fish that anyone would buy, but in particular, they asked for the fish not to be gutted,” Khan said.

For his students to determine if the fish were eating plastic, they needed the digestive tracts to remain intact. They looked at several species, particularly Nile perch and Nile tilapia, two popular fish in the region.

“They took these fish back to the lab and they dissected the gastrointestinal tract and they placed it in a strong basic solution. And that degraded all the tissue but it doesn’t affect plastic…. They found plastic in a number of the fish,” Khan said.

In recent years, Kenya, Tanzania and Uganda, the three countries surrounding Lake Victoria, banned plastic bags to keep them out of the water and the food web, both on land and in the lakes.

Ray Garcia reports for WKAR Radio and Great Lakes Echo. A version of this story originally aired on WKAR Radio.