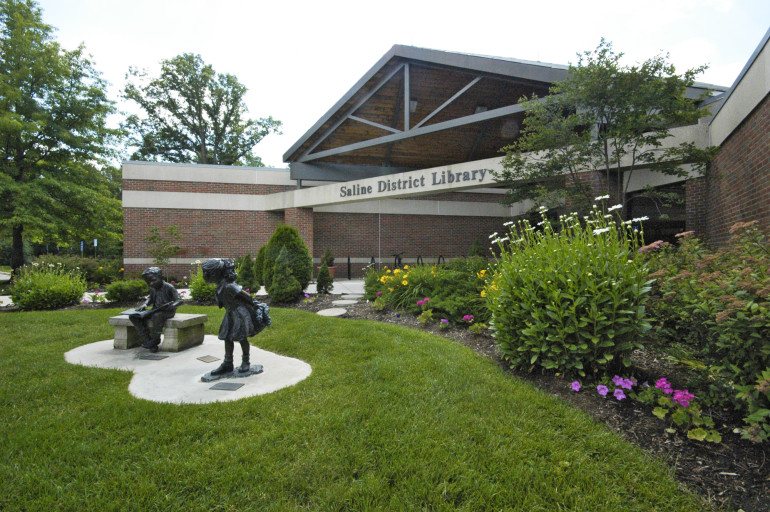 In an overwhelmingly digital age, what role does a local library play in a community like Saline?

Jess Hesselgrave said an important one.

Hesselgrave, head of adult services at the Saline District Library, said she thinks good libraries in towns the size of Saline have evolved to be more like community centers in the year 2019.

“We still have a very high circulation rate for physical materials like books as well as digital materials like DVDs or Blu-rays,” Hesselgrave said. “Plus, our meeting rooms and study rooms are in constant use, and we usually have a ton of people here in general.”

Hesselgrave, who lives in Whitmore Lake and has worked at the Saline District Library for two years after having worked at libraries in Ann Arbor and Salem/South Lyon, said in Saline she has more creative freedom at her job. She gets to try new things, and brings new skills and materials to the library here.

“I’ve worked in a smaller community, and they were very much dependent on reference librarians there – they didn’t want to try anything by themselves,” Hesselgrave said. “In Saline they want to expand their horizons. If someone comes here with a technology question, we want to teach rather than just do it for them like in other libraries in small towns.

“Often times people just come here in the afternoons just to hang out. Especially middle schoolers from next door who might just want to spend some time with friends before their parents pick them up.”

Mary Ellen Mulcrone is the library director. She said that while Saline District Library still offers all of the traditional library services, they have increasingly made more downloadable materials available for checkout.

“We offer some movie streaming services to any library card-holder,” Mulcrone said. “We have different services online that offer access to older movies that might be hard to get access to elsewhere.”

She said that the library is at its best when it can highlight things for people that they might not have otherwise come across, such as a display for something like poetry month.
The library has an “Et Cetera Collection,” which consists of a very wide range of seemingly random items such as yard games, home tools like pipe cutters or even a calligraphy kit, which are all available to check out and rent – for free, just like a book.

“Part of my job as head of adult services is to purchase items for the Et Cetera Collection,” Hesselgrave said. “As well as physical and digital materials for the adult collection, plan adult programs, bring in speakers and presenters and provide new learning opportunities.”

She said teaching the craft class for adults, which draws 30 or 40 people on Monday nights and is one of her favorite things to do at her job, is a great time for friends or couples to just hang out and spend time together while having fun.

The library has different events such as craft classes, a “shred day” where you can bring in large amounts of paperwork as well as numerous events for kids, young adults and seniors. They also can provide things like tax forms for free, and are trying to add a free notary to their services.

Mulcrone said that her favorite event was being a part of the Manhattan Short Film Festival, for which the library partnered with the Emagine Theater in Saline.

“It’s an international event that takes place annually toward the end of September,” she said. “Places all around the world show the same nine or 10 short films, then the audience gets to vote on their favorite.

“We held it at Emagine – they provided the theater free on one of the nights and then we rented the other. It was a two-night event last year, but this year it will be three because it was so popular. You have to get a ticket, but they’re still free.”

Terry Morris is a volunteer with Friends of the Library, an independent group of volunteers that operates the Corner Book Shop within the Saline District Library itself.

Morris said that the Corner Book Shop is full of people who are passionate about the library and its service to the community.

“We’ve gotten a bunch of volunteers who either worked at the library and retired, or people who started here then went on to work for the library,” she said. “We also do other things like help support the summer reading program so they library can use their money elsewhere.”

Hesselgrave said one thing she’d like to see the Saline District Library do more of is outreach with other organizations in town, specifically the senior center, but that time is always the limiting factor for her.

“I’d like to be able to have more time to take books to different assisted living facilities and be able to provide them with better access to the different kinds of information we have here,” she said.

“I like Saline because it’s a very small town feel, and the library has expanded a lot in recent years. It’s close enough to Ann Arbor but still a lot less pretentious.”