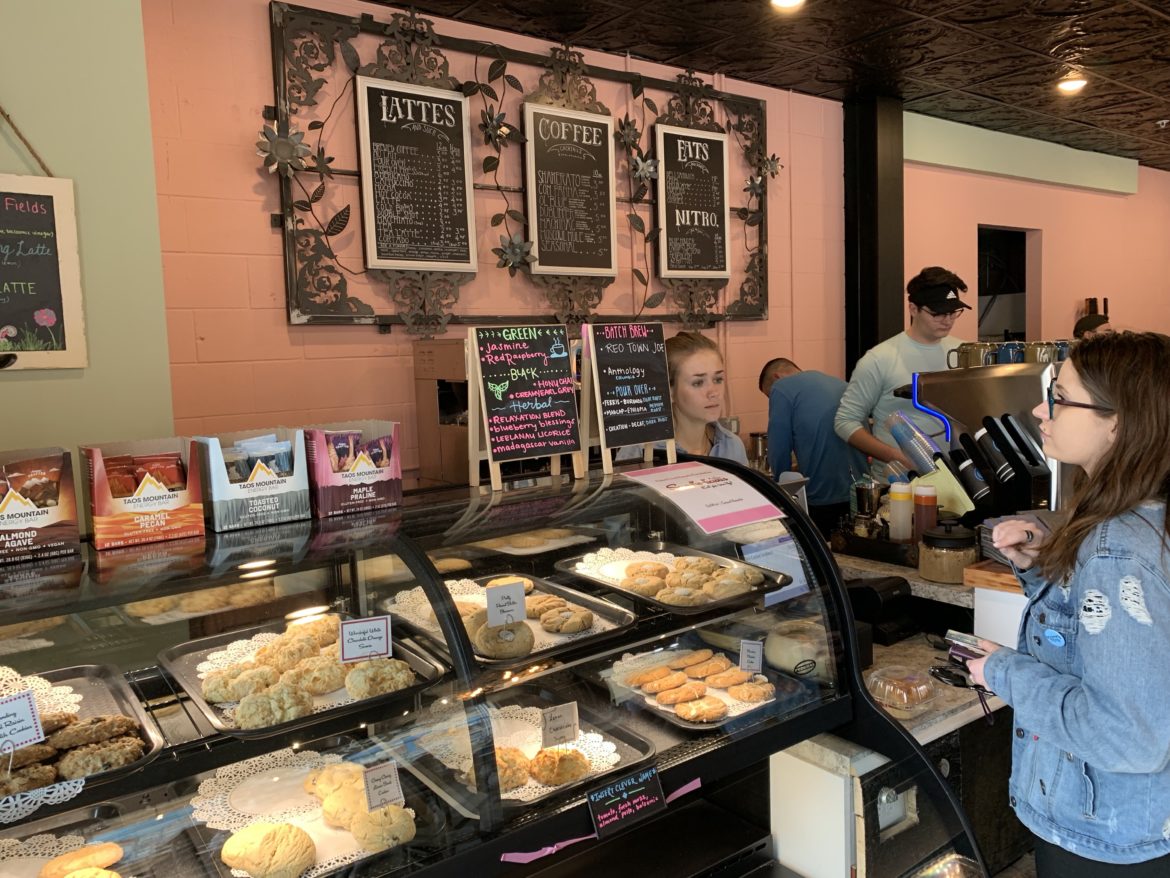 The menu at Blue Owl Coffee features drinks that take a spin on classic cocktails such as the Mackinac, which is inspired by a Manhattan. Craft coffee shops are a growing part of the coffee market.

Behind the bar there are a variety of dark colored bottles with handwritten labels and eye droppers to ensure perfect measurements. The handwritten menu has descriptions of coffees and flavorings that baristas mix to order.

The low murmur of customers working together and studying is broken when a barista calls out a name and pushes one of the coffeehouse’s signature coffee cocktails, a Mackinac, to the edge of the bar.

It’s a scene that’s repeating itself across the country as craft shops take a growing share of the coffee market.

“We felt like East Lansing in particular didn’t have much of a voice other than being associated with the university and being a bar-driven area, and we wanted to provide a space with no age limits where people can come together and hang out, maybe be creative together,” said Rich Whitman, co-owner of Blue Owl.

“We loved the idea of being an incubator. Back in the day, coffee shops were a place where people who didn’t even know each other would sit in ears distance of each other and next thing you know, those two people who have never met each other are conversing about ideas.”

According to the National Coffee Association, daily specialty coffee drinks has seen the strongest growth in the coffee market over the last two decades. Specialty coffees are considered to be gourmet beverages. These beverages require extra attention from harvesting to brewing.

The number of U.S. adults who drink specialty coffee went from 9% in 1999 to 41% in 2017. Coffee experts and baristas say they’ve noticed many consumers want a social experience rather than brewing their own coffee at home, according to Corporate Essentials.

And building that experience means creating products with a unique edge. This can mean anything from owners building relationships that allow them to work directly with farms and roasters, to roasting their own beans, to creating their own unique beverages that you can’t find anywhere else.

“We have been seeing coffee bars of all shapes and sizes trending in the United States recently because they are filling gigantic pockets all over where the coffee consumer is completely underserved,” said Bruce Milletto, president and chairman of Bellissimo Coffee Advisors, an Oregon-based consulting company.

Bellissimo offers workshops for businesses, baristas and roasters to learn about the specialty coffee business. Milletto said consumers are looking for a “third place” that had previously been poorly defined in the U.S.

“The first place would be your home, the second place would be where you work or go to school and the third place is where you can go to unwind,” Milletto said.  “It feels comfortable, it feels non-threatening and it’s desirable.”

At Blue Owl, the craft coffee shop offers events such as open-mic nights at its location in Lansing and hopes to bring a similar environment to its East Lansing location.

In addition to serving as a welcoming and creative space, many of these coffee shops offer drinks that are unique from national coffee chains with fixed menus. Blue Owl uses handwritten boards to create interchangeable menus behind the bar to constantly change up what they offer their consumers.

“We’re always trying to do things that just excite us and that we think would be exciting to customers,” said Nathan Hamood, president and director of coffee, roasting operations at Dessert Oasis Coffee Roasters. “We’ve added coffee cocktails to our menu to help people understand the different flavor notes that they would find in a coffee. We thought it was a good alternative to having a bunch of crazy sugary drinks.”

Tom Vincent, president of the Texas Coffee School, said he has seen a trend in people being interested in creating drinks with no artificial ingredients that show off the elements of the coffee bean.

“We are seeing a lot influences coming in from outside the coffee industry. Specifically, other craft beverages, for example the craft cocktail industry,” Vincent said. “We have seen a lot more signature drink development that’s inspired by some of the flavors found in the cocktail mixology world. The point is to keep it approachable so that your average person can enjoy it.”

In Ypsilanti, Cultivate Coffee and Taphouse adds alcoholic beverages to its menu alongside its coffee. Cultivate makes all its syrups in house and rotates them on seasonal menus with coffee mocktails and alcoholic counterparts.

Owners Bekah and Ryan Wallace said they started the business because they wanted to create a place where everyone could feel welcome, as well as celebrate what they already loved to do, which was to create craft beer.

“We had thought a lot about what it would be like to have a community space and Cultivate was kind of just an evolution of all of our personal passions around community space and philanthropy,” Bekah Wallace said. “We knew coffee and beer would be a good vehicle to surround that with because that was what we were spending all our time and energy doing with our friends.”

Cultivate roasts in shop, which the Wallaces say gives customers more control of their coffee from bean to cup.

Tom Vincent, president of the Texas Coffee School, said the key to success for any craft coffee house is understanding proper technique and ingredients.

“People don’t realize it, but coffee can taste pretty darn fantastic when you respect the ingredients. Unfortunately, a lot of places don’t, and they don’t understand the chemistry of extraction,” Vincent said  “Your mouth has a very specific reaction to poorly brewed coffee which leaves you craving milk and sugar and additives because it’s bitter.”

“But when it’s brewed properly, it’ll make your mouth water the same way it would if you were to have cream and sugar. So you might find that you don’t need all that stuff.”