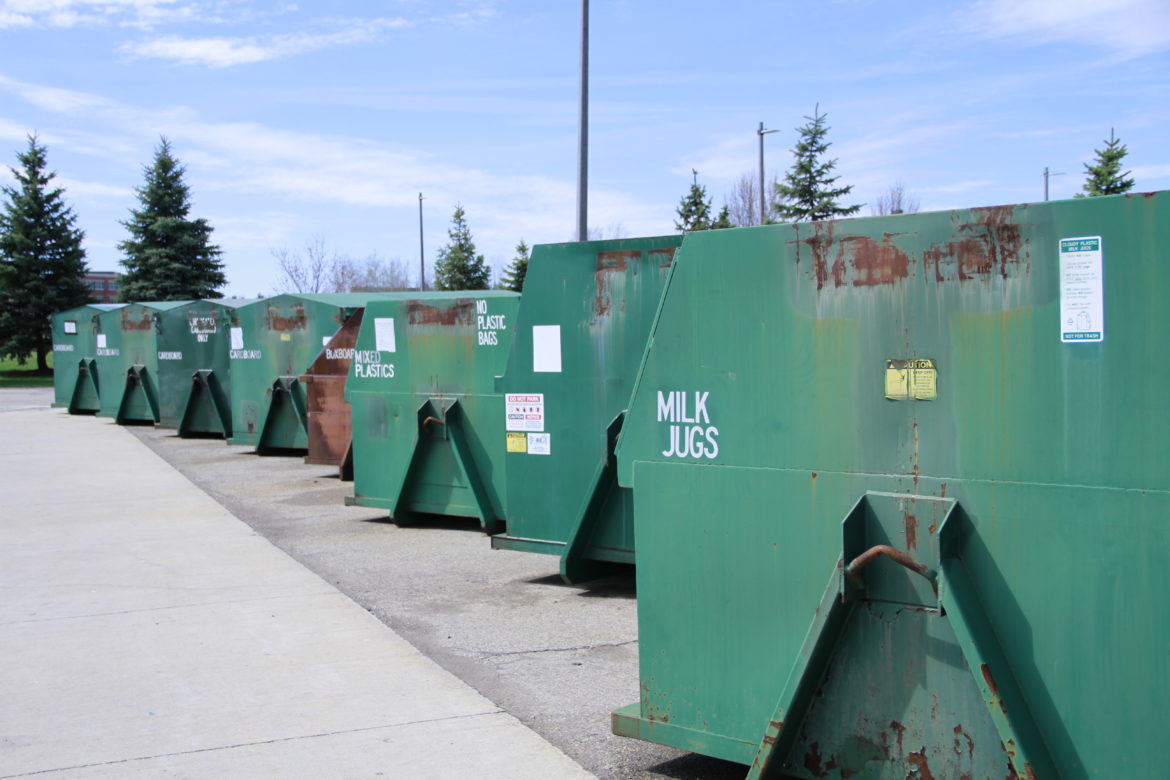 The East Lansing recycling drop-off center provides local residents with pre-sorted recycling bins as a supplement to its single-stream curbside recycling program. Costs to run programs like this one are rising significantly.

Sharply higher costs are putting strains on community recycling programs — even pushing some cities to send all of their waste to landfills instead.

The problem is due in large part to the trade war with China, once the largest buyer of recyclable materials from the U.S. In January 2018, China imposed tariffs and bans on Americans’ waste materials like cardboard and plastics. That’s led to a steep drop in the price waste companies can get for raw recyclable materials. Recyclers have increased fees for processing cities’ waste to make up for those losses.

Lansing paid $6.42 per ton to recycle waste gathered from its curbside recycling program in January 2018. By January 2019, that price had risen to $91.43 per ton, said Lori Welch, environmental specialist for the city’s Capital Area Recycling & Trash program.

“We’re experiencing higher processing cost,” Welch said. “It’s something we’re paying very close attention to. We’re trying to look at all of our contracts to determine what we can do differently to make things more efficient and save money wherever we can.”

One way communities are trying to cope is by reducing added costs their programs face from improper recycling. The wrong recycling efforts can contaminate the whole recycling stream, adding an additional processing fee or even turning those recyclables into the trash, Welch said.

To continue controlling and reducing the contamination, Welch said more education is needed.

“Continuing to educate people about contamination, that has been the number one priority for a long time and will continue to be,” Welch said.

The dangers of ‘wish-cycling’

“‘Wish-cycling’ is one of the leading causes of contamination,” said Kathy Trent, a senior public affairs manager for the Ohio area at Waste Management. The Houston-based company is the largest recycler in North America, providing recycling and trash disposal to communities.

“Contaminants can impact good recycling programs by increasing costs, reducing efficiencies of processing, and lowering the value of commodities,” Trent said. “Currently, contamination levels average around 25 percent of the material put in the average recycling bin (at Waste Management).” Lansing-based Granger is a private recycling company that provides trash and recycling services across Michigan. It takes “wish-cycling” as one of the most significant challenges in its single-stream recycling program, said Phillip Mikus, manager of the company’s recycling center.

“Things like hoses and plastic bags, those are items that can get tangled up in the recycling process,” Mikus said. “We want to get the message out that if you’re in doubt whether to recycle, throw it out. It’s better to throw it out than to put it in and contaminate the recycling stream.”

Lansing and East Lansing maintain an acceptable contamination rate within 10 percent, which has helped keep some costs down, officials with the cities’ waste programs said. Both communities try to educate people to recycle the right items.

The East Lansing Department of Public Works sends out a newsletter and recycling guide twice a year to every resident. City officials also try multiple other ways to educate residents, including delivering information on social media and the city’s website, and attaching a warning tag on recycling bins that are found to include unacceptable materials. The East Lansing Department of Public Works provides the recycling guide in its office and sends them out to local residents twice a year.

Residents of Lansing also get a tag if they put unacceptable materials in their recycling carts for the first time. If this happens again, the city may send a letter to the residents or remove recycling carts from the property.

“We’re pretty aggressive about contamination here,” Welch said. “But we try to educate first before we do that.”

Green Living Science, a nonprofit organization based in Detroit, focuses on recycling education. The organization has offered educational programs for Detroit public schools since 2007.

“We work with the students, really teaching them about the process of sorting between trash and recycling,” said Mary Claire, education director at the Green Living Science. “It’s more about recycling right versus just getting more and more participation,” Welch said. “Participation is important because we want people to do it. But they have to do it right.”

Clinton County resident Dennis Mayes, who has been recycling since 1970s, said he has a clear understanding of recycling right.

“I learned it from PBS and WKAR,” he said. “There is lots of education on TV.”

Putting types of recyclables in just one recycling bin might sound convenient to the general public, but not to Mayes.

“I’ve heard about some news that some cities sent recyclables to the incinerator or landfill. I think that’s bad,” Mayes said.

Stacy Wohlscheid, a resident of the north side of East Lansing, said she learned recycling from her family since she was a child. She said pre-sorted recycling is convenient and cost-effective.

Cathy DeShambo, the environmental services administrator at the city of East Lansing said the city has a population turnover rate — largely because of its population of Michigan State University students — can make keeping the public educated a challenge.

“That’s pretty challenging because we have a very small staff so that makes it a little bit challenging to get all that information out continuously to folks,” DeShambo said.

As Lansing is facing the higher cost of recycling, “the city is absorbing those costs and relying on the revenue generated by the annual fee assessed to single family property owners in the city of Lansing,” she said..

Welch said Lansing is looking for other grant funds to supplement some of the higher cost of recycling.

In December 2018, Michigan secured an additional $15 million in its Renew Michigan Fund annually for materials management planning, local recycling programs and recycling market development, said Emily Freeman, a recycling specialist for the Lansing and Jackson districts at the Michigan Department of Environment, Great Lakes and Energy.

“Most of our grant opportunities haven’t closed yet, but based on the level of inquiry I’ve received so far, I think the demand for funding will be high,” Freeman said.